Sightseeing in Toulon - what to see. Complete travel guide 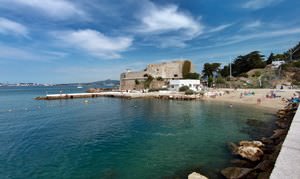 This is one of the most beautiful cities in France. It was founded by the Phoenicians in the 5th century. The main occupation of first settlers was mining of precious purple paint. Because the deposits of this paint are extremely rare, the settlement has quickly become a famous center for commerce that has attracted a large number of people. However, it was Napoleon Bonaparte, not craftsmen, who made this city famous. Here started the career of the great emperor.
The proximity to such popular resort cities as Saint-Tropez and Marseille has made Toulon a popular tourist destination. During the past few decades here have been built several modern hotel complexes, and have been opened hundreds of restaurants and cafes. Walks through the picturesque port area and sightseeing remain the main entertainments of visitors.
Almost all sightseeing tours start with a visit to Royal Tower, the building of which was completed in the 17th century and lasted more than a hundred years. You will see really many squares in the city. Almost every square surrounds some historic monument. Louis Blanc Square attracts visitors by the largest fountain in the city, which is called Tambourine. Both local residents and tourists enjoy walking around it. Saint-François de Paul Church is located nearby. This is a beautiful Baroque building. Lovers of theatrical art should definitely go to Victor Hugo Square, where is located the most popular theater in Toulon. Its courtyard is decorated with beautiful flower beds and one more remarkable fountain named Three Dolphins. Copyright www.orangesmile.com
The city has traditionally become the venue for many celebrations and festivals throughout the year. Here take place an exhibition of plants, a film festival and an international jazz festival, as well as numerous art exhibitions. 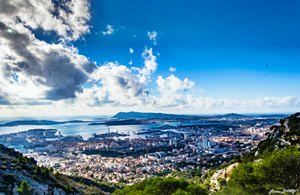 Murion is one of the city's most picturesque areas. This district once used to be a separate fishing village. It was attached to the common townsite after the harbor had been constructed. Nowadays, the area attracts travelers with wonderful beaches, an abundance of fish restaurants and a historic fish market. In a warm season, travelers are usually offered fascinating boat trips. While walking around, you can see plenty of beautiful old houses.
In the very center of the city, the historical garden of Alexander I is found. It got its name in honor of the King of Yugoslavia. You can go anywhere here among the branchy cypresses and sycamore trees. The old royal park is nearly 200 years old. The garden became accessible to the public in 1852. Today, one of the cypresses 33 meters high is considered to be its main attraction. There're an artificial fish pond, playgrounds for children, recreation areas, and an attractive cafe on the territory of the garden. 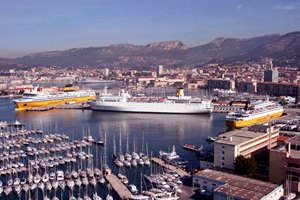 Anyone interested in history should visit the National Naval Museum. The palace that houses the museum has a great historical value. It was built in the 18th century and is one of the few buildings in the city that managed to survive during the Second World War. The museum was opened in the palace in 1814. Among its exhibits are old military maps and documents, artifacts related to important events in the history of the city. The museum has a great collection of models of old ships, some of them are of impressive size.
Faron Mountain will be a great place for hiking. The most popular viewing platform in the city is found on its top. One can easily get there by car, however, many tourists prefer cable railway. At the top of the mountain, fragments of old fortifications destroyed during the war years have been preserved. The thematic museum dedicated to the events of World War II tells about those times so difficult for the city. There is an excellent zoo at the top, as well, where you can see animals from all over the world.
This guide to iconic landmarks and sights of Toulon is protected by the copyright law. You can re-publish this content with mandatory attribution: direct and active hyperlink to www.orangesmile.com.

City tours, excursions and tickets in Toulon and surroundings

Survived castles around Toulon
♥   Castle 'Château de Ners' Bouches-du-Rhône, 43.2 km from the center. On the map

♥   Castle 'Château de Vernègues' Bouches-du-Rhône, 86.7 km from the center. On the map

National and city parks around Toulon
♥   Regional Nature Park 'Verdon' , 70.7 km from the center. On the map

♥   Regional Nature Park 'Baronnies provençales' , 153.9 km from the center. On the map

Sights around Toulon from our guide 'Extreme places on Earth' 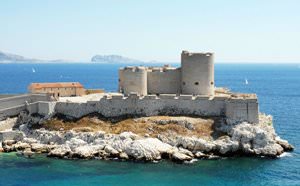 Distance from Toulon center - 52.7 km.
Man in the Iron Mask was another world-famous prisoner, who praised the Chateau d If. It is noteworthy that neither he nor Edmond Dantes ever served a sentence at the fortress. All the beautiful stories and legends about them are just fiction. Excursions to the fortress remain one of the favorite entertainments for guests of Marseille. They are offered a lot of interesting entertainment here. Fascinating tours of the old prison cells are held in the castle. Various cultural events are also arranged here. The cafe is located in one of the open areas of the fortress today. Its visitors can enjoy a romantic panoramic view of Marseille. … Read further 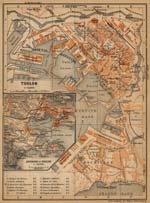 Search touristic sites on the map of Toulon

Sightseeing in regions nearby Toulon

Marseille
Marseille is a large city in France, which occupies the second place in terms of size with Paris on the top. Marseille is the most important industrial region of France, however it also represents large cultural, architectural and historical heritage of the country. Marseille occupies a truly advantageous location on the coast of the Mediterranean Sea. An ancient port that ... Open »
Saint-Tropez
Saint-Tropez is a popular holiday resort situated in the south of France. While mentioning this name the majority of people get an image of a beautiful harbor full of sailing ships of light, elegant yachts, luxury boats rising above houses of movie stars and celebrities. St. Tropez, as well as many other port towns, was originally an obscure fishing village located near Nice. ... Open »
Aix-en-Provence
This region became a center of trade and high culture in the 15th century. University education developed in the region quickly. The Duke of Anjou liked parties and holidays, so different celebrations became more frequent during his reign. Many of these events lasted several days. By the end of the 15th century, Provence became a part of France, and this region got the status ... Open »
Cannes
Cannes is an international cinema center and one of the most luxurious resorts. The city is able to accept visitors all year long as during the majority of days the weather here is sunny, beaches lure by clean gold sand, and amazing sights never stop amazing travellers. The Promenade de la Croisette is one of the most famous sights of Cannes. Once it has been a simple cart ... Open »
Antibes
The so called Old City is the best place to watch numerous ancient buildings and see the most notable sights of Antibes - Chateau Grimaldi and Church of the Immaculate Conception. These building were created in the 12-13th centuries and stayed in almost perfect condition up to our days. The castle was significantly expanded in the 16th century and in 1925 it was decided to ... Open »
Arles
The city sided with Julius Caesar in his battle against Pompey, and this was like a breath of fresh air. Roman colonizers set up their authority in the region, and Arles started developing actively and expanding in size. Local streets became more comfortable because of pedestrian areas. Romans also built the first theater in the city, an arena, public baths, and a ... Open »

All about Toulon, France - sightseeings, attractions, touristic spots, architecture, history, culture and cuisine. Prepare your trip together with OrangeSmile.com - find out the 'must see' things in Toulon, which places to visit, which excursions to take, where the breathtaking views are waiting for you. Planning your trip with this travel guide will help your to get the most out of Toulon in few days.