Sightseeing in Nancy - what to see. Complete travel guide

Originally the town was founded as a duke fortress and was called Nansiakum. Today this is a popular French resort, a picturesque town and the best place of rest for tourists who enjoy exciting excursions.
Your active city break in Nancy. Attractions, recreation and entertainment - best places to spend your day and night here
The city and its suburbs provide a wide choice of entertaining facilities. Fans of shopping and active rest, and even outdoor activities followers will easily find a pastime to fit their …

Open
The National Museum of Fine Arts is one of the oldest cultural centers of Nancy. It was founded in 1793. Currently the museum undergoes a major reconstruction. The main part of the halls offers a collection of paintings referring to 17 - 19 centuries. Here you will also find several exhibitions devoted to items made of crystal. The excursion to the Museum of the School of Nancy, which was opened in 1964, will be no less interesting. The museum was opened in the building of a beautiful villa which is surrounded by a spacious park. Once you’re done with the museum’s exhibition, you can go to the park, where guests will find one more surprise - a large aquarium. You can also learn about the history of the city and see the collection of valuable artifacts in the Historical Museum of Lorraine. Besides other items, here are exhibited several collections of prints and paintings made by modern artists. This museum is also surrounded by a park, on the territory of which is located the Franciscan church.
The most well-known religious landmark of this place is Nancy's Cathedral, which is considered a national monument since 1906. The construction of the Cathedral was completed in the middle of the 18th century and lasted more than 50 years. After visiting museums and galleries it is time to move your feet to the Stanislaus Square as the Town Hall and the House of Government are located there. In the center of the square you will see a monument of Stanislas, who has been the main designer of the square. Perhaps, Jardins du Monte Botanical Garden is among the most wonderful places in Nancy. Here you will find a collection of plants and flowers, the number of which has long exceeded 12 thousands. Despite the fact the garden occupies quite a small area, its greenhouses look really huge, and the diversity of plants is truly amazing. Copyright www.orangesmile.com
Advices to travellers: what you should know while being in Nancy
1. Local people devote much time to eating. Those travelers wishing to have diner in one of the local restaurants should take care of table reserving in advance as finding a free table in …

Open
In the immediate vicinity of Nancy, there is the beautiful Montague Castle built in the 18th century for one of the wealthy royal officials. Over the years, the castle has changed a lot of eminent owners. In the late 19th century, its last major reconstruction took place, after which it remains unchanged. In the early 20th century, the owner of the castle was the famous archaeologist Eduard Salin who kept a unique collection of ancient finds within its walls. The castle has been converted into a museum housing a rich collection of antique furniture and works of art in addition to archaeological finds. 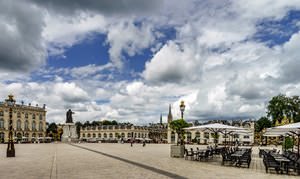 One of the most beautiful places in the city is the charming Pepiniere Park. In the middle of the 18th century, there was a nursery used for growing seedlings on its territory. This green place was converted into a public park only by the mid-19th century. Currently, the park accommodates a puppet theater as well as many sports grounds and venues for holding concerts and other entertainment events.
Shopping in Nancy - main shopping streets, outlets and boutiques
One of the most interesting places for shopping in Nancy is the covered market Marche Couvert de Nancy where you can buy the most popular national products. The market is distinguished by a …

Open
An important religious site of the city is the Church of Saint-François-des-Cordeliers. It was built in the 15th century and originally belonged to the Order of the Cordeliers. After hundreds of years, the church retains its strict appearance. Many tourists are attracted by its unique interior decoration: the walls of the church keep wonderful murals as well as decorative elements of stone and wood. 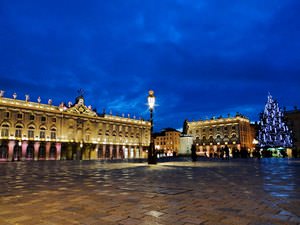 The only surviving part of old fortifications is Porte de la Craffe Gate built in the 14th century. Throughout the centuries, the gate has been repeatedly rebuilt and acquired its present look by the 19th century. At one time the gate served as a prison, but today it is one of the main historical symbols of the city.
Family holidays with kids in Nancy. How to entertain your child, things to show to children.
Nancy is perfect for a quiet and measured vacation with children. The city has many beautiful parks and entertainment centers to offer families. One of the best on this list is Pole …

Open
Walking along the Place Stanislas, you can see the elegant arch of Héré in its northern part. The beautiful arch was erected on the site of the ruined royal gate by order of Stanisław Leszczyński who has dedicated this remarkable architectural monument to Louis XV. The arch is decorated with exquisite sculptures and interesting memorable tablets with the dates of important historical events.

This guide to iconic landmarks and sights of Nancy is protected by the copyright law. You can re-publish this content with mandatory attribution: direct and active hyperlink to www.orangesmile.com.
Nancy - guide chapters 1 2 3 4 5 6 7 8

Shopping streets in Nancy
♥   Shopping area ' Rue Gambetta' Nancy, 0.2 km from the center. On the map

Survived castles around Nancy
♥   Castle 'Château de Dieulouard' Meurthe-et-Moselle, 18.6 km from the center. On the map

♥   Castle 'Château de Pierrefort' Meurthe-et-Moselle, 24.3 km from the center. On the map

♥   Castle 'Château de Mousson' Meurthe-et-Moselle, 24.7 km from the center. On the map

♥   Castle 'Château de Bainville-aux-Miroirs' Meurthe-et-Moselle, 26 km from the center. On the map

National and city parks around Nancy
♥   Regional Nature Park 'Lorraine' , 24.9 km from the center. On the map

Art galleries in Nancy and around
♥   Art museum 'Musée des Beaux-Arts' Nancy, 0.1 km from the center. On the map 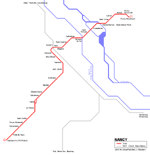 Hyatt offers guests who work remotely to stay at comfortable hotels and work from different parts of the world. The hotel brand has hotels in London, Dublin, Vienna, Paris, and many other popular cities, and all of them are eligible for the new offer. To be able to enjoy a special rate, guests need to book a hotel for at least 29 days. All Hyatt hotels in Europe, Southwest Asia, the Middle East, and Africa participate in the promotion.

Search touristic sites on the map of Nancy

Sightseeing in regions nearby Nancy

Metz
St. Etienne Cathedral built in the gothic style is one of the main attractions of Metz. This is also one of the largest religious buildings in France. Near the central square of the town is located the Museum of Art and History, which halls exhibit numerous items that tell about most significant moments in the history of Mets. The city is located in close proximity to the ... Open »
Saarbrucken
Ludwigsplatz Square is another remarkable place for tourists. The main decoration of this square is Ludwigskirhe Church. This is one of the most beautiful buildings made in best traditions of the baroque style. Visiting museums and exhibition centers will help you to diversify your program of rest. Tourists can get acquainted with the history of this region by attending ... Open »
Dudelange
Fans of peaceful and trouble-free relaxation will be simply in love with local centers, parks, and venues. For example, fans of camping will be able to spend some great time at Parc Le'H Dudelange, Gaalgebierg, or Cottage Sàrl. They have everything needed for a pleasant and comfortable stay. Parc Le'h Adventures has a zip line that is like a magnet for all fans of active ... Open »
Alsace
The capital of the province is Strasbourg, the city with a long history. It is located in the heart of Europe at the crossroads of major trade routes. Shoppers will enjoy local shopping malls and markets. The most striking tourist attraction is Notre Dame Cathedral. The construction of this magnificent Gothic building has begun in the 13th century and lasted for more than 150 ... Open »
Luxembourg
Shopping. Luxembourg is a good place for shopping. Here you will find all kinds of shops, starting from most fashionable shops and expensive boutiques with designer clothing to more democratic brands. A huge part of the city is a pedestrian zone, and this fact certainly makes shopping even more pleasant. Fans of exciting night life may consider the city quite a boring one, ... Open »
Strasbourg
The old part of the city is home to numerous buildings of 16 - 17 centuries. Walk along these streets, and you will see many old houses with cozy patios. Nice souvenir stores and craft shops have been opened in the majority of buildings, so visitors will find here much interesting. If you arrive to Strasbourg on Christmas Eve, you will simply not recognize the old quarters. ... Open »

All about Nancy, France - sightseeings, attractions, touristic spots, architecture, history, culture and cuisine. Prepare your trip together with OrangeSmile.com - find out the 'must see' things in Nancy, which places to visit, which excursions to take, where the breathtaking views are waiting for you. Planning your trip with this travel guide will help your to get the most out of Nancy in few days.