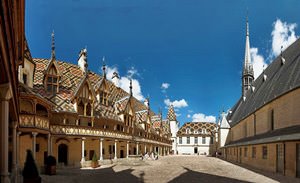 French cuisine is the standard of elegant and refined cuisine. It is widely appreciated by gourmets all over the world. Famous frog legs, cream-brulee and foie gras have made it one of the most popular, however these dishes are far from everything the cuisine of France is famous for. Traditionally, it is divided into two major directions - regional and aristocratic. The dishes of aristocratic fine cuisine are classics for many restaurants; these dishes are distinguished by the complexity of cooking and variety. The cuisine was formed during the reign of the Bourbon dynasty, Paris in those years was the center of world fashion in everything. Regional national cuisine for centuries has evolved in different regions under the influence of farming or climate specifics.
For active traveler - national parks, landscapes and nature of France
France is rich not only with cultural attractions. On its territory, there are 10 picturesque national parks carefully protected by the state. The …
Read further
In the southern regions of France, Mediterranean cuisine is common. In the northern regions, more nourishing "heavy" meals are preferred. In the borderlands with Germany, the traditional traits of the German national cuisine are traced. In Alsace they prefer heavy, nutritious food; the main side dish for meat is stewed cabbage. The cuisine of Provence is distinguished by its exquisite tastes; local chefs use a large number of spices and seasonings. The cuisine in the region is lighter, much attention is paid to vegetables, and mainly olive oil is used. Normandy - the northern region of the country is famous for its apple plantations and apple pies. In Burgundy, during the preparation of dishes, wine is traditionally added in them; this gives them a unique taste.
The French do not really like fast food, it contradicts their gastronomic predilections. Locals like long feasts, during which you can conduct fascinating conversations and enjoy delicate dishes for several hours. This way of eating is contrary to the philosophy of fast food. The meal begins traditionally with snacks, and then the French necessarily eat soup, main course, salad and dessert. Cheese is of great importance in French cuisine. Soups with a transparent broth were invented by the French, although modern cuisine offers a great variety of soups-purees. In France, breakfast starts with fresh baguettes or croissants; which are a real symbol of the country. Another addition to the meal is wine; French sorts of wines are recognized as one of the best in the world. Copyright www.orangesmile.com
Best visiting periods - the climate of France
France is considered one of the largest countries in modern Europe. The territory from the north side is washed by the Atlantic Ocean and from the …
Read further
The most recognizable French dish is the "frog legs", because of which the French were even glued to the offensive nickname "Frogs". However, this dish in France is a delicacy and is served only in several restaurants. The country is the largest importer of frog legs from Asian countries, and therefore the delicacy can always be found in stores as a semi-finished product. Another attraction of local cuisine is the French baguette, which is long narrow bread. Only in Paris, about five hundred thousand baguettes are sold daily. The most popular soup in the country is onion soup, which appeared in the French menu during the Roman Empire. For this dish, the onion is sautéed for 30 minutes, until the sugar in it is not caramelized, after which, broth, wine, cognac and spices are added to it. 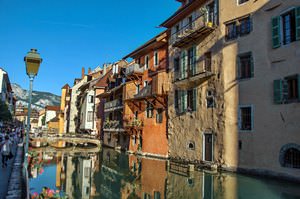 Among the second dishes are very popular coq-au-vin, galantine, and ratatouille. Coq-au-vin means a cock in wine, often cooked in different regions, but the birthplace of the dish is traditionally considered to be Burgundy. Preparation of the dish is a real ritual; you need to use the whole cock body and wine which will be served at the table. The dish is served with French baguette. Galantine is a jellied dish made up of forcemeat and chicken minced meat with the addition of eggs and spices. Ratatouille is prepared from fresh squash, eggplants, and tomatoes and is seasoned with classic Provencal spices. Another famous French dish is foie-gras: pate made of goose’s liver with spices, local truffles and cognac. The geese are fed exclusively with corn grains.
Overview of the optimal transportation means in France
France is one of the most economically developed countries in the European Union. This explains why there is such a high-quality transport …
Read further
The main French desserts are meringue, éclairs, cream-brulee, macaroni, and profiteroles. The French are recognized masters of confectionery. In France, more than four hundred kinds of different cheeses have been officially registered. The most popular and famous are Camembert, Roquefort, Brie, Tomme, and Blue. Sauces are obligatory for dishes, their diversity in the French cuisine is amazing - more than three thousand species. Another property of the country is wine. Annually in France about ten billion bottles of wine are produced. The classical wine-growing regions are Burgundy, Bordeaux, Alsace, Savoy, and Provence.

Cuisine and restaurants in popular cities of France

Paris
The opening of La Tour D'Argent restaurant took place in 1582. The restaurant is located in the famous Silver Tower. Among the specialties of this luxury dining facility are sturgeon hodgepodge and Rouen duck. The order can be supplemented with rare wines. La Tour D'Argent is the oldest restaurant in Europe and one of the most important sights of Paris. The restaurant named Lucas-Carton features widest choice of international cuisine. Risotto with herbs and seafood, lobster, salmon and juicy … Read more

Nice
The menu of Wayne's restaurant contains dishes from various international cuisines, and the restaurant with the sonorous name Le Bar du Coin is one of the best dining facilities of the city specializing in cooking local food. At a glance, the restaurant’s menu may seem somewhat monotonous - traditional pasta, risotto and pizza are the basis of dishes served here. However, the meals are cooked in accordance with various recipes, so each dish is unique. Le 22 Septembre restaurant will please … Read more

Cannes
La Creperie is a cozy pancake bar that serves visitors every day starting from early in the morning. This place traditionally attracts fans of flavorful coffee and fresh pancakes. Fans of meat dishes will surely like pancake cake, and sweet tooth visitors should not forget to try amazing pancakes with fruit toppings. La Creperie is distinguished by attractive prices. A portion of pancakes will cost no more than 11 euros. Cinquanta Caffe is considered one of the best Italian restaurants of the … Read more

Lourdes
It is also interesting that citizens often eat not meat or fish with a side dish but soup for dinner. Cooking soup was a real test of the cook's patience a few centuries ago. Hundreds of ingredients were included in many varieties of this dish. Of course, such difficulties have faded into the background today. However, the soup is still cooked with great care in Lourdes. You should taste, for example, julienne soup with meat or fish broth. You should not think that you will certainly find … Read more

Lyon
If you're fan of Japanese cuisine, we can recommend the Wasabi restaurant. Sushi is considered the specialty of this dining place, but its menu offers even the most unusual delicacies. Despite the fact that the hall of the restaurant is decorated in the most simple and unpretentious style, it looks amazingly beautiful. Exquisite paintings depicting cherry blossoms, fresh flowers on the tables and beautiful wooden furniture are parts of stylish decor that will make a meal even more enjoyable. … Read more

Toulouse
The Moroccan restaurant Le Ksar is very popular among locals and visitors alike. Decorated in a traditional style it is ready to offer visitors classic couscous and tagine, as well as a large selection of sweets. Impressive size of dishes remains one of the main distinguishing features of the Le Ksar restaurant, so it is appropriate to order one dish for two. The French restaurant l'amphytrion has repeatedly won honors for the high quality of dishes. It remains a favorite destination among … Read more

Strasbourg
Originally decorated S'kaechele restaurant is another choice to explore national food. A huge selection of meat meals, as well as great desserts and vintage wines will please every visitor. S'kaechele offers a lot of pork dishes, but house specialties are strasbourg salad and foie gras. One of the best Italian restaurants in the city is Il Paradiso. Top-notch service, excellent meals quality and picturesque terrace are only few of its advantages. Traditional Italian dishes are cooked … Read more