Sightseeing in Bordeaux - what to see. Complete travel guide 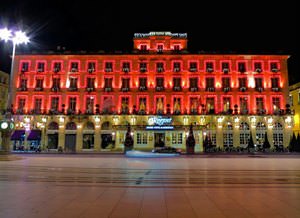 Bordeaux is a wonderful place and the fifth biggest city of France. It’s worth mentioning that Bordeaux is located nearby the capital of the country and it takes around one hour by plane to reach this city from Paris, or you can get a ticket to one of high-speed trains that will bring you to the point of destinations within 3 hours. Bordeaux is known for its moderate climate. The temperature here fluctuates between 10 and 25 degrees by Celsius in summer and winter. Such mild climate is a perfect condition for many plants that grow here. Actually, the nature of this place will definitely conquer you and make you want to return to Bordeaux again and again.
Excursion over cultural sights of Bordeaux - 'must visit' points of interest
Start your acquaintance with the sights of the city from visiting Esplanade des Quinconces Square, which is also known as the largest square in Europe. Until 1827 the square was located on …

Open
Bordeaux is a port city. In the 3rd century it was so important that was even called “Little Rome”. In true, the city was a smaller copy of the Roman Empire capital. However, in the 18th century architects managed to change the look if the city and called it “Little Paris”.
The majority of buildings in Bordeaux are protected by UNESCO as valuable objects of great cultural and historical importance.

The museums of the city are truly amazing and full of luxury and originality. Here you will be able to touch the long history of this place. In Bordeaux there is a large number of historical values and places of interest. Moreover, Bordeaux is a large tourist center for a long time and the city is annually visited by thousands of tourists. Copyright www.orangesmile.com
Your active city break in Bordeaux. Attractions, recreation and entertainment - best places to spend your day and night here
Your rest in Bordeaux will bring you lots of unforgettable memories. Tourists are welcome to mix walks to historical places and sightseeing with visits to various entertainment centers, …

Open
The starting point for many excursions is the Exchange Square, next to it are concentrated several gorgeous baroque buildings that were built in the 18th century. The main decoration of the square is the building of the Exchange Palace, furthermore there is the Customs Museum. Recently, the main monument of the historic square is the Mirrors fountain. This unusual fountain is a large flat surface which has been filled with water. Through special nozzles water is sprayed out of the fountain, so the square is always hovered in a slight haze. 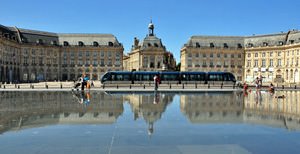 Fans of theatre art will be able to visit the Grand Theatre; it is the main theatre scene of the city since the 18th century. This theatre occupies an incredibly beautiful building with columns; fragments of an ancient Roman temple were discovered during the construction in its place.
Advices to travellers: what you should know while being in Bordeaux
1. A large part of the local malls and shops open around 10:00 and work until 18:00 - 20:00. Some shops close for a small lunch break. Saturday is usually considered a short working day, …

Open
Among the outstanding religious sites in Bordeaux, of particular interest is Cathédrale Sen Andre. The first temple in its place was built in the 9th century, and the Cathedral, which visitors can see today, was built in the 11th century. Despite the fact that during hundreds of years of existence of the cathedral was reconstructed several times, it has retained its unique Gothic features. Inside the cathedral are preserved many of the old elements of the building, and its visitors will have the opportunity to admire the artful stained glass windows and stucco on the walls.

Attention should be paid to the Baroque church of Notre-Dame too, which was built in the early 18th century. It may take a while to admire the façade of the church, it is decorated with elegant bas-reliefs and sculptures. This ancient church also managed to preserve its old finish, inside it is decorated with artful mural of 18th – 19th centuries.
Extraordinary weekend in Bordeaux - unusual places, services and attractions for travel gourmet
Do you associate Bordeaux only with historical monuments and French restaurants? It's time to take a look at this wonderful French town in another way. On weekdays, the central Quinconce …

Open
Each year the number of amazing sights in Bordeaux increases, 2016 the original museum called "Wine City" was opened. It occupies an incredibly beautiful modern building; this museum is dedicated to the history of wine-making region. During the tour, visitors will be able to find out what type of wine is produced in local factories, and the museum often holds tastings and interesting thematic events. The museum has a shop where you can buy interesting national wines. The unique building of the museum is now one of the most photographed sites in the city.

This guide to iconic landmarks and sights of Bordeaux is protected by the copyright law. You can re-publish this content with mandatory attribution: direct and active hyperlink to www.orangesmile.com.
Bordeaux - guide chapters 1 2 3 4 5 6 7 8 9 10 11 12 13 14 15

Shopping streets in Bordeaux
♥   Shopping area ' Rue Sainte-Catherine' Bordeaux, 0.7 km from the center. On the map

Survived castles around Bordeaux
♥   Castle 'Château de Blanquefort' Gironde, 9.1 km from the center. On the map

National and city parks around Bordeaux
♥   Regional Nature Park 'Landes de Gascogne' , 42.8 km from the center. On the map

Art galleries in Bordeaux and around
♥   Art museum 'Musée des Beaux-Arts de Bordeaux' Bordeaux, 1.2 km from the center. On the map

Sights around Bordeaux from our guide 'Extreme places on Earth' 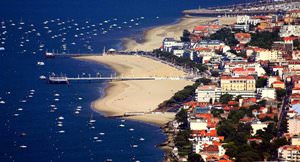 Distance from Bordeaux center - 51.1 km.
The unique beach is one of the largest in Europe. In the central part of the coast reaches its width 300 meters. The travelers who want to bring variety into the recreation through the hikes in the interesting places can visit the largest dune of Europe, whose height is 118 meters. In the evening most tourists go to the restaurants next to the coast and the beach is really quiet. … Read further 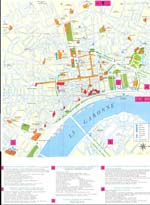 Search touristic sites on the map of Bordeaux

Sightseeing in regions nearby Bordeaux

Aquitaine Region
Bird Island is a must see place for nature enthusiasts. It's a beautiful wildlife sanctuary protected by government. This scenic island houses dozens of bird species including rare ones. Despite of the reserve status, numerous wooden cabins for guests were built on the island shore. Famous oyster farms are also located there; they are very popular among the tourists. These ... Open »
La Rochelle
One of the main places of interest of La Rochelle is the Old Port in the center of the city. The port looks like a haven surrounded by the Old City. In the XIV century the port got two large towers built for protective purposes. These are La-Chaîne on west and Saint-Nicolas on east. When La Rochelle was in danger, between these towers were stretched chains that closed the ... Open »
Biarritz
Let’s talk about sights of this town. There are many places of interest in Biarritz. For example, museums – in the Museum of History you will find large number of items from the Emperor collection. The Marine Museum features large collection telling about the development of the underwater life in this region. Another popular sight among tourists is an Orthodox Christian ... Open »
Limoges
Nowadays only ruins remind of those facilities. They are precious to the local people as they sure have historical value. One more ancient and precious destination of the city is the library of Saint Martin. The library contains 23 thousand of books. The library works in the abbey and today this is a museum and a center of art. The main sight of this place is the tomb of the ... Open »
Lourdes
In the immediate vicinity of the healing springs, medical centers were established, in terms of the number of which Lourdes is one of the country's confident leaders. The city would be a great destination not only for those interested in religious sites and wishing to find miraculous healing. Being located in a wonderfully beautiful natural area, it is extremely popular among ... Open »
San Sebastian
Among the main attractions of the city are the aquarium with a glass tunnel, from which you can see amazing marine life, the Museum of Oceanography, San Telmo museum with a collection of frescoes of the Catalan artist Josep Maria Sert, and two most beautiful bridges built across the Kursaal and Maria Cristina rivers. San Sebastian is a city of festivals. The famous ... Open »

All about Bordeaux, France - sightseeings, attractions, touristic spots, architecture, history, culture and cuisine. Prepare your trip together with OrangeSmile.com - find out the 'must see' things in Bordeaux, which places to visit, which excursions to take, where the breathtaking views are waiting for you. Planning your trip with this travel guide will help your to get the most out of Bordeaux in few days.