Sightseeing in Grenoble - what to see. Complete travel guide 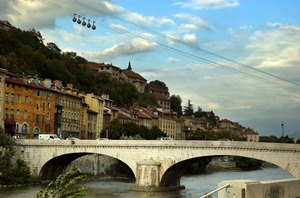 Grenoble is an ancient town which history started around two thousand years ago. This is the main city of Dauphiné historic region and the administrative center of Isere department. The population of Grenoble estimates 151 thousand of people and around 400 thousand of people together with suburbs. Grenoble steadily developed from a small settlement named Cularo into an amazing city with rich cultural and historical heritage. Here are developed such industries as chemical and paper, machinery building and light industry. There is also a center of nuclear research in Grenoble.
Top touristic routes around Grenoble: architectural sightseeing and landmarks
Discovering the architecture of Grenoble from bird's eye view! Cathedrale Notre-Dame, Fort de la Bastille, Musee Dauphinois, Stade des Alpes, Cathedrale Saint-Andre, Palais des Sports, all those monuments are defining the image of Grenoble …

Open
Grenoble traditionally amazes its visitors with the contrast of architectural buildings and mountains that grandiosely tower above the city. In Grenoble you can visit twelve museums that offer exhibitions devoted to traditional and modern art, modern, archeology, ethnology, science and electronics, antique goods and so on. The main sights of the city are San Loran Crypt, Notre Dame Cathedral, the museum of Stendhal, the Museum of Fine Arts and the Center of Winter Sports. During your walk on cozy streets of Grenoble you can find multiple antique shops and souvenir outlets.
The city has many interesting museums. One of the most visited remains the Archaeological Museum. For more than a hundred years in the vicinity of the city, several large archaeological areas have been developed. During this time, researchers have discovered many unique artifacts, which are represented in this museum. Anyone can visit this cultural center as the entrance to it is free. Copyright www.orangesmile.com
Cuisine of Grenoble for gourmet with top restaurants and cafe
Fans of culinary delights will be definitely pleased with restaurants of Grenoble. The city is home to a large number of luxurious dining facilities that offer their guests a wide range of …

Open
For connoisseurs of art of past centuries, it will be interesting to visit the Museum of Grenoble, which presents priceless masterpieces by Matisse, Canaletto, Picasso, Rubens and other world-famous painters. In addition to beautiful paintings in this museum, a very interesting collection of artifacts devoted to the history and culture of Ancient Egypt is collected. 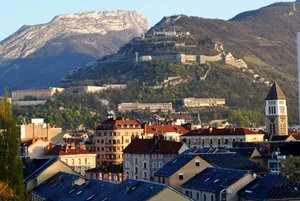 In the vicinity of the city lies the legendary Fort Bastille. The path to this ancient fort itself will be an unforgettable adventure. It is located on the top of a hill where tourists are picked up by a funicular. From its transparent cockpit, there is a splendid view of the city. At the top of the hill you can admire the ancient fortifications built of a huge stone, and also visit several excellent viewing platforms.
Authentic traditions, festivals and lifestyle of Grenoble inhabitants
Grenoble is known firstly as a student city, secondly as a place where a scientific site with a nuclear reactor is located, and thirdly as the hometown of Stendhal, and, of course, as the …

Open
An interesting landmark is the ancient St. Roch Cemetery, which was founded and consecrated in the early 19th century. Many outstanding cultural figures and political leaders are buried in this cemetery. The place where the cemetery is located is very symbolic; in the 15th century the first chapel was built here. By the beginning of the 19th century, it was almost completely destroyed. In its place, a new luxurious chapel of St. Roch which can be admired now was built. 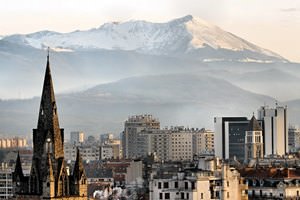 One of the favorite entertainments for tourists is walks on the La Mure Railway, which runs on the railway of the same name. The train goes through incredibly beautiful places and overcomes 18 tunnels. While walking, the chic panoramic views of the Drac River and the dam can be admired. In 2010, the railway was damaged by a strong landslide. However, in a few years it was restored.
Excursion over cultural sights of Grenoble - 'must visit' points of interest
Grenoble cherishes the legacy of past centuries. The territory of the city is home to a huge amount of historical and architectural monuments. You will find Premol Tower not far away from …

Open
Vacationers with children should definitely look into the Museum of Natural History. It is famous for its rich collection of minerals worldwide. Also, in this museum are exhibits that introduce visitors to the rich world of alpine nature. Small visitors will like the aquarium located in the museum.

This guide to iconic landmarks and sights of Grenoble is protected by the copyright law. You can re-publish this content with mandatory attribution: direct and active hyperlink to www.orangesmile.com.
Grenoble - guide chapters 1 2 3 4 5 6 7 8 9 10 11 12 13

♥   Shopping area ' Place Grenette' Grenoble, 2.8 km from the center. On the map

♥   Shopping area ' Grande Rue' Grenoble, 3 km from the center. On the map

Survived castles around Grenoble
♥   Castle 'Château de Clermont' Isère, 28.2 km from the center. On the map

National and city parks around Grenoble
♥   Regional Nature Park 'Chartreuse' , 20.9 km from the center. On the map

♥   Regional Nature Park 'Baronnies provençales' , 90.9 km from the center. On the map

Art galleries in Grenoble and around
♥   Art museum 'Museum of Grenoble' Grenoble, 3.4 km from the center. On the map

Sights around Grenoble from our guide 'Extreme places on Earth' 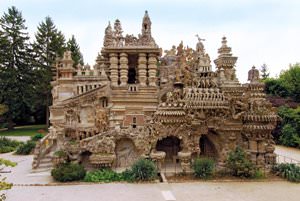 Distance from Grenoble center - 54.7 km.
After completion of the palace building, Cheval organized the excursions. He spent most of the money earned on building the mausoleum. Later it became the crypt of the humble Briefträger, which became known world-wide thanks to its strange and bold dream. Although the palace looks very brittle from the outside, it can be used as a residence. Its interior is made of stone and small shells. In some rooms, even the whimsical chandeliers were preserved from small shells made by the palace owner. … Read further 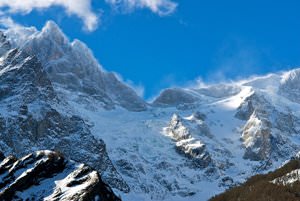 Distance from Grenoble center - 48 km.
The entertainment infrastructure of the resort is not so well developed. In La Grave, there are no nightclubs or restaurants open until the late night. The local conditions for the sports entertainment are simply excellent. La Grave will please the mountaineers and even the divers who can enjoy the ice diving on Lake Besson. The health resort is also interesting from a historical point of view. Some of its alleyways have retained the unchanging appearance for several years. … Read further 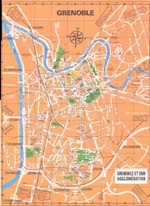 Search touristic sites on the map of Grenoble

Sightseeing in regions nearby Grenoble

Rhone-Alpes
The most attractive resorts of the province are located on the shores of Lake Geneva; there you can find cozy hostels and luxury hotels offering a wide range of services. Local beaches attract fans of relaxing vacations. Mont Blanc (the highest point of Europe) always attracts desperate climbers. Cozy parks of Lyon welcome romantic natures. In any case, there are lots of ... Open »
Alpe d Huez
Besides sports entertainment, vacationers can easily find other interesting activities that are particularly exciting for everyone wishing to learn more about the culture and heritage of the region. Dog sledding is one of these unforgettable experiences – dogs will pull your sled on a special trail. It is also possible to admire the beauty of winter landscapes during a snow ... Open »
Chambery
Just like any city in France, Chambery has the usual "set" of museums. Here you will find a house-museum of famous Rousseau, as well as such museums as Musee des Beaux Arts (Fine Arts) and Musee Savoisien (Museum of Savoy).The latter offers the exposition devoted to household objects and primitive paintings that are typical for the medieval Savoy. Tourists may also find much ... Open »
Meribel
Besides saturated sports program the resort offers a wide range of cultural activities. As sports competitions take place here almost every day, visitors can see professional skiers. Various plays and concerts featuring local bands are also not rare here, so you will be surely able to attend them during your stay. If you are tired of walks on snow-covered peaks and want some ... Open »
Albertville
Albertville offers wide range of resting activities for all categories of tourists. Shopping fans must visit the center of Albertville, where the most famous shopping streets are. Zara, Boucheron, Garrard, and Binatone trading centers are usually the most popular among visitors. If you seek historical sights, take a walk in a piedmont region, where you can see old streets and ... Open »
Courchevel
All holiday activities in Courchevel are conducted with taking into consideration the culture of various countries of the world. If you visit this place during winter, we advise visiting “Golden Female of the Year” nomination, gala-concert on ice, magical Art of Pyrotechnics Festival, and brave Ski Show. You can also visit a Carnival and noisy parties in nightclubs and ... Open »

All about Grenoble, France - sightseeings, attractions, touristic spots, architecture, history, culture and cuisine. Prepare your trip together with OrangeSmile.com - find out the 'must see' things in Grenoble, which places to visit, which excursions to take, where the breathtaking views are waiting for you. Planning your trip with this travel guide will help your to get the most out of Grenoble in few days.