Sightseeing in Bayeux - what to see. Complete travel guide 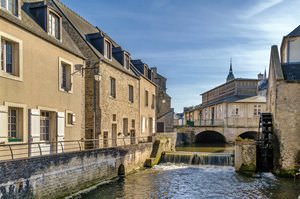 The French town of Bayeux is situated in the Normandy region not far from the sea. There are several reasons to visit this settlement. First of all, Bayeux is located close to major tourist routes, so it is a typical stop for everyone wishing to explore Calvados. Second, the town is not far from the sea, so it is a great place to relax at the seaside every day and enjoy a tranquil and peaceful atmosphere at the same time. Third, Bayeux is rich in cultural and historical landmarks. Finally, it would be a mistake not to mention the inimitable charm of this French town.
During the prehistoric times, Bayeux was the central part of the Baiocasses’ territory. Later, Romans occupied this land. This marked the start of a prosperity period for the town. Bayeux got a water pipe system and a gymnasium. Old historical records prove that this was an actively developing town. The first episcopacy appeared in the region in the 4th century. At that time, the town and surrounding areas were a part of the Saxon Shore. Charlemagne used the territory near Bayeux as an exile for Saxons who he managed to defeat during bloody battles.
In the 9th century, Bayeux becomes the property of Normandy Count Rollo. He conquered this land from Count Berengar who was later killed by Vikings. After that, Bayeux became the central settlement for the new rules of Normandy. Local people maintained their Scandinavian customs and traditions for many years. In the middle of the 14th century, during a war with England, Bayeux fell under the authority of the British twice. However, thanks to the efforts of Jean de Dunois in 1450, the region returned to its original owners. Copyright www.orangesmile.com
The French town of Bayeux is still famous thanks to the invasion of Normans under the rule of legendary William the Conqueror in 1066. The military leader managed to take over England. The second event, which made the town famous, took place in 1944. Bayeux was the first city of the Battle of Normandy. It became the first settlement liberated from the fascist plague of the 20th century. Much to the happiness and excitement of local people, the town didn’t suffer much damage during the tough and bloody battles. Thanks to this, there are still medieval landmarks and attractions in Bayeux. 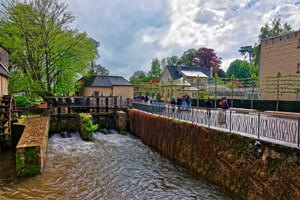 What attractions can Bayeux offer to its guests? The Bayeux Cathedral or Notre-Dame de Bayeux is the major and most important landmark in the town. The building works started in the 11th century and lasted almost four years. The building draws attention because of its gorgeous architecture and exceptional elegance. The cathedral is a gorgeous mix of gothic and Romanesque styles.
The 16th century, which brought the appearance of Huguenots in the region, made a significant impact on the look of the cathedral. The church lost most of its treasures – everything was stolen or destroyed. Despite this, the cathedral still has a beautiful ceiling and stunning arched apertures with tall columns. 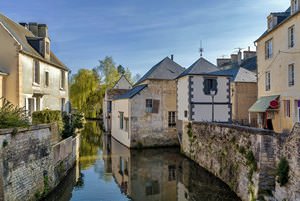 The Bayeux Tapestry is one more iconic attraction of the French town. This is a skillfully made embroidered cloth created in the Middle Ages. The cloth is nearly 70 meters long and almost 50 centimeters tall. The embroidered pictures tell us the history of an old war between Normans and English. You will see the story of Harold II starting from his departure and until the end of his life during the Battle of Hastings.
Unfortunately, the final part of the tapestry is lost. It depicted the triumphal crowning of Wilhelm the Conqueror. In 2012, a group of scientists started a difficult task of restoring the last six meters of the tapestry that were destroyed with time. Thanks to their efforts, guests of the town can now see the complete story told by this fantastic piece of art. Initially, the tapestry was stored in the cathedral, but it was decided to transfer it to the museum in order to ensure its safety. 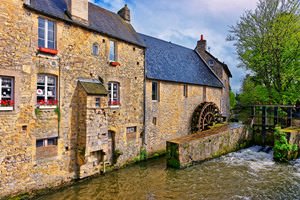 If you visit Bayeux at the beginning of summer, you can attend an annual festival dedicated to the Battle of Normandy and soldiers who freed the town from Nazis. Residents and guests of the town come to see a spectacular air show and the restored battle. The festival always includes short battle scenes and military-inspired games. In the evening, visitors are welcome to join a large picnic at the beach and enjoy marvelous fireworks.
In order to get to the fabulous French town of Bayeux, you need to take a train that departs from the Saint-Lazare train station in the capital of the country. You will need to make a change in Caen. It takes approximately three hours to reach Caen from Paris. After that, only a twenty-minute-long ride separates you from Bayeux. Besides this, it is possible to reach Caen by ferry that departs from the British port city of Portsmouth.
This guide to iconic landmarks and sights of Bayeux is protected by the copyright law. You can re-publish this content with mandatory attribution: direct and active hyperlink to www.orangesmile.com.

Survived castles around Bayeux
♥   Castle 'Château de Olivet' Calvados, 0.7 km from the center. On the map

♥   Castle 'Château de Colombières' Calvados, 20 km from the center. On the map

♥   Regional Nature Park 'Normandie-Maine' , 89 km from the center. On the map

Tourists with children are recommended to visit Paris Disneyland. This is a large entertainment complex, which territory is divided into several themed zones. Thrilling rides, characters from favourite fairy tales and cartoons, movie theatres, shops and cafes await visitors in every park zone. It is also possible to see main places of interest in France during a cruise on Seine. … Open

Search touristic sites on the map of Bayeux

Sightseeing in regions nearby Bayeux

Caen
Under the patronage of Dukes of Normandy, Caen became the capital of the region. The city was growing fast at that time, and new abbeys appeared in it. Later, it was discovered that there are large deposits of limestone not far from Caen. Also known as Caen stone, the limestone mined in this region is homogenous and has a unique cream color. This material is used in many ... Open »
Normandy
City of Cherbourg with its medieval charm is an excellent change from war theme. Beautiful building are found literally everywhere at Cherbourg; many of them are occupied by hotels, shops or restaurants. Sea Museum and busy Centrale square are must see places there. The theater is located next to the square; local small shops offer charming umbrellas, the most popular souvenirs ... Open »
Deauville
When the resort got its first infrastructure, the Duke of Morny did all he could to make Deauville a more prestigious resort. As the duke was a successful businessman and knew how to make money, his fortune soon increased due to successful speculative real estate sales. The French also know Deauville as the second town where Coco Chanel opened her boutique after the legendary ... Open »
Le Havre
There are only few churches that survived up to our times. Among them are Notre Dame Church, and Church of St. Josef – built in XX century it traditionally amazes visitors by a combination of neo gothic style and functional architecture. You can also visit the museum of Old Havre, Museum of Natural History, Marine Museum, and Musée des Beaux-Arts André Malraux. ... Open »
Honfleur
Pirates captured Honfleur in the 15th century. They thought that the city was the best place for their naval base. However, they were not able to keep their positions for a long time, and soon the sea rogues were expelled from this region. Honfleur started trading with American colonies in the 17th century, and the city and its people greatly benefited from it. The French ... Open »
Provence - Cote d'Azur
The old town of Saint-Paul-de-Vence is amazing; several medieval buildings have survived on its territory. Saint-Jean-Cap-Ferrat is famous for its natural attractions; it will appeal to fans of hiking and cycling. Marineland amusement park with the museum of the sea and a large aquarium will be interesting to travelers with children; every day there are exciting dolphin shows ... Open »

All about Bayeux, France - sightseeings, attractions, touristic spots, architecture, history, culture and cuisine. Prepare your trip together with OrangeSmile.com - find out the 'must see' things in Bayeux, which places to visit, which excursions to take, where the breathtaking views are waiting for you. Planning your trip with this travel guide will help your to get the most out of Bayeux in few days.