Sightseeing in Besancon - what to see. Complete travel guide 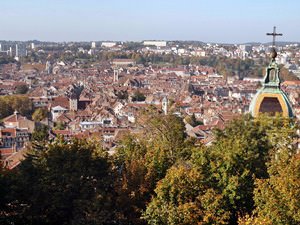 Ancient city Besancon is considered the historical capital of the Franche-Comté region. This is the motherland of such outstanding scientists and people of art as Lumiere brothers, Victor Hugo, Jean Baptiste Fourier and Proudhon. Here appeared first manufacturers of watches in France and Besancon was also the first Italian city that started making artificial silk.
Family holidays with kids in Besancon. How to entertain your child, things to show to children.
Besancon will be interesting to visit for those who during leisure, like to combine walks in picturesque places, active entertainment and acquaintance with cultural attractions. For young …

Open
The city is generously decorated with magnificent buildings. It has managed to retain its historical and architectural sights that amaze visitors by their grace and uniqueness for many centuries.

Pointe-Noire is known as the main sight of Besancon. It was built by the Romans yet in the II century AD. One more magnificent building of XVIII century is Saint-Jean Cathedral. However, if it usually takes a couple of hours to view these sights, in order to study the local citadel you will need to spend several days. The citadel is occupied by several exhibition centers. There you can find first watches made here several centuries ago and modern masterpieces in this area. The Museum of Hugo will provide you with information concerning the biography and works of this famous French writer. You can also visit the Museum of Natural History, Town Hall, the Museum of Fine Arts, Pale-Granville castle, and see huge Astronomic clocks that cannot be found anywhere else in the world.
One more nice surprise waits for those who have sweet tooth. There is a small town named Pontarlier not far from Besancon. This town is famous for its large chocolate factory, one of best in France. All tourists can attend an excursion to this factory and try the sweets and chocolate made by the local confectioners. Copyright www.orangesmile.com
Cuisine of Besancon for gourmet with top restaurants and cafe
Besancon will pleasantly surprise culinary experts with a choice of restaurants, bars, and cafes. It is easy to find dining venues specializing in different cuisines of the world in the …

Open
Amongst many religious sites, noteworthy is the Abbey of St. Paul. It was founded in the 7th century, only the ruins of some buildings have survived to this day. The best preserved is the ancient church of St. Paul, the facade of which remains untouched since the 14th century. It is a vivid example of the Gothic style, this church has preserved perfect old design and many interesting artefacts. Several years ago, a museum was opened within the church, which today is regarded as the cultural object of state’s significance. 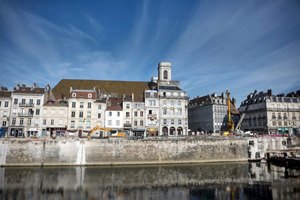 In the city there are numerous beautiful ancient palaces, one of the most interesting is considered Granvel Palace. It was built in the 16th century and is typical of the architectural monument of the Renaissance, for hundreds of years the palace remained virtually unchanged. This architectural monument has rich and interesting history, during the years of its existence at various points it housed Academy, Theatre and Museum of History, and now a rich exhibition of the Museum of time is there. One of the main features of the palace is a charming patio; in the warmer months, theatrical performances and concerts are often performed there.
Authentic traditions, festivals and lifestyle of Besancon inhabitants
Besancon is the capital of the department of Doubs and the Franche-Comte region. Even though it is not in the list of top destinations in France, the city is one of the most beautiful places …

Open
The complex of incredibly beautiful historic buildings is taken by Besançon casino, it is actually a gorgeous entertainment multiplex. Even in the late 19th century there was a spa complex, sophisticated hotel and casino, only the wealthiest locals and visitors of the city could afford to rest here. Today in this historic complex located in the best thalassotherapy centre, there is still an expensive hotel, and even a national cuisine restaurant. Spending time here will be interesting not only for fans of gambling; on the territory of the entertainment complex is a field for the game of golf, as well as excellent conditions for events. 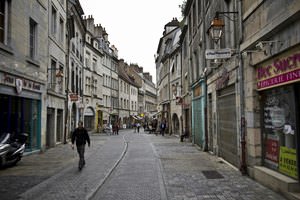 Fans of theatre art should visit the municipal theatre of Besancon, its opening was held back in 1778. Until the second half of the 20th century, this historic theatre has existed virtually unchanged, but in 1958 there was a large fire in it. The fire completely destroyed the main hall of the theatre, which later was fully restored. Today, this theatre hosts the most important cultural events, and it preserves an atmosphere of past.

This guide to iconic landmarks and sights of Besancon is protected by the copyright law. You can re-publish this content with mandatory attribution: direct and active hyperlink to www.orangesmile.com.
Besancon - guide chapters 1 2 3 4 5 6 7 8 9 10 11

Survived castles around Besancon
♥   Castle 'Château de Montfaucon' Doubs, 3.4 km from the center. On the map

National and city parks around Besancon
♥   Regional Nature Park 'Haut-Jura' , 97.4 km from the center. On the map

Sights around Besancon from our guide 'Extreme places on Earth' 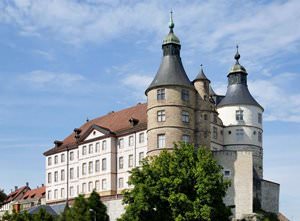 Distance from Besancon center - 64.4 km.
Despite the difficult revolutionary period for the fortress, many things that belonged to the first owners were preserved in it. Beautiful antique furniture deserves special attention. It was installed in the halls even during the period of ownership of Monbeliard. The atmosphere of previous years was also restored in the castle kitchen. A collection of paintings by famous French painters is kept in the castle. It is often used for temporary exhibitions today. The castle is open to the public several days a month. Especially many guests come here on the days of various cultural events. … Read further 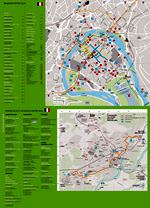 Search touristic sites on the map of Besancon

Sightseeing in regions nearby Besancon

Neuchatel
The old part of the town was built in the 16th century. However, the unique homes made of yellow limestone according to the best traditions of the Middle Age architecture are carefully saved till our days. Neuchatel Castle is the symbol of the city. Its west wing was built in the 12th century, and the remaining part of the castle was built during the 15th - 17th centuries. All ... Open »
Dijon
This town is located on the bank of the Ouche River. Dijon is a famous cultural region that is often called the center of a magnificent architecture and art. To prove these words we can mention numerous architectural places of interest, sculptures, and museums that do not stop amazing travellers by their unforgettable design and luxury. The historical part of Dijon is called ... Open »
Beaune
Once the capital city in Burgundy, Beaune is an incredibly popular destination in France. The town attracts many tourists every year. This part of the country is well-known for its winemaking traditions – more than ten different varieties of wine are produced in Burgundy. They differ in taste and scent. Hospitable local people are always glad to see new guests. Numerous cafes ... Open »
Bern
Bern is a capital of Switzerland. This is a relatively small city that is full of wonderful and unforgettable places. Originally the name of the city came from the word “bear” and in past times there has been a tradition to keep at least one bear in Bern. When starting our talk about this city, we simply must mention that the most famous and one of most visited sights of ... Open »
Montreux
The Swiss town Montreux has captured the hearts of thousands of tourists long ago. The magnificent views of snow-covered mountain peaks, beautiful lakes, and endless vineyards - this amazing variety of natural landscapes cannot leave visitors indifferent. Only a few decades ago this place was a small settlement founded on the shore of the Geneva Lake. First tourists appeared ... Open »
Geneva
With the beginning of the XIII century the appearance of the cathedral has undergone many changes. Both of its unfinished main towers date back to the thirteenth century. The former portal of the facade was replaced with the portico with six Corinthian columns in 1749 - 1756. The pointed metal tower of the cathedral dates back to 1895. It appeared on the site of the former ... Open »

All about Besancon, France - sightseeings, attractions, touristic spots, architecture, history, culture and cuisine. Prepare your trip together with OrangeSmile.com - find out the 'must see' things in Besancon, which places to visit, which excursions to take, where the breathtaking views are waiting for you. Planning your trip with this travel guide will help your to get the most out of Besancon in few days.