Active vacation in France - things to do, entertainment and nightlife 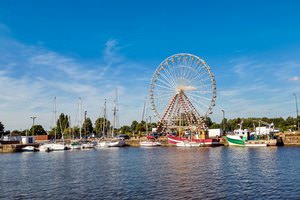 France is incredibly popular with tourists not only because of its rich cultural history, but also picturesque landscapes, the possibility of free movement, the French Alps and numerous beach resorts attract travelers no less. Numerous routes for trekking and cycling routes have been laid across the country. Cycling is incredibly in demand. Not without reason, in France is the most famous cycling race in the world - the Tour de France. Off the coast of the Mediterranean Sea and the Atlantic Ocean, you can dive, surf, kite and do other water activities. Mountain Alpine peaks are the centers for mountaineering and alpine skiing.
The soul of France - religions and languages
The official language in France is French. This clause is even included in the Constitution of the Country. It should be noted that the Constitution …
Read further
Cycling and trekking are very popular types of recreation in France. Numerous trails are laid across the country most of which pass through historical and wine regions. It will be exciting to go on a bike tour or a hiking tour through the wine cellars of Bordeaux. The trip will be accompanied by a visit to the local winemaking chateaux and magnificent views. In the valley of the river Loire, there are more than 70 castles. A walk in this region will give unforgettable impressions and a lot of emotions. Another popular destination is the beaches of the Atlantic and an introduction to Corsica. You can also take a bike trip through Languedoc, to the coast of the Mediterranean Sea. You can make a tour yourself or use the services of tour operators.
A walk through the regional park of the volcanoes of Auvergne would be fascinating. This trip is suitable for those who like climbing and trails with obstacles. In addition to the unique nature, for travelers there are excursions and visits to local attractions. In the French Pyrenees, the Spanish arch bridge is lost over the precipice. The place is also incredibly popular for fans of trekking. From the bridge there is a fascinating view of the waterfalls, which can also be climbed. The area is equipped with a lift for the convenience of travelers. Not far from the city of Calvi on top is the chapel of Notre Dame de la Serra. It is believed that if you go up to it with your loved one, climbing will bring happiness to a lifetime. Copyright www.orangesmile.com
France economy - strengths, wealth and problems
France today, is one of the most developed countries in the world in terms of GDP. These indicators are stable, despite the fact that a fairly large …
Read further
Fans of rafting and extreme descents on the rivers, like it in the Tarn Gorge in the mountains of Koss. At the bottom of the canyon, there is a meandering and turbulent river Tarn, which has become one of the centers of rafting in the whole country. On it you can make a canoe or kayak descent. Along the river there are pedestrian routes for fans of trekking. On the banks of the river there are several ancient villages where you can relax and taste the local wine. Another popular gorge among tourists is the Ardeche gorge, located along the river of the same name. An uneasy river has pronounced curves, which makes it attractive to rafting enthusiasts. Also, on the banks of the river, you can fish, having previously purchased a license. 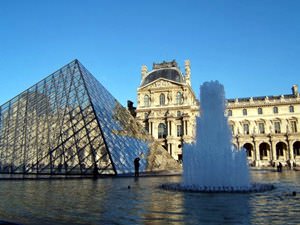 The most famous and expensive ski resort in France is Courchevel, consisting of 5 small towns. Courchevel 1850 is expensive. It is here the world's elite gathers. The rest of the places offer rather democratic prices to their guests. Courchevel is famous for its developed infrastructure and excellent opportunities for recreation and entertainment. Another major ski resort of the country - Meribel, is considered one of the most beautiful places in the Alps. The building in the city is completely wooden. It has preserved its unique historical appearance. In addition to the trails, the city has cinemas, restaurants and shops, which will provide a rich "after-sleep" program.
Unique sights of France from our series 'Extreme places on Earth'
These spots really worth the attention of a real traveler-researcher. …
Read further
The ideal place for diving is Corsica. On this island is located the largest diving center in the country. Experienced divers can sink to the depth of more than 30 meters off the coast of Sanguinet. For those who are just beginning, less complicated dives are offered. Also you can dive all over the Côte d'Azur but it's better to surf on the Atlantic coast. One of the most popular places for surfers are the beaches of Biarritz in the Northern Basque Country, the place is best suited for beginners. Professionals will be interested in spots in the Landes and the Gironde. 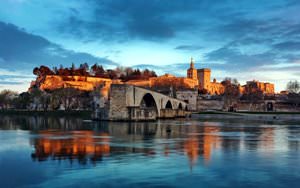 The city of Avignon is famous all over the world for its amazing historical sights. The entire area of its historic district is declared a UNESCO World Heritage Site today. Historical monuments of various periods have been preserved here. The Cathedral of Notre-Dame des Doms d'Avignon is considered the most famous among them. It was built in the 12th century. It has preserved many original elements of architecture. The main symbol of the religious monument is the gilded statue of the Virgin Mary. It is installed on its western tower. The cathedral is built in the Gothic style. An important pilgrimage site is located in it. This is the mausoleum of Pope John XXII.

Palace of the Popes is an equally remarkable architectural monument. Its construction began in 1316. It lasted for more than … Read all 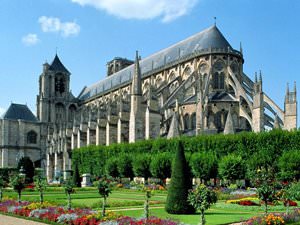 Saint-Étienne Cathedral is also known to many travelers as Bourges Cathedral. Its construction began in the late 12th century. The magnificent Gothic cathedral was consecrated in 1324. The official opening of the cathedral took place in the first half of the 14th century. But construction work continued continuously in it until the 16th century. The main feature of the Gothic cathedral is its unique architecture today. The most beautiful medieval sculptures are preserved here. There are also beautiful stained glass windows here. Connoisseurs of medieval art from all over the world come to admire them.

Visitors to the cathedral can see the unique stained glass windows today. They were created in the first half of the 14th century. Initially, there were 25 of them. But 22 stained glass … Read all
All unique sightseeing France

Entertainment, recreation and attractions in cities of France

Paris
Most curious travelers will be interested in visiting the park called Futuroscope. During an excursion guests of the park can learn everything about the achievements in the field of visual technologies and watch movies that look completely different on the screens of Futuroscope. When it comes to night entertainments of Paris, we simply cannot fail to mention Moulin Rouge, as well as numerous nightclubs. Fans of electronic music will surely like club Rex, which is distinguished by its superb … Read more

Aix-en-Provence
Parc Jourdan is smaller but it still has many interesting plants and charming recreation areas. There are always many flowers and decorative plants here, and comfortable benches everywhere are great for taking a seat and enjoying the view. The gorgeous Parc Saint Mitre is also worth a mention. Not only landscaped decorations but also manmade water reservoirs and fountains decorate its territory. This park is a historic one – there are several old buildings here. Comfortable playgrounds for … Read more

Arles
You will have an opportunity to watch horses and dozens of different bird species. Local lakes are a popular nesting site. Lucky visitors will be able to see pink flamingoes. Numerous walking and cycling paths make it more comfortable to explore the reserve. Pastures occupy a significant part of the restricted area. Local farmers are allowed to graze cattle here. By the way, nearby equestrian centers provide horse riding lessons and exciting horse excursions in the reserve. If you like … Read more

Annecy
The city center is very green because of numerous trees and ornamental plants. Besides that, there are several cozy parks in Annecy. Jardins de l’Europe, is usually recognized as the most picturesque public park in the city. It is located near the lake. Initially, there was a swampy area instead of the beautiful park that we can see today. It was decided to make an English garden here in the 19th century. For this purpose, more than 600 trees and thousands of different flowers were planted … Read more

Nice
Le Privilege nightclub resembles a tropical island. Its halls are decorated with the skins of animals and exotic plants. The institution is distinguished by rather relaxed and friendly atmosphere, so a couple will easily find here a silent place for rest. Bars of Nice are no less attractive and entertaining. In addition to gourmet snacks and beverages they often offer interesting cultural programs. As a rule, most popular bars are located in major hotels. Tourists, who plan to visit the city in … Read more

Cannes
Le Croisette Casino is a popular holiday destination among tourists. It takes just a couple of minutes to go to the internationally famous casino from the center of Cannes. The casino is frequently visited by fans of classic table games, roulette devotees, and visitors who above all enjoy modern slot machines. Fans of gambling will also like Carlton Casino Club, which is often visited by celebrities. This casino also features a large selection of table games. Carlton Casino Club is also … Read more

Lourdes
You should definitely visit the Parc Animalier De Pyrenees. There are almost no cages in this unique zoo. You can pet or even feed many animals here. Special food is sold for this purpose in the park. Of course, dangerous animals like bears or wolves are fenced off from visitors. However, you can easily get into the cage of gophers or flamingos, for example. There are many animals here. You can see beavers and deer that are familiar to the middle lane, as well as exotic ones like the red … Read more

Lyon
The most extensive and beautiful park is Parc de la Tete d'Or located next to the Art Gallery. After the tour, everyone can take a stroll along its winding paths, or relax in the shade of century-old trees, enjoying the silence. There are special areas for sports entertainment in the park, so you can go on holiday with your family. Nature lovers would like a charming garden of Le Jardin Des Chartreux. In the warmer months, it is decorated with large flower beds. The garden differs not only with … Read more