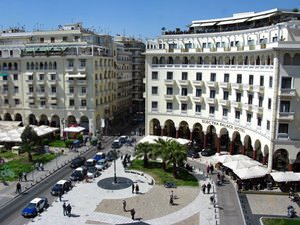 Thessaloniki holds annually various holidays and festivals. Original country holidays will be of great pleasure for eager dancing fans, gastronomy tourism enthusiasts and modern cinema art admirers. In the middle of December the resort is visited by latina dancing fans as the Salsa Cubana festival falls exactly within this period. The Afro Cuban Dancing festival is an all-comers’ dancing competition in which all the festival participants can take part.
Top touristic routes around Thessaloniki: architectural sightseeing and landmarks
Discovering the architecture of Thessaloniki from bird's eye view! Hagia Sophia, Arch of Galerius, Heptapyrgion, OTE Tower, all those monuments are defining the image of Thessaloniki …

Open
The guests of the festivals will enjoy various events and entertainments during the festival apart from the brightest performances and competitions of pro dancers. Engaging bright parties and discos, master classes by globally renowned dance coaches, special excursions and musical evenings will add to the pleasure of the festival guests. The greatest natianl dancing event will be of great pleasure for true dance and music fans.
The first dancing festival took place in Thessaloniki just a few years ago. Today the festival is a part of cultural life of the city and is a recommended event to visit for tourists wishing to get a deeper insight into the culture of the country. Annually the festival is visited by famous musicians and performers making the festival even more engaging and interesting. Thessaloniki is commonly referred to as the gastronomy capital of the country. The city hosts several excellent restaurants known far beyond the country boundaries. Copyright www.orangesmile.com
Cultural vacation in Thessaloniki - fantastic architecture and monuments
White Tower, Rotunda of Galerius, Zeitenlik, as well as many others, they all become the world's cultural heritage objects and remain as iconic monuments for Thessaloniki …

Open
A few years ago the resort was appointed as an established place for holding of the International Food Festival. The haute cuisine admirers should visit Thessaloniki in the beginning of November. The city turns into a huge restaurant complex for a few weeks. The International Thessaloniki Food Festival is attended by more than three hundreds of expert cooks from all over the country as well as famous culinary masters from other countries. The festival lasts for more than three weeks. Evenings most restaurants and cafes of the city hold various gastronomy events. 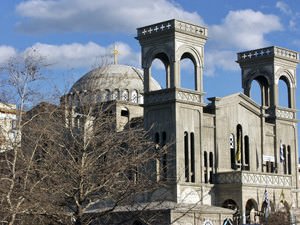 The guests of the festival can not only enjoy dainty festive treats by famous cooks but directly take part in the process of cooking of these marvelous culinary masterpieces. The youngest visitors of the Festival will also discover lots of exciting events. They will also have a chance to perform their cooking skills.
Guide to Thessaloniki sightseeing - things to see and to visit
This Greek resort is famous not only by its magnificent beaches, but also by rich historical heritage. The history of the city enumerates more than 23 centuries, and every era has added some …

Open
Another exciting ethnic holiday is the Dimitria Festival which was found in 1966. According to historical data the festival dates back to the epoch of the Byzantine Empire. The festival commemorates the city’s patron saint – the Saint Demetrius. The entertainment program of the festival includes various theatrical performances, festive parades and marches as well as different conferences.

This guide to traditions and festivals in Thessaloniki is protected by the copyright law. You can re-publish this content with mandatory attribution: direct and active hyperlink to www.orangesmile.com.
Thessaloniki - guide chapters 1 2 3 4 5 6 7 8

Cathedrals and basilicas near Thessaloniki
♥   Cathedral of the Immaculate Conception, Thessaloniki, 0.6 km from the center. On the map

♥   Castle 'Heptapyrgion' Thessaloniki, 1.6 km from the center. On the map

♥   Castle 'White Tower of Thessaloniki' Thessaloniki, 1.6 km from the center. On the map

Colors of Thessaloniki in photos

Traditions and festivals in cities around Thessaloniki

Thessalia Region
The Greeks are very proud of their fellow countrymen. In particular, if a celebrity is originally from the same town as they are, he or she will be treated like a family member. Therefore, be careful in statements in order not to hurt the patriotic feelings of the person you are talking to. For the Greeks a family is an integral part of life. Parents try to do ... Open »
Larisa
In recent years, Larissa is the permanent venue for the international short film festival Piontas Ethos. It is participated by young directors from many countries of the world. The popular movie festival usually takes place in early March. Apart from film screenings, art and photo exhibitions, master classes and meetings with prominent filmmakers are an indispensable part of ... Open »
Kavala
Actually, local people are so fond of holidays that there was a holiday for any notable event, such as harvesting of some vegetable or fruit. For example, tourists can participate in the Festival of Potato in September. At the event, visitors can try different dishes with potato and watch music and dancing performances. Everyone is welcome to join the fun and enjoy the ... Open »
Skiathos Island
Locals prefer to get the most of life. That is the reason why Skiathos is filled with relaxed atmosphere and you forget about all your working problems here. Greeks will never work hard and waste their energy to earn money. You won't meet workaholics on Skiathos. If a Greek gets a large sum of money, he will never bring the money to a bank. He will spend it on useless things ... Open »
Skopelos Island
All of the taverns are full of people after the working day. It is customed here to gather around the table with family and friends in a favourite tavern. People have a meal and drink local alcohol under folk music and traditional dances. However, locals love to cook, especially men, who even visit culinary clubs. Women have started to attend such classes only in recent ... Open »
Alonissos Island
Greeks are open and emotional people. They like to interrupt each other, raise voice, touch people and use a lot of hand movements. Some of the gestures have their own meaning in Greece. Tourists think that when locals nod, they agree with you, but that is not right. A Greek “yes” is tilting the head to either side and making a sideways motion while slightly closing the ... Open »

Cityguide on traditions, mentality and lifestyle of people in Thessaloniki. Learn the best periods to visit Thessaloniki to discover its soul - authentic festivals, events and celebrations. We will also reveal the interesting habits, attitude towards the world and to tourists in Thessaloniki.