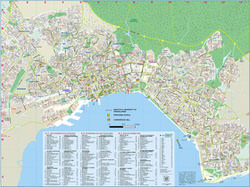 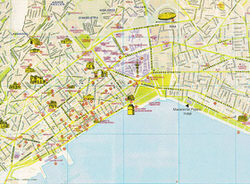 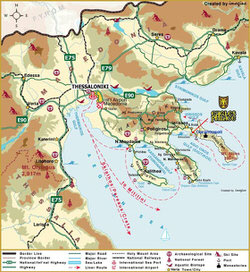 Interactive maps of hiking and biking routes around Thessaloniki

1. You can zoom in/out using your mouse wheel, as well as move the map of Thessaloniki with your mouse.
2. This interactive map presents two modes: 'Biking Routes' and 'Hiking Routes'. Use the '+' button on the map to switch between them.

This Thessaloniki map has two modes: 'Railway Network' and 'Landscape & Rural Map'. Use the '+' button on the map to navigate.

Our guide to Thessaloniki

5. Local shops and store serve customers from 9am till 9pm. During daytime some stores have a rather long lunch break. Many private shops and stores keep to individual working schedule which can be changed according to the season of the year. To buy some foods sparing tourists should visit one of the local markets as merchants welcome bargaining and easily reduce prices. 6. One of the main features of … Open

The Museum of Byzantine Culture will be a wonderful place for family holidays. Despite the fact that it was founded in 1913, the official opening of the museum was held only recently, in 1994. Nowadays, unique antique sculptures, ceramic products, ancient weapons, and ornaments are available to visitors. All of them date back to the reign of the Byzantine Empire. During world wars, the museum collection has already … Open

Traditions and mentality of Thessaloniki

The first dancing festival took place in Thessaloniki just a few years ago. Today the festival is a part of cultural life of the city and is a recommended event to visit for tourists wishing to get a deeper insight into the culture of the country. Annually the festival is visited by famous musicians and performers making the festival even more engaging and interesting. Thessaloniki is commonly referred to as the … Open

Thessaloniki is considered to be a youth resort as the city boasts a plenty of bright night clubs and dance floors, brand boutiques and upscale restaurants. The city offers an excellent aquatic park named the Waterland. The park takes a vast area and offers its visitors a huge choice of water slopes and rides, swimming pools and on water attractions. Sport leisure fans will love the water park as well as its … Open

The fist settlement on the territory of the modern city of Thessaloniki was established as far back as in prehistoric age. This fact is proven with archeological findings of current digs. The Archeological Museum of Thessaloniki offers its guests a priceless collection of showpieces aged several thousand years. The main showpieces of its collection are considered to be the wealth and jewels of Macedonian King … Open