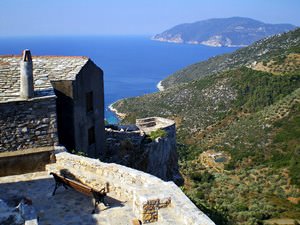 Remember that those local inhabitants who live in distant Alonissos villages have a measured life and they follow national traditions. That’s why you should behave appropriately. Don’t leave the beach in a bikini and don’t put on open clothes. Moreover, you should control yourself even if you have drunk a lot. Despite the fact that local citizens love local retsina and ouzo, you will hardly meet wild drunk people on the streets. This is because invariable behaviour is a disgrace for Greeks.
Family holidays with kids in Alonissos Island. How to entertain your child, things to show to children.
Alonissos is a small peaceful island in the Sporades group. There are not many tourists because the earthquake in Chora in 1965 slowed down the development of tourism. Despite the fact that …

Open
One more way to turn a Greek against yourself is to say something unpleasant about Greece. Locals are great patriots. What's interesting, they love to criticize the government but they can't stand when foreigners do the same. If you want to win the favour of a Greek person, just pay a couple of compliments to the island and Greece. While communicating, remember that if a local asked you not to call him by the first name, you should call him by the second name.
Greeks are open and emotional people. They like to interrupt each other, raise voice, touch people and use a lot of hand movements. Some of the gestures have their own meaning in Greece. Tourists think that when locals nod, they agree with you, but that is not right. A Greek “yes” is tilting the head to either side and making a sideways motion while slightly closing the eyes. When they want to say something, they touch or pat the lower lip with the index finger. When Greek people signal to somebody to join them, they extend their arms with their palms facing downwards. Then they open and close their fists, their fingers moving up and down. If Greeks want to show neglect to a person, they pretend brushing off the dust of the lapel of the jacket. Copyright www.orangesmile.com
Cuisine of Alonissos Island for gourmet with top restaurants and cafe
Despite the fact that there are only about 3000 inhabitants on Alonissos, you will easily find many catering establishments here. Locals can't imagine their life without an evening in a …

Open
Alonissos is filled with festive and relaxed atmosphere. Greeks believe that the most important thing is to get the most of life. You will never meet workaholics here. Siesta plays an important role in Greece. Try to plan your day from 2 to 5 o’clock. Almost all the cafes, shops and public places are closed during the period of siesta. Locals sleep at home or sunbathe during this time, they try to gain strength to finish the working day. The working day is finished at 9 pm and then the fiesta starts, it is time for leisure and meetings with friends. The island becomes an open-air dance floor. 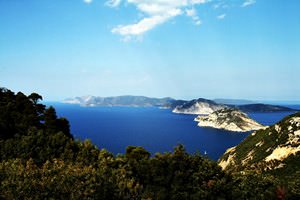 Locals are sure that there is no need for money if they don’t make you happy. So, you won't meet workaholics here. Greeks are bad investors and even if they get a large sum of money, they will spend it on an evening in a tavern or beautiful but useless things. It is noteworthy that Greeks are hospitable people, but invitation to their house doesn’t mean that you will have a meal there.
Excursion over cultural sights of Alonissos Island - 'must visit' points of interest
Despite the fact that Alonissos was inhabited long ago, it didn't play an important role in the events of Antiquity and Middle Ages. Leaders changed one after another, one era followed …

Open
Greeks marry late and they love to flirt with women even being married. But don’t take it seriously, they will just pay you a couple of compliments. Locals love to teach people and give morals. All of the main religious holidays are celebrated on the island. Moreover, secular holidays such as the Independence Day are popular here. Threshing Festival is held every July in the Old Village. You can try national dishes here and listen to folk music.

This guide to traditions and festivals in Alonissos Island is protected by the copyright law. You can re-publish this content with mandatory attribution: direct and active hyperlink to www.orangesmile.com.
Alonissos Island - guide chapters 1 2 3 4 5 6 7 8 9

Survived castles around Alonissos Island
♥   Castle 'Skiathos Castle' Skiathos, 35.3 km from the center. On the map

Colors of Alonissos Island in photos

Traditions and festivals in cities around Alonissos Island

Sporades Island
They most often address unfamiliar people as kyrios ("mister" in Greek) and kiriya ("Mrs."). They also address the representative of the older generation this way, showing their respect. If a Greek did not ask you to call him by his name, it is appropriate to refer to the surname. The local residents are not too punctual, so do not expect that a Greek will certainly come on ... Open »
Skopelos Island
During a conversation Greeks raise their voice without a reason, they use a lot of hand movements, touch and interrupt each other. It is customed here to greet everybody by kissing in both cheeks. Greeks shake hands only at first meeting. If a Greek didn’t ask to call him by the first name, you should politely call him by the second name. Moreover, it is customed here to ... Open »
Skiathos Island
Greeks always teach people and give morals. It is getting worse with age. However, elderly people are highly respected here. Many Greeks live with their parent up to thirty. Local men love to flirt with women and compliment them. They are even not embarrassed by the presence of their wife or girlfriend. Skiathos inhabitants are orthodox people. They celebrate the Independence ... Open »
Evvoia Island
Evvoia citizens, as the rest of the Greeks, are Christian. That is why all the Christian holidays are celebrated hugely here. An interesting holiday is St. John the Baptist’s Day. St. John’s remains are located in one of the temples in Prokopi city. According to the legend, John, who was a simple soldier, resisted tortures from the Turkish for many years, thanks to the ... Open »
Thessalia Region
One of the most extraordinary festivals is held in Tirnavos, a town near Larissa. During Butter Week, which is the week before Great Lent, the annual phallus festival, or “Burani”, takes place here. Within the festival’s days, phallus images can be found everywhere, in every street of the city. Various bottles, ceramics, buns, and balloons in the form of a reproductive ... Open »
Athens
Athenians never take their shoes off even when entering a home. They are very hospitable, but invite guests for a dinner or lunch quite rarely. The period starting from 2 to 6 p.m. is considered the time of day rest, so it would be better to refrain from phone calls on this time. You should also not call and after 10 p.m. as it will also be the sign of bad manners. Every ... Open »