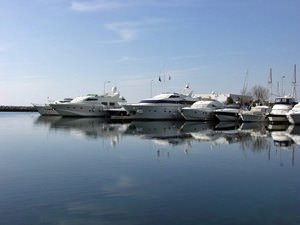 The cultural capital of Greece - Thessaloniki – never ceases to attract travelers by dozens of iconic architectural and cultural landmarks. Hagia Sophia, Arch of Galerius, Heptapyrgion, and OTE Tower is, by far, not the complete collection of objects of interest. In this review, we will try to include descriptions of the most important architectural landmarks of Thessaloniki. We accompany them with interesting facts, colorful photographs, and 3D virtual tours. These 3D tours allow you observing the landmarks from a bird’s eye view. Simply turn on the HD video and enjoy the flight! 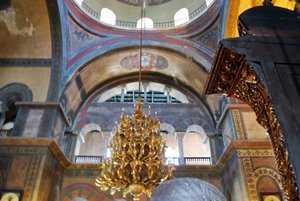 Facts:
» There is a church near the sea. It was first constructed here in the 3rd century.
»  After five centuries of existence, natural disasters, and reconstruction, we can see the building preserved since that time. The church doesn’t differ from traditional Greek religious constructions that characterize the middle Byzantium period.
»  Orthodox services resumed in 1912. There had been a mosque since 1430.
»  The House of God is distinguished by a dome with a cross surrounded by stars and signs in the form of intertwined letters in honor of benefactors. The vault is decorated with an inlaid picture depicting Christ’s accession to Heaven. There are 12 followers of Christ, the Mother of God, and the angels around it. The arch depicts the Virgin holding the baby.
»  The temple is named after St. Sophia the Wisdom of God.
»  The first written reference date back to 795.
»  The square temple is divided by columns. Their top protruding part is crowned by the leafy ornament.
»  The walls seem marble due to plaster covered in a certain way. It is decorated with a floral pattern.
»  The hall (porch) is decorated with mosaics and frescoes. They were created in the 11th century. 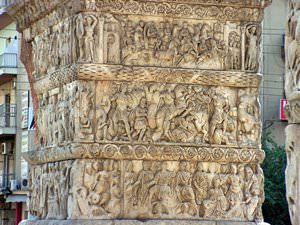 Facts:
» The Sasanid’s victory over the Persian Empire is represented by the monument in the form of the arch doorway. It was constructed upon the order of Emperor Galerius.
»  The triumphal construction date back to the late 3rd-early 4th century. The arch linked galleries that led to the mausoleum and the palace.
»  There are embossed scenes of battles on all the walls of the brick pedestal. Wide panels of the four-tier canvasses depict the great defeat of the enemy.
»  Canvasses are separated from each other by a chain decorated with flowers and leaves. The upper cornice is decorated with sculptural chamomiles.
»  The solid molded picture depicts figures with improper proportions, for example, horses look smaller than riders. This style is called “narrative composition”.
»  According to the inscriptions, the sculpture was created by Greek masters.
»  It depicts battles, forgiven captives, and parts of city constructions. Figurines of elephants and camels represent battles held in the East.
»  The preserved part of the wall is 29 m long.
»  The arch of the early Christian and Byzantium architectural style gained the status of the guarded cultural object. 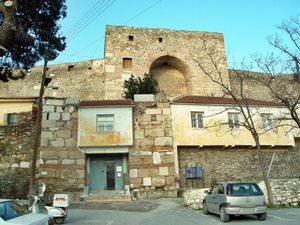 Facts:
» There is a fortification in the Old Town.
»  Its Ottoman and Turkish name is Yedikule. It is translated as “Castle of the Seven Towers”. Actually, there are ten towers. Each one has its Turkish name. Later, three objects became separate fortifications.
»  Ancient walls are made of boulders. The building was first mentioned at the beginning of the 13th century.
»  You can see the preserved Ottoman inscription (1431) on the outer side of the main gate. It meant that the acropolis was in the position of Turkish troops.
»  In Heptapyrgion, the garrison superiors and 300 soldiers met. The command deployment had been established until the 19th century. Then, the building came to prison guards.
»  All the criminals - men and women - were detained here despite their age, the gravity of the offense, or political reasons. Prisoners were also tortured in the building. Decades of people were executed here. This continued until 1989 when the prison was moved outside the city.
»  Heptapyrgion became part of the Ministry of Culture. Archeological investigations were started to be held in the fortress.

Facts: » The citizens are proud of their cultural district with the OTE Tower. The City Salonika TV Tower is a local attraction.
»  The observation platform of the 76-meter white construction has a picturesque panoramic view of many narrow streets, squares, historic buildings, and parking areas. You can use a lift here.
»  It was built in 1966. The TV Tower served as an antenna receiver of TV and ultra-short waves for mobile communication.
»  At the same time, the first black-and-white TV show was broadcast here.
»  After the restoration, the building looks more modern. There is a restaurant at the upper level. It turns around its axis. You can observe landscapes from all sides within 40 minutes.
»  Different official visits and business meeting are held in the OTE Telecom Tower. There is a Greek flag, the symbol of nationhood, in the front of the skyscraper.
»  ОТЕ is the name of the Greek leading telecommunication company. Due to the crisis in 2010, the company management intended to sell their share fraction for €560 million.

Facts: » The quadrangular Christian basilica was built on the site of Roman baths. The ruins of ancient thermae are still present here.
»  The building is named after the Great Martyr Demetrios, an officer of the Roman army who was tortured to death here.
»  The construction survived numerous fires and an earthquake.
»  During the Turkish rule, the building served as a mosque.
»  In the early 20th century, Christian services were resumed in the church.
»  During restoration works, the entrance to a dungeon with tombs was discovered. A capsule with the apostle’s relics was walled up under the altar stand. According to legend, they had been there since 306.
»  Some of the mosaics and frescoes (5th and 7th centuries) remained intact on the walls of the church.
»  There is a marble vessel surrounded by columns. The sacred oil oozing from the remains of Demetrios was collected there. Nowadays visitors leave coins in the bowl making a wish.
»  There’s a museum of archeology in the crypt. The items of ancient Greek origin – kitchen utensils, coins, mosaics – found during the excavations are on display here.
»  The patron saint’s five-aisled basilica is protected by UNESCO.

CONTINUE - PART II »»
This guide to architectural sightseeing in Thessaloniki is protected by the copyright law. You can re-publish this content with mandatory attribution: direct and active hyperlink to www.orangesmile.com.
Thessaloniki - guide chapters 1 2 3 4 5 6 7 8

Build your walking routes in Thessaloniki on the landmark map

Architectural landmarks in the regions around Thessaloniki

Sofia
The St. Alexander Nevsky Cathedral is a cathedral dedicated to Russian soldiers who freed Bulgaria of the Turkish yoke. The cathedral was built by patriots of Bessarabia, Dobrudzha, Austria, and Russia. In 1882, the first stone was laid. The construction lasted from 1904 to 1912. It had been named after Saint Cyrill and Methodius until 1920. The cathedral was declared a cultural monument only in 1924. The building was designed by Russian ... Open »
Athens
Parthenon is the main temple in the ancient city of Athens, which was dedicated to the patroness of the city, the goddess Athena. The Parthenon is located in the Athenian Acropolis. The temple was built in the years 447-438 BC. Today the temple is in dilapidated condition, but there is ongoing restoration work. Although the temple seems perfectly square-cut, there are almost no straight lines in its contour, and the columns of the temple ... Open »
Dubrovnik
Dubrovnik is famous for its shield in the form of 2-kilometer fortress walls. The complex is located on the rocky bank. There are additional fortifications in some places. Starting from the historic center, the walls create a circle and turn the city into an impregnable fortress. The fortification was constructed in the 10th century. The limestone walls have been repainted many times for the last centuries. They gained their current appearance ... Open »
Bucharest
The Palace of the Parliament was built at the time of the Socialist Republic of Romania. It is one of the most famous architectural monument in Bucharest. The Palace is considered as the biggest civil and administrative building in the world and the largest parliament building. The total area of the Palace is 270x240 m. The building is 86 m high. The underground part of the Palace is at a depth of 92 m. In the building, there are 1 100 ... Open »
Beograd
The place where the church was built is memorial. Here, the relics of the first archbishop of Serbia were burnt upon the order of the Ottoman ruler in the late 16th century. He contributed to the establishment of the independence of the Orthodox Church. The funds on the construction of the House of God started to be raised in 1895. The temple still exists on donations. It was opened in 2004 due to historical conflicts. The main dome that ... Open »
OrangeSmile.com - online travel reservation expert providing reliable car rental and hotel booking services. We feature more than 25.000 destinations with 12.000 rental offices and 200.000 hotels worldwide.
Secure Server