Cuisine of Sicily for gourmets. Places for dinner - best restaurants 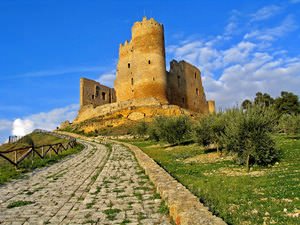 The main feature of Sicilian cuisine is its versatility. Culinary connoisseurs can easily recognize typical Greek, Spanish and Arabic features; their harmonious combination determines the national cuisine. In this article, we will focus on the most popular Sicilian dishes, which are definitely worth a try.
Authentic traditions, festivals and lifestyle of Sicily inhabitants
Cultural traditions of Sicily represent a unique phenomenon, which has found expression in the most interesting folk festivals and customs. During the year, the island celebrates a variety …

Open
In local restaurants delicious pasta, alla norma, is served. You won’t be able to try anything alike in any other Italian city. It is cooked with an addition of eggplant and ricotta, as well as traditional tomato sauce. Demanding travelers usually like pasta alla palermitana with raisins, anchovies, fennel and parmesan cheese. Also, a typical Sicilian dish is pasta con la mollica; this kind of pasta is cooked with breadcrumbs and served with salted anchovies. The taste of some local food is very unusual, however, it is very attractive.
The place of honor in the national cuisine belongs to the seafood menu. Any market place offers visitors not only fresh seafood, but some unique dishes of it. The local delicacy is a swordfish cooked in many different ways. The simplest version of the exquisite dish is grilled fillet pesce-spada. Copyright www.orangesmile.com
Excursion over cultural sights of Sicily - 'must visit' points of interest
The trip around cities of Sicily will be an unforgettable experience, because each of them has its amazing sights. The most important historical monument in Palermo is the Palace of the …

Open
In national restaurants and small street cafes the whole range of seafood often have the same name, antipasti, which literally translates as starters. Usually, such a feast is served on a large flat plate and includes a variety of fish, shrimp, mussels and clams. It should be noted that the shellfish is served exclusively in shells, so the client won’t have any doubt in its freshness and high quality. 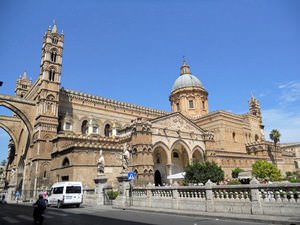 In addition to traditional treats from pork and veal, fans of meat dishes are offered pretty creative dishes made ​​of horse meat. Traditional food is cotolette schnitzel and small rolls of veal, involtini alla siciliana, served with a variety of toppings. Choice of vegetable dishes in Sicilian restaurants is huge; in addition to meat and fish treats, guests are always offered to order fresh salads and interesting vegetable side dishes. We should also mention desserts, including refreshing granite, which is popular among foreigners, and crispy cannoli rolls with a creme filling.

This guide to cuisine and restauraunt in Sicily is protected by the copyright law. You can re-publish this content with mandatory attribution: direct and active hyperlink to www.orangesmile.com.
Sicily - guide chapters 1 2 3 4 5 6 7 8

Michelin-starred restaurants in Sicily
♥   Restaurant 'Nangalarruni' CASTELBUONO. Type - Sicilian. 32.9 km from the center. On the map

♥   Restaurant 'Palazzaccio' Castelbuono. Type - Regional cuisine. 32.9 km from the center. On the map

Distance from Sicily center - 56 km.
The old monastic church of Santa Maria dello Spasimo is one of the main historical attractions of Palermo today. It was never fully completed after construction began. The church was deserted many years ago. It is in a dilapidated state today. The history of the construction of the shrine is associated with the name of a wealthy lawyer Giacomo Basilico. He was a great admirer of the image of the Suffering Virgin. He donated land from personal holdings to the monks in 1506. Giacomo Basilico decided to establish a church and monastery in honor of the Virgin Mary's image on this land. … Read further

Searching where to eat - restaurants and cafe on Sicily map

Cuisine and restaurants in the neighbours of Sicily

Palermo
The Trattoria ai Cascinari restaurant is considered to be one of the most friendly and welcoming eating places of the city. In the day time the hall of the restaurant is filled with a cozy and quiet atmosphere which makes the eating house to be a perfect place for business meetings. In the evenings the guests of the restaurants are entertained with an excellent program. The ... Open »
Trapani
It's incredibly exciting to watch the life of the fish market while sitting on the terrace waiting for your portion of tuna or mussels. Besides, seafood is always fresh in such restaurants. You can also arrange the preparation of your catch or your own selected fish here. The list of fish you can try in Trapani is large. This can be anchovy, lampuga, gurnard, hake, swordfish, ... Open »
Catania
Local restaurants will also be liked by fans of cheese. The most famous and sought-after sorts of the product produced at local plants are Caciocavallo and Pecorino siciliano. Tourists are recommended to try an interesting national dish named arancini. These are small rice balls, which can be cooked with a variety of fillings. Without a doubt, local pizza is certainly worth a ... Open »
Ustica Island
If you want to taste a local liquid dish, you should order minestrone. This dish is a pearl of Italian cuisine because of its recipe. The original recipe includes seven different seasonings, meat and vegetables. Unfortunately, you won’t find this dish, made according to the original recipe in every restaurant. Local vegetable soup is a delightful dish too. Try to order a ... Open »
Vulcano
It should be noted that the gifts of the sea are the main ingredients of the national menu. The dishes cooked by the locals of fish and shellfish are quite simple and natural. Shrimps, fish and mussels are grilled. When they are cooked, the minimal amount of spices is added, so the dishes have a very natural flavor. Seafood is often served with equally simple and nourishing ... Open »
Favignana Island
There are also quite traditional first meals on the island. Many locals love a simple vegetable soup on chicken or vegetable broth. The dish is incredibly delicious if it was made of fresh ingredients but not frozen products. You should be careful because even expensive restaurants use frozen products in their dishes. Don’t miss a chance to try minestrone. It is a famous ... Open »

Travel notes on best cuisine and restaurants of Sicily (Italy) on OrangeSmile.com. Famous recipes and traditional dishes and courses in Sicily restaurants. Where to eat - our recommendations on popular places in Sicily, where you can taste delicious meal and also spend a good time with your friends.