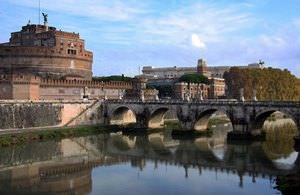 Many tourists may find the habits of local residents quite unusual. Thus, when gallant and polite Italians gather in the crowd, they can create a real "crush". You may be surprised, but such behavior is not considered rude. Local residents are accustomed to huge crowds in public transport and shopping centers, so they simply try to free their way in all possible ways. Many local residents actively use body language during a conversation, but among the representatives of elite such gestures are considered a sign of bad manners.
Top touristic routes around Rome: architectural sightseeing and landmarks
Discovering the architecture of Rome from bird's eye view! Colosseum, Saint Peter Basilica, Vittoriano, Castel Sant Angelo, Santa Croce in Gerusalemme, Baths of Caracalla, Arch of Septimius Severus, all those monuments are defining the image of Rome …

Open
Italians are not accustomed to have a nourishing breakfast, so the majority of local cafes and restaurants offer to their guests coffee and fresh rolls for breakfast. Lunch is considered the main meal. As a rule, it consists of at least three dishes. A dessert, which is so familiar to Europeans, Italians can replace with cheese platter and a glass of wine. Drinking wine is not forbidden here even in the middle of the day. Despite the love of local people to this drink, the general attitude to alcohol here is more than restrained. Alcohol is most often taken only during the meal. When it comes to appearance and clothes, the locals prefer to dress in a strict and formal way. No extravagant and revealing dresses are worn in everyday life.
Day of the foundation of Rome is the most interesting national holiday. It is celebrated annually on April 21. Sometimes the celebration lasts for several days and during the holiday here are organized various interesting cultural events and ceremonies. By the way, every year the goddess of Rome is chosen during the festival. This is the winner of a beauty contest. Vestals play one of the main roles during the holiday. Vestals are girls who are the messengers of the Roman goddess Vesta. They carefully monitor compliance with all ancient rites. During the festival they must keep an eye on the sacred fire, which, according to an ancient legend, is the incarnation of goddess Vesta. During the celebration travelers can watch interesting theatrical performances, which are devoted to important historical events. All main events take place near the temple of Hercules. Copyright www.orangesmile.com
Cultural vacation in Rome - fantastic architecture and monuments
Pantheon, Sant Agnese in Agone, St. John Lateran Basilica, Santa Maria Maggiore, Galleria Borghese, as well as many others, they all become the world's cultural heritage objects and remain as iconic monuments for Rome …

Open
The most interesting national holiday is the Foundation Day, which is celebrated on April 21. This celebration has the tendency to stretch for several days. During the holiday, you will be able to enjoy a lot of interesting cultural events and rituals. Every year, locals choose the Goddess of Rome, which becomes the winner of the beauty contest. One of the main roles during the holiday is given to the Vestals - the girls in the image of the emissaries of the Roman goddess Vesta, who follow the observance of all the ancient rituals. During the holiday, they must follow the sacred fire, which, according to an old legend, is the embodiment of the goddess Vesta. During the celebration, you can watch theatrical performances, which are devoted to important historical events. The main events are held near the temple of Hercules. 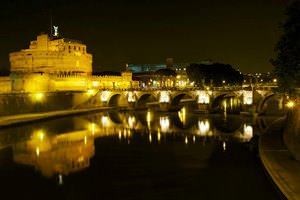 As in other European countries, the period of Christmas-New Year holidays and vacations lasts from December 25 to January 6 - from Christmas to Epiphany. New Year or Capodanno - one of the favorite holidays, and is celebrated everywhere, including Rome. The city acquires a festive look, the streets and squares are decorated with the appropriate New Year's attributes. At the same time, there is a period of school holidays, and it is natural that children get special attention during the New Year holidays. If you travel with children to Rome, then definitely you should visit the Navona Square, where you will enjoy the traditional fair-festival of toys. On January 1, Italy also celebrates the International Day of Peace.
Guide to Rome sightseeing - things to see and to visit
The Eternal City has attracted the attention of millions of people for more than 2000 years. It is still one of the most beautiful and romantic cities in the world. Rome is the essence of …

Open
Festivals held in the capital are devoted to the most diverse facets of art and cultural life. One of the most famous and popular events of Rome is the International Film Festival. Passionate music lovers will surely enjoy the June festival of music Luglio Suona Bene - an open-air festival, accompanied by concerts of international and Italian stars of various musical styles. If you prefer jazz motifs, the Casa del Jazz Festival can become a real holiday for you, in which take part both young musicians and world-famous singers. For connoisseurs of art, we recommend that you visit the festival Romaeuropa, the largest cultural event in Europe, combining such areas as dance, music, theater and visual art. 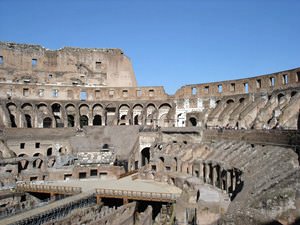 Among the most significant events in the literary world is the International Literature Festival in Rome. For ten days in the Basilica of Maxentius in the Roman Forum, you will be able to hear new texts performed by theatrical actors and take part in their discussion. Among the important sporting events, it is worth noting Fiera Internazionale della Cina - an event that is part of a large project the purpose of which is the propagation and dissemination of oriental culture and philosophy through martial arts.

♥   Chiesa di Santa Maria dell’Umiltà, Roma, 0 km from the center. On the map

♥   Castle 'Castelseprio Castle' Castelseprio, 10.1 km from the center. On the map

Colors of Rome in photos

Traditions and festivals in cities around Rome

Lazio
One of the most beautiful and oldest national holidays in the region is the Macchina di Santa Rosa; it takes place every year on September, 3 in the picturesque town of Viterbro. The festival is dedicated to the patron saint of the city; this event is more than 750 years old. The solemn procession begins promptly at 9:00 pm at the Church of St. Damian housing an ancient statue ... Open »
Isole Pontine
While traveling among the Pontine Islands, remember that the locals, like all the Italians, are very expressive. In the conversation, it is more important for them to express an emotional attitude than to convey the facts to the interlocutor. Therefore, do not take a raising voice, hands waving and interruption as a threat – it is just a normal way of communication here. You ... Open »
Perugia
Central streets of the city of Perugia are equipped with specialized concession stalls which offer dainty chocolate treats not only for tasting but also for sale. Everybody can buy a box of desired sweets as a memorable gift. Many events held within the festival take place in exhibition centers. Candy makers and confectioners present to the attention of festival visitors ... Open »
Marche Region
The first thing you notice about the behavior of the Italians is the desire to enjoy everything in life. The food – without a rush and in a good company, morning – only with a cup of coffee, free time – with family and friends. As in many warm countries, in Italy, they have a siesta time in the middle of the day when mostly all places are closed. Keep in mind this ... Open »
Isola di Ischia
One of the characteristic features of the Italian mentality is the desire to always and in all circumstances adhere to the bella figura. You can translate this expression as "keep style". In fact, we are talking about certain conventions of public behavior. For example, no self-respecting Italian woman will even go out to buy bread without makeup or wearing home cloth. By the ... Open »
Procida Island
Procida is an island of contradictions. Behind a not very attractive local facade of a house often can be hidden an apartment full of works of art, and a sailor can be an avid theatergoer. Here, religion is an important element in everyone's life, but at the same time, they celebrate with the greatest scope the almost pagan Carnival along with Christmas, Easter, and the ... Open »

Cityguide on traditions, mentality and lifestyle of people in Rome. Learn the best periods to visit Rome to discover its soul - authentic festivals, events and celebrations. We will also reveal the interesting habits, attitude towards the world and to tourists in Rome.