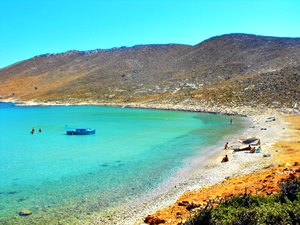 Kalymnos has a very rich history. Scientists believe that it was inhabited in ancient times. The first people who inhabited the island were the Carians. Kalymnos came under the influence of the neighbouring Kos Island and was dependent on him. Later it was inhabited by Byzantines, Venetians, Hospitallers, Turks and Italians. There is still evidence of these different cultures on the island. That’s why the island attracts amateur historians and curious people.
Authentic traditions, festivals and lifestyle of Kalymnos Island inhabitants
While communicating with Greeks, remember that they are emotional people and can easily interrupt each other and raise their voice even during a dialogue with close people. Locals touch …

Open
You can start your acquaintance with the island from its capital, city-port Pothia. The settlement itself is small, cosy and Greek. Pothia is not an ancient town. It was built in the 19th century when it was not necessary to live behind stone walls to hide from pirates. The Castle of Chora was built in the 11th century. This building reminds people of ancient times. The castle was rebuilt in the 14th-15th centuries and we can see the building of those times. The building was partly destroyed by time and weather, but it still deserves your attention.
Museums on Kalymnos attract a lot of tourists. There are several museums despite the small size of the island. Don’t pass by the Archaeological Museum. It is housed in a beautiful mansion of the 19th century. Its collection is rich with unique items and it is considered to be one of the best collections on the Ionian Islands. Weapons and armour of different eras, household items and works of art will help to understand how people lived here centuries ago. The Ethnographic Museum will send you to the 18th-20th centuries. It is exhibition tells about Greek customs and traditions. Be sure to visit the Monastery of Saint Sava. It is also called the Monastery of all Saints. There are a small library and a museum inside the monastery. Copyright www.orangesmile.com
Your active city break in Kalymnos Island. Attractions, recreation and entertainment - best places to spend your day and night here
Kalymnos is an ideal place for active tourists. The island is incredibly popular among climbers from all over the world. There are hundreds of climbing routes on the island. They are all of …

Open
The Church of the Christ the Savior is beautiful too. There are wonderful frescoes and icons inside, made by local artists. Be sure to visit the Sponge Factory in Kalymnos. It is dedicated to sponges. This is not surprising, the sponges are still produced on Kalymnos. There is only one sponge factory in the capital of the island, Pothia, it tells people about the history of sponge-fishing, the methods used to dive and the process of elaborating sponges. The sea museum «Valsamidis» also deserves your attention. Its exhibition consists of all the Aegean species. What’s interesting, the museum was founded by two persons, who collected the exhibition. The Maritime Museum of Kalymnos was founded in 1994. It has a rich collection of items, connected to sea and sailing. 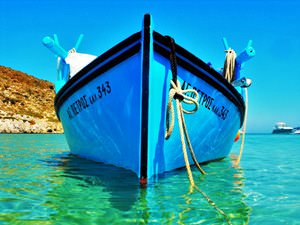 Don't miss the chance to visit the castle of Chora or Hrisoheriya. It was built in the 15th century. There are several interesting attractions near Vathy. For example, the ruins of ancient settlement Rina. Don’t pass by a Paleopanaghia church, where you can ancient mosaics of the 6th century. There are several ancient Byzantine basilicas near the Chorion. There are also ruins of antique settlement Damnos and the temple of Apollo who was the patron of the island.

In the section below, you can get one of our excursion, activities or city discovery tours over Kalymnos Island and surroundings. Our website offers 10-30% lower ticket prices, when compared to the offline purchase on the spot.

This guide to cultural sights Kalymnos Island is protected by the copyright law. You can re-publish this content with mandatory attribution: direct and active hyperlink to www.orangesmile.com.
Kalymnos Island - guide chapters 1 2 3 4 5 6 7 8 9

Excursions over cultural sights of neighbours of Kalymnos Island

Leros Island
Perhaps the most interesting attraction of Lakkion is in the Merikia suburbs. It is where the Military Museum is located. The place was not chosen by chance: during World War II, the Italian naval base was located in its place. The exposition presented in the museum will be interesting and fascinating for those who like history and for those who just want to expand their ... Open »
Kos
Archeologists continue to work on the island in these days. All who want to may see their findings in museums. The Archaeological Museum located in Elevterias district has assembled a fine collection of artifacts. Here are statues of gods dating to the 4th century BC and ritual objects, as well as jewelry and articles of precious metals. The best place for hiking is seafront, ... Open »
Bodrum
Myndos Gates are an important historical object. Many centuries ago the gates served as one of the entrances to the old town. Previously the gates were a part of a powerful fortification; today tourists can see only the ruins of ancient walls that once have protected the city from uninvited guests. The only conqueror, who had managed to overcome this strong fortification, was ... Open »
Patmos Island
It's worth spending some of your time on a walk through the streets of the port city of Skala. Though it is quite young, as they started building here only from the 19th century, when the threat of pirate attacks passed, it is on these streets where you can see many fine examples of a century-old architecture. It is worth wandering around the capital city of Patmos or Chora. ... Open »
Tilos Island
Also, there is a small museum on the first floor of the local town hall and one of the exhibitions there is remains of a dwarf elephant which were found here on the island. Moreover, there is a couple of extremely beautiful churches in Megalo Chorio: the churches of Panagia Theotokissa, Saint Taxiarches and Agia Triada are wonderful examples of religious architecture. ... Open »
Samos Island
There is a beautiful monastery in a dozen kilometres from Samos. It is called Zoodochos Pigi. On your way to the monastery, you come across one more attraction- the monastery of Agia Zoni with a functioning church. The oldest Christian Church on the island is Metamorphosis near Karlovasi, it was built in the 11th century and almost haven’t changed. Be sure to visit Milos ... Open »