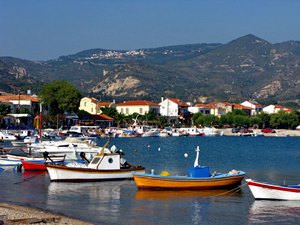 Arrived on Samos, be sure to visit two large settlements, they are Pythagoreio and Vathy. The second one is the capital of Samos. Pythagoreio is a cultural centre of the island. When scientists arrived there to explore the land, they understood that the village was situated at the same place, where the first settlers lived in the third millennium BC. The interesting thing is that the cult of the goddess Hera had originated on Samos in times of the Minoan and Mycenaean civilizations.
Cuisine of Samos Island for gourmet with top restaurants and cafe
Greek cuisine won’t leave you indifferent. If you want to get to know national cooking traditions on Samos, choose a place far from touristic spots. Greeks love taverns, which are …

Open
According to a legend, Hera was born on Samos. That’s why there was built a temple named after her. This building is considered to be a world wonder. What is interesting, the temple is built on the foundation of an ancient building. Nowadays, the Heraion is partly ruined, but tourists enjoy visiting this place. The dam and Tunnel of Eupalinos were built in 538 millennium BC. The last one had been found with the help of Herodotus notes. Presently, the tunnel is visited by tourists.
There is a monument of Pythagoras on the coast of Pythagoreio. Be sure to visit the local paleontological museum. Samos lands have a very colourful history. Battles changed into peaceful times, villas and temples were built and ruined, civilizations succeeded each other. All material evidence can be found in a rich collection of the local museum. Don’t miss the opportunity to visit castles of Mark Antony and Cleopatra. The cave of Pythagoras and Folklore Museum are very important historical attractions on Samos. Copyright www.orangesmile.com
Authentic traditions, festivals and lifestyle of Samos Island inhabitants
Greeks may seem quite lazy for some tourists. But Greek mentality plays a key role in their behaviour. They are used to live as they please. Money and wealth don’t play a great role in …

Open
However, there is a great exposition in the Natural History Museum. Those, who are fond of ancient times should visit the paleontological museum of Mytilene. You can go to Ireon and see the archaeological excavations in the open air, which are located near the local airport. This place is also famous for an Ireo column, which can be found on every guide-book cover. 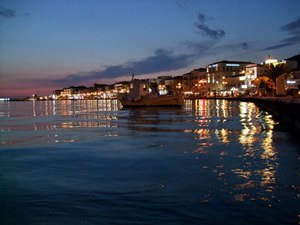 Samos is considered to be a pear of Greece, but there are not only antique monuments. Monastery of Panagia Spiliani is famous for a church of our lady, built in the cave. Spiliani is also known as an observation deck. Megali Monastery and Monastery of the Holy Cross are situated near Kumaradi village, which attracts pilgrims not only from Greece. The monasteries were built in the 16th century.
Your active city break in Samos Island. Attractions, recreation and entertainment - best places to spend your day and night here
One of the most popular ways of time spending on Samos is diving. Despite the thousands of tourists, there is still a rich underwater world. The thing is that diving was prohibited till …

Open
There is a beautiful monastery in a dozen kilometres from Samos. It is called Zoodochos Pigi. On your way to the monastery, you come across one more attraction- the monastery of Agia Zoni with a functioning church. The oldest Christian Church on the island is Metamorphosis near Karlovasi, it was built in the 11th century and almost haven’t changed. Be sure to visit Milos village. According to the legends of the ancient Greeks, Hera met Zeus at that exact place. As you can see, there are so many sites on Samos and you can't see all of them in one go.

In the section below, you can get one of our excursion, activities or city discovery tours over Samos Island and surroundings. Our website offers 10-30% lower ticket prices, when compared to the offline purchase on the spot.

City tours, excursions and tickets in Samos Island and surroundings

This guide to cultural sights Samos Island is protected by the copyright law. You can re-publish this content with mandatory attribution: direct and active hyperlink to www.orangesmile.com.
Samos Island - guide chapters 1 2 3 4 5 6 7 8 9

Excursions over cultural sights of neighbours of Samos Island

Samos
The center of the city locates a marvelous street running along a seaside which main attraction is the Statue of Pythagoras. The island is a birthplace of many antique noble people, with Epicurus, Pythagoras, Aristarchus and Melissus among them. Natural attractions admirers will love to visit the Pythagoras cave which is formed in one of the stiff slopes. One can get to the ... Open »
Kusadasi
The castle on Guvercin Island is a striking monument of the Byzantine era, sometimes it is referred to as ‘pirates’ fortress.’ It owes its name to the legend telling that the fortress served as a refuge for Khair ad-Din pirate, who is better known as Barbarossa. Recently, a powerful fortification was completely renovated; some of its rooms host a historic museum. Kale ... Open »
Patmos Island
Patmos is known throughout the world as the "Island of the Apocalypse". It was here, as the legends say, where in one of the caves in the first century of our era John the Theologian received a revelation about the End of Times. The Cave of the Apocalypse is today a place of pilgrimage for many Christians from all over the world. Nearby is the temple of St. Anne and the ... Open »
Ikaria Island
One of the main evidence is the ruins of ancient Acropolis close to Agios Kirykos. However, the capital is famous not only for ancient ruins. Be sure to visit the Archaeological Museum of Agios Kirykos. There are exhibited weapons, household items and costumes of locals’ ancestors. The church of Agios Kirykos is a nice building. The Monastery of Mounte Evaggelismos ... Open »
Izmir
Bazaar is an interweaving of numerous narrow streets and alleys, the territory of which is fully occupied by various retail stores, craft shops and eating places. Tourists will also find here several old mosques and beautiful national buildings, which were built in the 18th century. It should be noted that all historical buildings of the city are regularly reconstructed, so ... Open »
Kalymnos Island
You can start your acquaintance with the island from its capital, city-port Pothia. The settlement itself is small, cosy and Greek. Pothia is not an ancient town. It was built in the 19th century when it was not necessary to live behind stone walls to hide from pirates. The Castle of Chora was built in the 11th century. This building reminds people of ancient times. The ... Open »

Culture guide to Samos Island. Which fascinating sights to visit once you are in Samos Island: temples, churches, museums, theaters and castles. Recommendations (with addresses, phone numbers and links) on the places 'must visit' in Samos Island. Plan your own city excursion by using this page info!