Detailed hi-res maps of Kalymnos Island for download or print 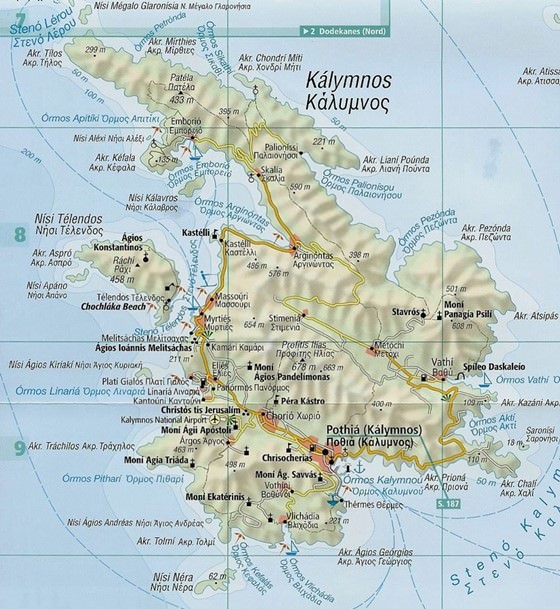 Moving around in Greece - transportation

Greece has a fairly developed transport infrastructure. There are many airports in the country, most of which are international. Domestic airlines connect the capital with major tourist cities and islands. Sea communication is also well-developed. Some believe that water transport in Greece is excellent. A huge number of ferries and ships run from the islands to the mainland around the clock. Together with ships, small boats and large cruise liners carry passengers. The largest and most significant port is in Athens; it is called Piraeus. Despite such a developed water communication, many archipelagoes are still not connected with each other, so tourists have to plan transfers. … Open

Search for services, infrastructure and sights on map of Kalymnos Island

Our guide chapters over Kalymnos Island

The first thing you should buy on Kalymnos is sponges. After the invention of synthetic analogues, the popularity of natural sponges fell but most of the inhabitants of the island still produce them. The best place to buy sponge is a local market, try to find those which have been less subjected to chemical treatment. They are quite inexpensive here, and you can bring such interesting and practical souvenir to all … Open

The coastal town of Vlihadia is larger and has two lovely beaches, sandy and pebble. Both beaches feature very relaxed atmosphere and are shallow, so they ideally suit for families with children. Travelers who like to combine beach vacations with scenic walks won’t be disappointed, as thickets of trees come close to the coast of Vlihadia. The most beautiful beach on the island is Masuri situated in the … Open

Kalymnos Island for children - what to visit

Kalymnos is a great place for curious and active children. There are no amusement parks and waterparks, but historical attractions and sports centres will make holidays eventful. For example, teenagers can visit a state diving centre, which is the only one in Greece. There are no doubts that young climbers will love the island. There are different climbing routes on the island, due to its mountainous terrain. … Open

Kalymnos is an ideal destination for all fans of active recreation and sports entertainment. It is a great place to try various types of water sports. Moreover, there are several attractive diving sites not far away from the coast. As the terrain of this island is mostly rocky, Kalymnos attracts fans of alpinism. There are suitable areas for beginners who only make first steps in this dangerous sport and several … Open

Traditions and mentality of Kalymnos Island

While communicating with Greeks, remember that they are emotional people and can easily interrupt each other and raise their voice even during a dialogue with close people. Locals touch people during a conversation without any embarrassment. You should refer to the Greek is by the first name as long as he did not ask to call himself by the second name. People shake hands only at the first meeting, then they greet … Open

There are more than a dozen taverns on Kalymnos. They are popular not only due to a large number of tourists on the island. Many taverns are visited by Greek people. Many taverns on Kalymnos have been standing in their places for decades, owned by the same family. If you want to find traditional Greek food, which wasn’t changed for tourists, try to find a place far from touristic spots. But you should know that … Open