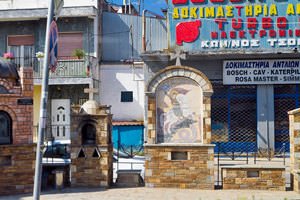 The city of Larissa is one of the oldest in the world, it was founded over 4,000 years ago. Today, many unique ancient attractions can be found in the city and its immediate vicinity. The ruins of an ancient theater, which was officially recognized as one of the oldest in Greece, are preserved within the city. The ancient ruins lie on the top of Frourio Hill that is presently located in the heart of the city.
Cuisine of Larisa for gourmet with top restaurants and cafe
Larisa will be a great destination to explore the traditions of Greek cuisine. The local cuisine is known for its naturalness, as only regional products are used for cooking here. Fresh …

Open
Over decades of research, archaeologists have managed to partially restore the old structure. Many years ago, the amphitheater could accommodate up to 10,000 spectators at a time. The ancient theater was built in the 3rd century BC by order of Philip V of Macedon. It was used for holding theatrical performances for the royal family, as well as for organizing mass meetings. The amphitheater was in active operation until the 6th century AD, and then it gradually fell into decay and collapsed.
One of the main cultural centers of Larissa is the Archaeological Museum. It has gathered the most valuable exhibits discovered by researchers in the region. The opening of the museum took place in 1924, initially it occupied the old monastery building. The museum was non-public for the first 30 years of its existence, only researchers and scientists could visit it. The museum became available to the public in 1957, its collection has expanded hundreds of times over the years. It is continuously replenished with new exhibits found in the region even today. Copyright www.orangesmile.com
Authentic traditions, festivals and lifestyle of Larisa inhabitants
Greece is not by chance considered one of the most conservative countries in the world. Locals treat their historical traditions with great trepidation. On national holidays, residents of …

Open
A very beautiful old mansion houses the Folklore History Museum whose collection is also striking with its diversity. This museum is one of the largest of its kind in Greece, housing a unique collection of folklore exhibits that was established in 1974. Rich collections of national costumes of various periods, traditional musical instruments and craft attributes are kept within its walls today. The museum's collection currently consists of about 20,000 exhibits, and it is simply impossible to see them all within one tour. The museum holds many thematic programs, among which there are special ones for children. It also serves as a permanent venue for interesting workshops on traditional crafts. 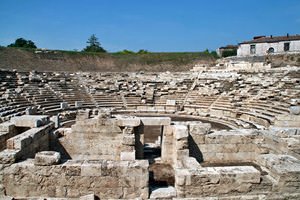 The city has many unique religious attractions, including the ancient Temple of Saint Achilles. It was built 300 years after the death of Achilles, near the tomb of the patron saint. The ancient temple almost entirely lies in ruins on the top of a hill. Local residents are still considering these places as sacred, associating many amazing legends and stories with them. On religious holidays, many pilgrims always come to worship the ruins of the temple.
Your active city break in Larisa. Attractions, recreation and entertainment - best places to spend your day and night here
Excellent conditions for recreation and entertainment are created in Larissa for tourists who, besides relaxing on the beach, can diversify their leisure time with interesting walks. Near …

Open
The main religious center of the city is the modern temple Ieros Naos Agiou Achilliou. The very first church was built on its site at the beginning of the 18th century. A few years after the consecration, it was destroyed by the Turkish conquerors, however, the townspeople have managed to restore it quickly. Later, the shrine was seriously affected by an earthquake that happened in the region in 1794. After the disaster, the temple and many other urban structures lay in ruins and there were no funds to restore them. The old church's reconstruction began only in the 20th century and was fully completed in 1941. 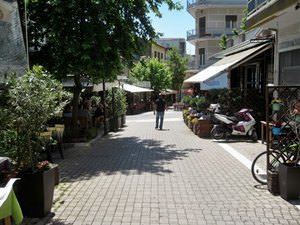 Now the temple is striking in its grandeur, it was built in compliance with the beautiful traditions of past centuries. Its exterior is adorned with unique elements of the decoration in the Byzantine style. Only authentic antiques were used for designing the interiors. In the evenings, the temple is artistically illuminated, so many come to admire the view after sunset. Every year on May 15, residents of Larissa celebrate a holiday in honor of their patron saint. On this day, they always hold solemn ceremonies in the temple.
Advices to travellers: what you should know while being in Larisa
1. In the vicinity of Larisa is a large international airport, which every day receives flights from many European countries. The main railway line of Greece, as well as major highways, …

Open
Not far from the main city temple is an interesting Ottoman monument - the old covered market. The 15th-century historic building somehow managed to avoid destruction during major wars and numerous earthquakes. The market is still active, many tourists visit it just to admire its beautiful old design. It's hardly possible to leave the main city market that is striking with an abundance of goods without making a purchase. Here they present the best regional products, as well as popular souvenirs and all kinds of handicrafts.

This guide to cultural sights Larisa is protected by the copyright law. You can re-publish this content with mandatory attribution: direct and active hyperlink to www.orangesmile.com.
Larisa - guide chapters 1 2 3 4 5 6 7
Car rental on OrangeSmile.com

Photogallery of cultural heritage of Larisa

Excursions over cultural sights of neighbours of Larisa

Thessalia Region
Be sure to visit Lake Plastiras, it is an artificial lake, which is small, but remarkably beautiful. One more place to go is the National Marine Park of Alonnisos. Besides the sea area, the park includes the island of Alonnisos, six smaller islands, as well as 22 uninhabited islets and rocky outcrops. Here you can see rare species of animals and birds, the most ... Open »
Skiathos Island
The second castle on the island is Kastro. It is well preserved now. The building has a strategically advantageous position. It is located on the top of the rock. In the case of pirate raids, all of the wooden ladders were taken away in order to protect the settlement. In spite of its small size, there were three hundred houses and twenty churches behind the walls of Kastro. ... Open »
Skiathos
An important historical object is the monastery of Evangelistria. In 1807, in its walls there was a significant event - the contemporary Greek flag was raised for the first time. In the north-western part of the island there is Kehriysky monastery; it is considered one of the most secluded and beautiful ones. The Monastery of the Kunistra Virgin would appeal to fans of ... Open »
Thessaloniki
The fist settlement on the territory of the modern city of Thessaloniki was established as far back as in prehistoric age. This fact is proven with archeological findings of current digs. The Archeological Museum of Thessaloniki offers its guests a priceless collection of showpieces aged several thousand years. The main showpieces of its collection are considered to be the ... Open »
Skopelos Island
You should start your acquaintance with Skopelos from its capital, Skopelos Town. You can admire the ruins of the ancient fortress Kastro here. It was built by the Byzantines in the Middle Ages in order to protect the settlement from the pirate raids. The fortress was raised in the place where the ancient acropolis situated. You can still see some of its parts. The oldest cult ... Open »
Alonissos Island
There is a huge barrel for wine, patitiri, in the port. Local inhabitants gave a humorous name to their settlement. There is an information dissemination centre not far from the monument. It is dedicated to the life of rare monk seals which live in the waters of Alonissos. You can visit the centre for free and explore photos, models, slides and text information about these ... Open »

Culture guide to Larisa. Which fascinating sights to visit once you are in Larisa: temples, churches, museums, theaters and castles. Recommendations (with addresses, phone numbers and links) on the places 'must visit' in Larisa. Plan your own city excursion by using this page info!