Detailed hi-res maps of Bolzano for download or print 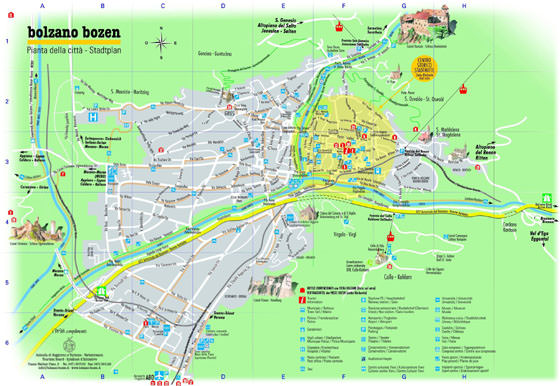 Search for services, infrastructure and sights on map of Bolzano

Our guide chapters over Bolzano

A ride in Cable car Colle is a very interesting experience as this is the first passenger cable car in the world. It started working in June 1908 and was invented by Josef Staffler, a Bolzano native, who saw a great potential in this type of transport. Naturally, the Cable car Colle was renovated, but visitors can still see the original cars at the top, near the station. Renon, which connects Bolzano and … Open

All fans of burgers will be pleased with Stars. At a glance, it may seem that this is another fast food restaurant, but some famous names stand behind it, including Michelin-starred chef Theodor Flaser. Only finest locally sourced food is used in the burgers, such as local beef that is minced two times a day. Bread is long-risen, all sauces are home-made, and vegetables are provided by local farmers. Even soft … Open

Traditions and mentality of Bolzano

The second half of July is the time for Bolzano Dance. This two-week-long event is all about dancing and its different aspects. It’s a great way to get acquainted with the European dance scene. The festival is both entertaining and educational because there are not only dance shows by professional artists but also dancing courses, interesting workshops, and meetings. Hip-hop, flamenco, Latin jazz, classical … Open

In the immediate vicinity of Bolzano is the Roncole castle, it was built in the first half of the 13th century. The main value of the old castle is considered to be medieval frescoes, which show various scenes from the life of the court. In 2000, the castle was completely renovated, now guided tours are held there regularly.  Among the religious sites Franciscan monastery should definitely be noted, it was built … Open