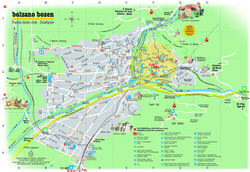 Interactive maps of hiking and biking routes around Bolzano

1. You can zoom in/out using your mouse wheel, as well as move the map of Bolzano with your mouse.
2. This interactive map presents two modes: 'Biking Routes' and 'Hiking Routes'. Use the '+' button on the map to switch between them.

This Bolzano map has two modes: 'Railway Network' and 'Landscape & Rural Map'. Use the '+' button on the map to navigate.

Our guide to Bolzano

Enthusiasts of fashion can look for new extravagant outfits in Oberrauch Zitt store, which is one of the most fashionable and expensive stores in the city. This store is characterized by exquisite design. Its spacious showcases has mannequins with carefully selected sets of clothes and accessories on. The prices are rather high, but there are always many customers. Everyone who expects to bring unique works of … Open

Hotels with history of Bolzano

Another picturesque villa dating back to the early 20th century houses Apartments Villa Anita. It provides guests with fully equipped apartments; each room has its own unique feature. A mansard ceiling has been preserved in one of the rooms, while another one has original wooden supports and ceilings. The interior is complemented by restored antique furniture, old floor vases, and other vintage accessories that … Open

The list of the most romantic and attractive hotels in Bolzano is not complete without Il Battente 1862, the only luxury suite of which is housed in a beautiful 18th-century building. The suite that presents an interesting collection of paintings is decorated with restored antique furniture and vintage-style accessories. Hotel guests are offered to start the day with a delicious Italian breakfast, which includes … Open

Those fond of taking walks will surely enjoy Bolzano; one of the most beautiful streets of the city is considered to be Via dei Portici. On this historic street there are lots of unique buildings, decorated stucco mouldings, today many historical buildings feature interesting shops. Each of the buildings located on the street has its particular features, the search for which is one of the tourists’ favourite … Open