Detailed hi-res maps of Ischgl for download or print 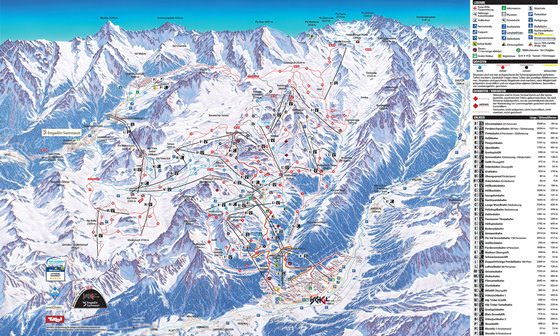 The actual dimensions of the Ischgl map are 2560 X 1538 pixels, file size (in bytes) - 1753874. You can open this downloadable and printable map of Ischgl by clicking on the map itself or via this link: Open the map.

City tours, excursions and tickets in Ischgl and surroundings

Search for services, infrastructure and sights on map of Ischgl

Our guide chapters over Ischgl

Mountain passes and depressions can be an unpleasant surprise for all tourists who visit Ischgl for the first time. They are marked on the map but it may be not easy to see them in person because many of these “hidden traps” are covered with a thick layer of snow. That being said, tourists will surely not find overcrowded ski trails and long lines of vacationers waiting for their turn near ski lifts. Are you an … Open

Maps of Sankt Moritz
A different festival that music fans will find interesting takes place at the end of March. It is held especially for the lovers of club music and called St. Moritz Music Summit. This is one more festival with many scenes around the entire city. It is reasonable because of the extensive program and the huge amount of participants and visitors to the festival. Many of the ... Open »
Maps of Innsbruck
If you are the music fan, especially when it comes to the classical music of the Baroque or Renaissance epochs - then you must book the tickets to Innsbruck for summer. The Innsbruck Festival of Early Music is the international event, as well as oldest one dedicated to musical masterpieces of the 16th and 17th centuries. Every summer, music fans arrive at the capital of the ... Open »
Maps of Bolzano
Charming wooden stalls appear on the streets of the city, and local sellers offer pastries, souvenirs, and Christmas decorations. For tourists, it’s a great place to purchase authentic souvenirs, such as woolen shoes for home, as well as handicrafts made of wood and glass. National food is an essential part of such fairs – there are always many sellers that offer culinary ... Open »
Maps of Konstanz
In the middle or end of February, Karneval und Fasching is traditionally held in Konstanz. At this time, such words as “Huhuhu”, “Narri Narro”, “Ho Narro” and “Juhu” are heard everywhere on the central streets - they are shouted by locals dressed up in interesting costumes sewn especially for the holiday. Public festivities, colorful processions, a gastronomic ... Open »
Maps of Winterthur
The city's most long-awaited fair opens in early December. Of course, we're talking about Winterthurer Weihnachtsmarkt. It is held in Neumarkt, starting at the beginning of December and closing just before Christmas. It must be said that this is definitely one of the best fairs in all of Switzerland, during which the sense of time and space is lost - you will forget where the ... Open »
OrangeSmile.com - online travel reservation expert providing reliable car rental and hotel booking services. We feature more than 25.000 destinations with 12.000 rental offices and 200.000 hotels worldwide.
Secure Server