Detailed hi-res maps of Arabba for download or print 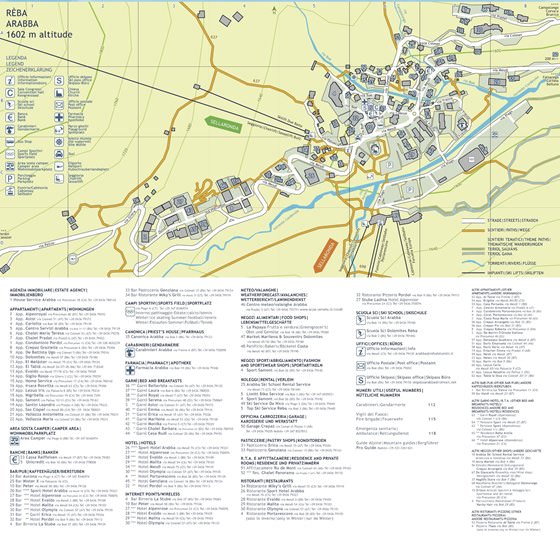 Search for services, infrastructure and sights on map of Arabba

Our guide chapters over Arabba

Do not miss an opportunity to visit Centro Storico Canazei, a historic site on the outskirts of Arabba. This site is situated in the heart of the old settlement of Canazei. Gorgeous old buildings are the main treasure of this area. They are fully made from wood and decorated with skillful carving, artistic paintings, and other incredible elements of décor. In summer, pots with blooming flowers always decorate the … Open

Lago di Fedaia is a lake of exceptional beauty that has become a popular local attraction. A dam was built on the river in the 50s of the previous century, causing a formation of a large water reservoir. The area is almost entirely open for visitors. Tourists can take a stroll along the dam and relax near the water reservoir after that. They can also enjoy a stroll to the nearby pine forests at any moment. … Open

Sport Samont is one of the best sportswear shops in Arabba. It offers a broad range of clothing for the whole family. This is a great shop for everyone who likes sports style and comfortable clothing. Visitors can buy colorful t-shits and hoodies all year round here. In winter, the shop offers high-quality puffers and one-piece jumpsuits. The variety of sportswear is also very pleasing. By the way, this shop offers … Open

The 15th century marked the start of Roman dominance in the region. Unfortunately, this didn’t make local people happier. Long isolation from the outer world caused misery and disasters. Constant conflicts between Austrian and Italian monarchies made life only more complicated for the Arabba. Each of the monarchies wanted to make this beautiful land rich in resources their own. World War II also brought much … Open

Maps of Bolzano
The second half of July is the time for Bolzano Dance. This two-week-long event is all about dancing and its different aspects. It’s a great way to get acquainted with the European dance scene. The festival is both entertaining and educational because there are not only dance shows by professional artists but also dancing courses, interesting workshops, and meetings. ... Open »
Maps of Veneto
Venice Carnival starts in late January and lasts for more than two weeks; it is one of the most beautiful and interesting events in the world. According to historical records, the first carnivals has been held in the 11th century; at that time the holiday has been focused primarily on the lower strata of society. Ordinary people were resting and having fun; colorful masks ... Open »
Maps of Innsbruck
If you are the music fan, especially when it comes to the classical music of the Baroque or Renaissance epochs - then you must book the tickets to Innsbruck for summer. The Innsbruck Festival of Early Music is the international event, as well as oldest one dedicated to musical masterpieces of the 16th and 17th centuries. Every summer, music fans arrive at the capital of the ... Open »
Maps of Vicenza
On September 8, the central streets of the city are decorated with flowers, and people in colorful clothes are walking all around. This is how people in Vicenza celebrate the feast of the patron saint of the city (Festa della Madonna di Monte Berico). Despite the fact that the holiday is of religious origin, everyone is having fun. A special program for children is prepared ... Open »
Maps of Venice
The most famous and anticipated event is the Venice Carnival. Millions of tourists come here to witness this grand spectacle and even participate in it. In the 18th century, the carnival started in October and lasted for six months. People put on masks and dissolved in their own vices. Participants enjoyed variously costumed processions, concerts, and magnificent ball ... Open »
OrangeSmile.com - online travel reservation expert providing reliable car rental and hotel booking services. We feature more than 25.000 destinations with 12.000 rental offices and 200.000 hotels worldwide.
Secure Server