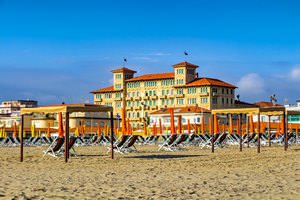 Every year Viareggio hosts a beautiful carnival, which is considered one of the most daring and unforgettable holidays in Italy. For the first time the celebration was organized in 1873. At that time representatives of the local aristocracy decided to make a beautiful parade. Fabulous luxury carriages drove through the streets of the city, and local poor people took the advantage of the opportunity, dressed up in costumes and started making fun of local politicians and noble people.
Cuisine of Viareggio for gourmet with top restaurants and cafe
Rest in restaurants of Viareggio will be liked not only by fans of Tuscan cuisine, but also by fans of various culinary traditions. Romano restaurant provides its visitors with large choice …

Open
In the memory of that brilliant event was organized a parade of carts in Viareggio, which has been celebrated till our days. As a rule, figures of famous politicians and stars are put in these carts. For many years Burlamacco has remained the main symbol of the holiday. The author of the fantastic character is a famous Italian painter Uberto Bonetti. Burlamacco appeared in the festival for the first time back in 1930. The face of the hero is hidden by a colorful mask, which has become the main emblem of the festival. The name of the fantastic character is connected with several interesting legends.
For example, according to one version he was named in honor of the city's main channel of Burlamacco, which crosses entire Viareggio and is considered one of its major attractions. According to another version, the character was named after a famous literary character Buffalmacco, which is also characterized by a witty and daring character. According to the third version, Burlamacco is the pseudonym of the artist as he used this name to sign his paintings and cartoons created for local comic magazines. Copyright www.orangesmile.com
Excursion over cultural sights of Viareggio - 'must visit' points of interest
Viareggio is rich in architectural and historical monuments. All most important excursion sites are located in the historic district of the city. Here vacationers should visit St. Andrew …

Open
The carnival is always accompanied by various interesting events. In addition to a parade of chariots the squares of the city host interesting humorous presentations, children's performances and entertaining competitions. On the day of celebration here are opened numerous souvenir shops where visitors can buy beautiful carnival masks, costumes and souvenirs. The carnival traditionally attracts a large number of foreign tourists who come there in order to get acquainted with local culture and customs. 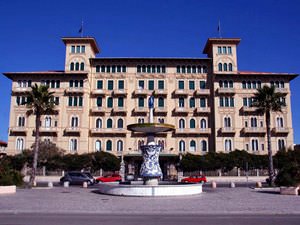 The celebration is traditionally accompanied by colorful fairs, where visitors can try delicious food and buy interesting handicrafts made by local artisans. On the day of the carnival you can small cozy cafes simply everywhere. They lure visitors with aroma of sweets and pastries. The celebration is especially liked by children who are delighted with huge choice of sweets and toys.
Your active city break in Viareggio. Attractions, recreation and entertainment - best places to spend your day and night here
Viareggio is a great city for active recreation. Here you can enjoy all kinds of water entertainment, including cruises (Vela Mare SSD, Consorzio Marittimo Turistico 5 Terre, Tourist Fun …

Open
Residents of the city with a beautiful name of Viareggio can in no way be reproached for being reserved or impolite. Used to the influx of tourists, they are always ready to help or share some tips if travelers are in trouble. Their most attractive features are emotionality and openness. Of course, the main value is the family, and especially mothers, they are treated with special respect here. It is customary to indulge children, and therefore there are no Italians dissatisfied with their life - it's not easy to meet such a pessimistic person. 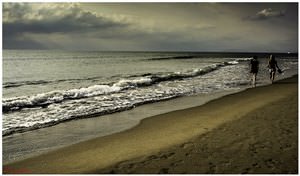 Everybody knows about the special attitude of Italians towards food, and Viareggio is no exception in this regard. Any meal is equivalent to a kind of feast, and after such a colorful festival people need some rest (we're talking about an afternoon siesta, which can last up to 5:00 pm). This fact should be taken into account by anyone who wants to go to a grocery store or any other institution at this time. In this case, do not waste your time in vain - just try to learn such a relaxed attitude to life from locals.
Advices to travellers: what you should know while being in Viareggio
1. Fans of shopping should pay attention to leather goods and clothing made by local manufacturers, as well as utensils and home decorations made of crystal and china. Purchasing clothing … 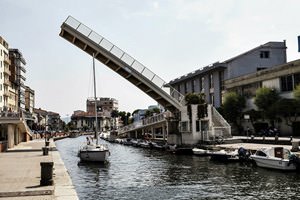 In early August, visitors to Viareggio can witness the Sea Sound Music Festival. The event takes place in Cittadella del Carnevale di Viareggio. Thus, the event is closely connected with the famous previously mentioned carnival. And this is a kind of its continuation - because this is 12 hours of music, confetti, dance shows, comedy performances - in short, all the entertainment you can imagine and everything associated with the famous carnival. Traditionally, the entire arena will be animated, and DJs won't let anyone get bored. The event is organized through crowdfunding.
Viareggio design-hotels for stylish travellers
On the lively promenade of Viareggio is situated the modern Hotel Eden. It boasts of a very attractive and harmonious design. Its spacious hall is equipped with a very agreeable lighting …

Open
In mid-October, gourmets gather in the central city streets to join the Original Truck Food Festival Viareggio. At this time, everyone who is particularly fond of food has a chance to taste the best dishes presented at the festival. The main action takes place on Terrazza della Repubblica. This is not only a rich gastronomic program but also such entertainment as music that sounds from everywhere inviting people to join the significant event. 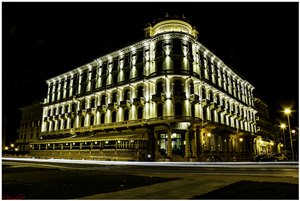 In early September, the city hosts Versilia Sport Summer Festival - at this time you can watch sports competitions in football, beach rugby, and volleyball. Hundreds of enthusiasts and athletes come here from all over Europe to show their skills in Stadio dei Pini and Darsena Viareggio arena. The event is very multifaceted and attracts hundreds of people wishing to watch interesting competitions and, of course, cheer up for their “favorites”, because at the moment of the competition they need support more than ever.
Top places to stay in Viareggio - most luxurious hotels
Viareggio is prepared to offer quite a decent collection of hotels to tourists who prefer to stay in the most luxurious and expensive establishments when it comes to hospitality. In the very …

Open
Another must-visit musical event is Festival Pucciniano. It is held at the end of August in Torre del Lago, a town located near Viareggio. At its time, you can listen to classical works (operas, operettas) of the great composer performed by talented and famous musicians and orchestras. The event is definitely worth the attention of all those passionate about this genre and looking for some romance. The atmosphere of the festival is just what they need. The most famous musical works - “Madame Butterfly”, “Tosca”, “La Boheme” are also included.

This guide to traditions and festivals in Viareggio is protected by the copyright law. You can re-publish this content with mandatory attribution: direct and active hyperlink to www.orangesmile.com.
Viareggio - guide chapters 1 2 3 4 5 6 7 8 9 10 11 12

Cathedrals and basilicas near Viareggio
♥   Basilica di S. Paolino, Viareggio, 1.1 km from the center. On the map

Survived castles around Viareggio
♥   Castle 'Matilde Tower' Viareggio, 1.6 km from the center. On the map

♥   Castle 'Pietrasanta Fortress and "Rocca di Sala"' Pietrasanta, 10.4 km from the center. On the map

Colors of Viareggio in photos

Traditions and festivals in cities around Viareggio

Pisa
One of the newest and most engaging holidays in Pisa is considered to be the Gioco del Ponte (its name means “games on a bridge”) offering its participants the most exciting sport contests and competitions. According to one of the theories the holiday originated from the Middle Ages epoch when local equestrians organized fights named Mazzascudo, entertaining themselves and ... Open »
Livorno
La Festa dell'Uva, the grape harvest festival, is also held in autumn. This one offers guests a very rich program, they can walk through the picturesque Tuscan vineyards and taste the best young wines. All Livorno's gastronomic festivals without exception are accompanied by lush public festivities. Bright carnivals and solemn processions pass through the central streets where ... Open »
Tuscany
August is associated with Sagra culinary festivals, which are held in various cities of Tuscany and are well-known to gourmets from around the world. It is noteworthy that every year the festival is dedicated to a particular dish; best Tuscan chefs compete to cook the best of it. During the festival, guests are offered not only to taste delicious national food, but also to ... Open »
Florence
When it comes to describing work and business, they also have their own national characteristics. Informal communication is very common among the local people, so even a serious business meeting can be arranged in a restaurant or at home of one of the business partners. Businessmen believe that this form of communication makes it easier to establish contact and understanding ... Open »
Emilia-Romagna Region
It is common here to live for those small things that make you happy. It is important for them to spend time with their family, meet with friends and relatives. Hardly anyone will sacrifice those moments to go to work. They tend to pamper themselves – with delicious desserts, excellent coffee, great dinners. The family is very important for the Italians, and traditional ... Open »
Modena
During the festival, special outdoor restaurants are open in the city. In the evenings, visitors can have romantic candlelight dinner. During daytime, you can visit fairs and market stalls where local wineries and farms offer their best products. Also, the guests of the festival have an opportunity to take exciting tours. They can visit famous wineries, walk along beautiful ... Open »

Cityguide on traditions, mentality and lifestyle of people in Viareggio. Learn the best periods to visit Viareggio to discover its soul - authentic festivals, events and celebrations. We will also reveal the interesting habits, attitude towards the world and to tourists in Viareggio.