Detailed hi-res maps of Viareggio for download or print 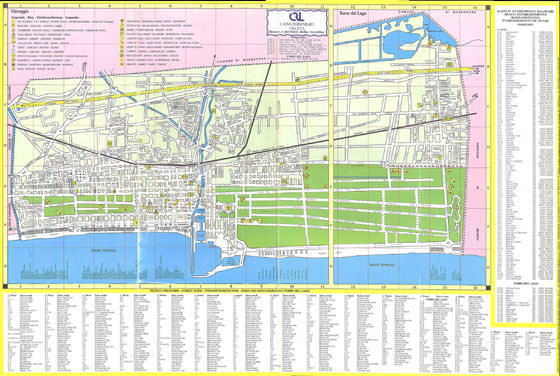 Search for services, infrastructure and sights on map of Viareggio

Our guide chapters over Viareggio

Viareggio for children - what to visit

The beach Bagno Teresa is equally attractive. It is a real center of family leisure. In addition to the comfortable beach, there is a beautiful park zone with green terraces on which playgrounds for kids are equipped. On the beach, there is an excellent restaurant, and for an additional fee, travelers can access the recreation area with swimming pools and spacious terraces. The beach is very well maintained and … Open

Hotel Nice stands out thanks to its very nice and romantic design. It offers guests eight uniquely beautified rooms to choose from. Each of the rooms has a large bed and simple wooden furniture. A chic drapery made with bright fabrics gives the hotel a special feeling. The beds are made with exquisite bright colored pastel linen and decorated with satin pillows. The windows in the rooms have very light translucent … Open

Guests of Viareggio will have an opportunity to visit the largest outlet of Tuscany, The Mall. You can get everything you need to create a new image here. There are dozens of clothing stores for every taste, and there are also pavilions with accessories and perfumery. The outlet is sure to please those who prefer clothes and accessories of world famous brands. It has a large Armani pavilion and a Dior store. For the … Open

Hotels with history of Viareggio

The opportunity to enjoy a vacation in a historical setting is available not only to wealthy travelers but also to economical tourists. This is possible at the hotel Ena B&B which offers its services to everyone. The building in which the hotel is located was carefully reconstructed. However, its stone stairs and original ceilings were preserved, and wooden shutters were restored on the windows. The hotel has four … Open

8. Smoking in public places is prohibited in Viareggio. However, there is usually a special area for smoking next to each state agency and trading center. Local restaurants also usually have separate rooms for smokers and non-smoking visitors. 9. The city is very convenient to travel on foot. This way you can see all of its sights and visit the most beautiful places of Viareggio. The city is … Open

Viareggio museums is another niche that is worth exploring. Those who prefer to admire wonderful artworks for hours will surely appreciate Centro Matteucci, while fans of marine themes and people who want to learn about shipbuilding must visit Museo Della Marineria Alberto Gianni. Those looking for contemporary art exhibitions should not pass by Galleria d'Arte Moderna e Contemporanea Lorenzo Viani, Sketches Museum … Open