Detailed hi-res maps of Livorno for download or print 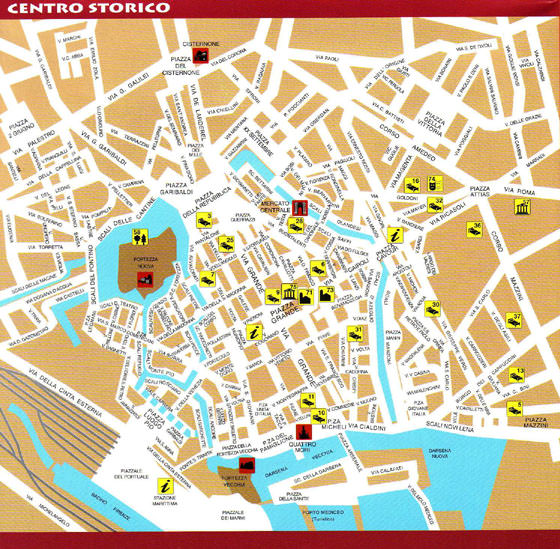 Search for services, infrastructure and sights on map of Livorno

Our guide chapters over Livorno

Rotini Art Gallery will appeal to those who prefer buying works of art as souvenirs. The gallery is housed in a very beautiful historic building and sells wonderful landscape paintings and paintings depicting famous local attractions. This store sells both miniature paintings ideal for budget tourists and canvases of impressive size for well-to-do travelers. Another popular souvenir shop, Papaveri Di Mare, has … Open

8. Locals keep observing the tradition of siesta. In the afternoon, most restaurants, shops and various institutions close for a long break. Only large stores and restaurants located in the city center don't stop working at this time. 9. Thrifty tourists should definitely pay attention to local bakeries and pizzerias. Here you can always buy fresh pastries at very affordable prices. 10. The city has a lot … Open

Livorno for children - what to visit

Breeze Beach is a popular destination among outdoor enthusiasts and vacationers with children. This is a very beautiful and comfortable beach where guests will be offered a lot of interesting entertainment and special treats. During the day, the beach is an excellent place for family rest. With the onset of darkness, it turns into a huge colorful disco. Among the city museums most interesting for family visits, … Open

Fans of unusual excursions will be offered a trip to the miniature Island Meloria. The main and only attraction of this Island is the old lighthouse tower. This bulk islet is divided with the coast of Livorno, by about 7 kilometers. In 1709 it was decided to build a new lighthouse, which later became an indispensable guide for seafarers. The ancient tower is perfectly preserved, despite the fact that it has … Open

Traditions and mentality of Livorno

In the autumn, the thematic mushroom festival La Sagra del Fungo takes up the baton. Tuscany is rich in lush forests where locals pick up rare and incredibly delicious mushrooms. With the onset of autumn, tourists are offered original activities such as truffle hunting. Locals use specially trained dogs to search for the most expensive mushrooms in the world. Festival guests will have the opportunity to stroll … Open

Classic Italian pizzerias are also widespread, and Pizzeria da Matilde is a very attractive one. It attracts tourists with affordable prices, here you can try dozens of types of pizza, fresh salads, original desserts, and other common treats. Most of the dishes can be ordered for takeaway, which is good for independent tourists. This pizzeria is very popular among visitors with kids. Biancazerozero restaurant … Open