Video of flights over top monuments of Athens in HD format.
Use 'Full Screen' mode.
This review is a great opportunity to look at architectural landmarks of Athens from a new perspective – namely, from the sky. Click the video to enjoy a 3D flight over the architectural ensemble of Athens and to look at the most interesting landmarks in detail - at Parthenon, Erechtheion, Cathedral of Athens, Arch of Hadrian, Temple of Olympian Zeus and many others. Below you will find the most amusing historic facts and professional photographs of every famous sightseeing in Athens. 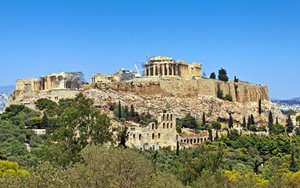 Facts:
» Parthenon is the main temple in the ancient city of Athens, which was dedicated to the patroness of the city, the goddess Athena. The Parthenon is located in the Athenian Acropolis.
» The temple was built in the years 447-438 BC. Today the temple is in dilapidated condition, but there is ongoing restoration work.
» Although the temple seems perfectly square-cut, there are almost no straight lines in its contour, and the columns of the temple aren’t placed perpendicular, but angle-wise, bending inward.
» The temple is framed by columns; there are 46 of them, including 8 pieces of front sides and 17 pieces on side facades. Front space is decorated with lots of sculptures, many of which were stolen during the existence of the temple and the numerous wars.
» Today the ruins of the temple are of white color; years ago pediments of the temple were painted in red, and frieze was blue. This colourful background made the marble sculpture to look bright white; details were gold-plated or made of gilded bronze. 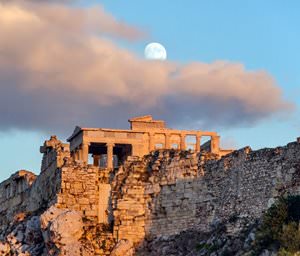 Facts:
» Erechtheion is one of the main temples of ancient Athens situated in the Acropolis. The construction of the temple dates back to 421-406 BC.
» Erechtheion is dedicated to Athena, Poseidon and the legendary Athenian king Erechtheus.
» The temple has an unusual asymmetric plan caused by significant drop in height of the soil because of two inner sanctuaries. The temple has two entrances, north and east.
» The eastern part of the temple, which is a little higher, was dedicated to Athena.
» The western part of the temple was dedicated to Poseidon and Erechtheus.
» On the south side of the temple there is the famous Porch of Caryatids owing its name to six 2.1-meter statues of women, which replaced columns supporting the architrave. 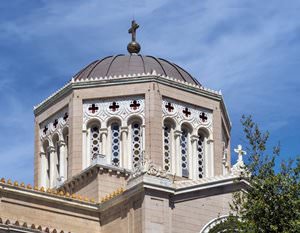 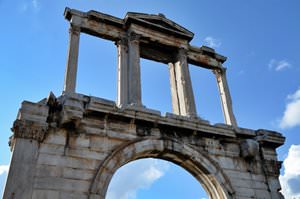 Facts:
» The Arch of Hadrian is the triumphal arch built in 131AD in honor of the Emperor Hadrian.
» The height of the arch is 18 meters.
» Two inscriptions can be seen on the arch. One inscription on the part of the acropolis, says, "This is Athens, the ancient city of Theseus", and on the opposite side facing the Adrianople has the inscription, "This is the city of Hadrian, and not of Theseus."
» The arch was built without cement or mortar, entirely of marble quarried on the nearby Mount Pentelikon using clamps to connect stones. 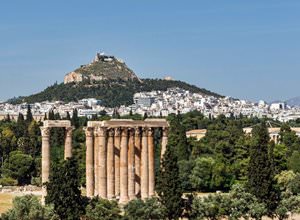 Facts:
» The Temple of Olympian Zeus is the largest temple in Greece.
» The length of the temple was 96 meters and the width was 40 meters.
» Construction of the temple began in the 6th century BC and ended only in the 2nd century BC.
» The temple had 104 17-meter towers, but only 15 of them have survived to this day. Sixteenth columns fell to the ground during a storm in 1852 and still lie there.
» The first temple was excavated in 1889-1896; further work was carried out by German and Greek archaeologists. Today the ruins of the temple are hardly the main historical attractions of Athens. 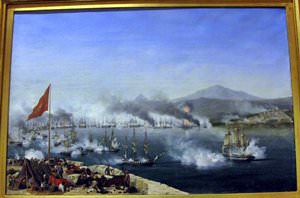 Facts:
» Construction of the National History Museum of Greece was completed in 1871.
» The Greek Parliament occupied the museum in the period from 1875 to 1932, and therefore the building is now often referred to as the Old Greek parliament.
» The museum houses a collection of the Historical Society of Greece. The exhibition includes items relating to the period from the fall of Constantinople in 1453 to World War II.
» Particular attention is given to Greek revolution and the further development of the modern Greek state.
» The museum features weapons, and personal memorabilia of famous historical figures, historical paintings by Greek and foreign artists, manuscripts, as well as a large collection of traditional costumes from different regions of Greece. 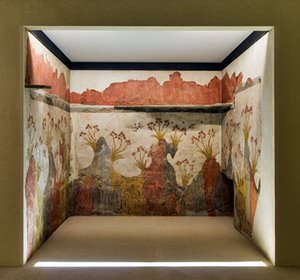 Facts:
» The National Archaeological Museum of Athens is the largest and one of the most interesting museums in Greece.
» Its permanent exhibition consists of more than 20 thousand items of different eras; its collection of ceramics and sculptures is considered one of the richest in the world.
» The museum's prehistory collection include vessels, figurines, ornaments, tools and weapons made of clay, stone and bone. These findings date back to 6800-3300 BC. In addition, there are museum exhibits of the Early and Middle Bronze Age.
» The collection of objects found during archaeological work on the island of Santorini, in particular in excavations of the ancient city of Akrotiri on Thera Island, is notable; the city was destroyed during an eruption of the volcano in the 14 century BC.
» The collection of sculptures includes single statues, sculptural groups, sarcophagi, busts and altars found in Greece and dating back to different historical epochs.
» The bronze collection includes statues, weapons, jewelry, pottery, working pieces, religious and funerary objects.

Facts: » Lycabettus Theater is the open air venue that is the most popular music scene of Athens.
» Lycabettus Theatre was built in 1965 on the initiative of outstanding Greek drama actress and politician Anna Sinodinu.
» The theater was built in an abandoned quarry on the model of ancient buildings; it could serve 3,000 spectators.
» Lycabettus Theatre was built on the hill of the same name proudly towering over the capital of Greece and offering wonderful view of the city.
» In summer the theater hosts concerts and theatrical performances, as well as many events of Greek and foreign artisans.

Build your walking routes in Athens on the landmark map 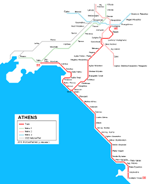 Architectural landmarks in the regions around Athens

Thessaloniki
The White Tower is located on a waterfront. It has a museum now. There are multimedia exhibitions with illustrations and sound design. There used to be an outpost here. It dated back to the 12th century. Later, Turks fortified the building for it to protect the harbor. The Ottoman rulers dealt with undesirables here. Kuli Blanka resembles a cylinder, is 34 meters high and 23 meters in diameter. Having studied the history of ... Open »
Sofia
The St. Alexander Nevsky Cathedral is a cathedral dedicated to Russian soldiers who freed Bulgaria of the Turkish yoke. The cathedral was built by patriots of Bessarabia, Dobrudzha, Austria, and Russia. In 1882, the first stone was laid. The construction lasted from 1904 to 1912. It had been named after Saint Cyrill and Methodius until 1920. The cathedral was declared a cultural monument only in 1924. The building was designed by Russian ... Open »
Istanbul
Sultan Ahmed Mosque is the largest and one of the most beautiful mosques of Istanbul. The name ‘Blue Mosque’ it owes to a huge variety of blue and white ceramic tiles used in interior decoration. Construction of the mosque has being carried out for 7 years and was completed in 1616. The most unusual part of the Blue Mosque is a niche for prayers carved from a huge piece of marble with a black stone, which was brought here from Mecca. The ... Open »
Dubrovnik
Dubrovnik is famous for its shield in the form of 2-kilometer fortress walls. The complex is located on the rocky bank. There are additional fortifications in some places. Starting from the historic center, the walls create a circle and turn the city into an impregnable fortress. The fortification was constructed in the 10th century. The limestone walls have been repainted many times for the last centuries. They gained their current appearance ... Open »
Bucharest
The Palace of the Parliament was built at the time of the Socialist Republic of Romania. It is one of the most famous architectural monument in Bucharest. The Palace is considered as the biggest civil and administrative building in the world and the largest parliament building. The total area of the Palace is 270x240 m. The building is 86 m high. The underground part of the Palace is at a depth of 92 m. In the building, there are 1 100 ... Open »
OrangeSmile.com - online travel reservation expert providing reliable car rental and hotel booking services. We feature more than 25.000 destinations with 12.000 rental offices and 200.000 hotels worldwide.
Secure Server