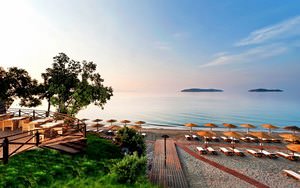 On the Sporades, as in the rest of Greece, it's best to get acquainted with the local cuisine where you see a large number of Greek clients. Local catering establishments are called "taverns". Service here is often not as fast as in most tourist-oriented European institutions but much more sincere. It is understandable because a tavern for a Greeks is not just a place where you can eat but also a real leisure center. In the evening, almost all the taverns are packed, and not because the Greeks do not like to cook at home. It's just customary here to spend time eating and talking in a pleasant company.
Authentic traditions, festivals and lifestyle of Sporades Island inhabitants
The Greeks are very proud of the fact that they are heirs of the ancient Hellenes. They respect their country, despite the love of criticism of their own government and the decisions it …

Open
If you want to win the waiters in a tavern, then try to place an order in Greek. Even if you speak it badly, the Greeks still appreciate the attempts of travelers to learn the local language. The name of the tavern, by the way, may differ here depending on what ingredients are used for cooking. In psarotaverna, for example, they almost exclusively serve fish and seafood courses. As a rule, they are located near the sea and, naturally, are very common in the Sporades.
They serve not only fried, baked, pickled, stewed, and stuffed fish. In a local psarotaverna, you can find baked on charcoal squid with cheese, grilled shrimp, and lobster with spaghetti. Mussels and oysters are also very popular here. Local people sometimes eat them raw, with only lemon juice. Among the meat dishes, you should definitely try souvlaki. These are small shish kebabs on wooden skewers, traditionally from pork, but recently in favor of tourists there appeared to be chicken and fish variations. Souvlaki for the Greeks is an analog of fast food, you can find this dish in any diner. If you put souvlaki with tomato, onions, and tzatziki sauce in a pita, you get another traditional dish for a quick snack – gyro. Copyright www.orangesmile.com
Excursion over cultural sights of Sporades Island - 'must visit' points of interest
The Northern Sporades are distinguished by the presence of a very large number of various temples and churches. On the archipelago, for example, there is the church of St. John, more known …

Open
Moussaka is also tasty. This dish, in fact, is a casserole of eggplant and meat with the addition of various ingredients. There is no single recipe, so you can easily order this dish in different taverns for comparison. It is also worth trying paedaki, mutton ribs, fried on coals. Arni kleftiko is suitable for those who love stew lamb with vegetables. If in the name of the dish you see the word "arni", it means it includes mutton meat. 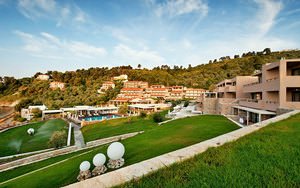 Be sure to try the horiatiki, aka "Greek salad", which in Greece is always called "home", or "village" salad. They make it with onions, peppers, tomatoes, cucumbers, olives, olive oil, and much more. Each tavern has its own way of cooking horiatiki. You can also try caftedes, small meatballs from eggplant, with zucchini, tomatoes, and mushrooms. Melitzana psitti, beside baked eggplant, also includes feta cheese and tomato.
Your active city break in Sporades Island. Attractions, recreation and entertainment - best places to spend your day and night here
On the island of Skopelos, it is worth visiting the factory for the production of olive oil. Nowhere else they will tell you so detailed and interesting about this product. Speleologists, …

Open
Fans of desserts should not miss the local 10% fat yoghurt and baklava. Among alcoholic beverages, be sure to try the retsina, white or pink wine with an unusual aftertaste. Retsina is served chilled, and it is necessary to look for it in the stores not on shelves among wines but in the refrigerators among beer. Moschato, Nemea, Rapsani, Robola, Savatiano – these are just a few varieties of local wines that deserve your attention. Among stronger liquors, you should pay attention to Metaxa, a strong mixture of cognac and brandy, as well as anis vodka ouzo and grape vodka rakia. From soft drinks, coffee and juice are popular on the islands. Though, you can’t say the same about tea – you can find it only in pharmacies as a remedy for cold.

This guide to cuisine and restauraunt in Sporades Island is protected by the copyright law. You can re-publish this content with mandatory attribution: direct and active hyperlink to www.orangesmile.com.
Sporades Island - guide chapters 1 2 3 4 5 6 7 8 9

Favorite desserts in Greece are melomakarona, which are cookies with honey, and loukoumades. Latter are deep-fried donuts with cinnamon. Loukoumades are often a part of the breakfast for those who like to start the day with sweets. To quench thirst in Greece, you can drink a local kind of coffee, frappe, which is served with ice. Among the drinks of Greece, wine is the most popular. Wine-making in this country originated thousands of years ago. The most popular wines are Retsina, Moshato, and Robola. Another famous Greek drink is Metaxa, which is a sort of brandy. Locals also produce their own aniseed vodka, Ouzo, and grape vodka, Raki. No feast in Greece can go without water and bread on the table. These are the obligatory attributes of both a gala dinner and an ordinary meal. … Open

Searching where to eat - restaurants and cafe on Sporades Island map

Cuisine and restaurants in the neighbours of Sporades Island

Alonissos Island
Do you love soups? Then try chickpea revithia, which was known in ancient Greece or kakavia, a local fish soup. The best fish dishes can be found in psarotaverns of Alonissos. Mussel salad, stewed octopus and taramasalata are only a small part of seafood dishes on the island. Moreover, you can bring fresh fish to a tavern and ask to cook it at a reasonable price. Be careful ... Open »
Skopelos Island
The best fish and seafood dishes can be found in psarotaverns near the shore. Moreover, you can bring your catch and ask to cook it for a reasonable price. There is a wide choice of fish dishes on Skopelos: from fried gilt-head bream to grilled sea bass, stewed octopus and taramasalata. Be careful when ordering a dish. There can be «*», «k» or «kat» indications in front ... Open »
Skiathos
It offers a magnificent terrace surrounded by hedges; in evenings, there is always live music here. Porta Rossa is a perfect place for a romantic dinner. The Agnadio restaurant serving Greek cuisine is also an interesting dining place. Each of its dishes has unique decoration; the restaurant will easily cater both discerning gourmets and budget travelers. Specialties of ... Open »
Skiathos Island
There are many delicious soups on Skiathos. Fasolada is a traditional Greek soup, which was known in ancient times. Kakavia is a fish soup. Vegetarians will definitely like chickpea revithia. True gourmets should try creamy chicken avgolemono. The best fish dishes can be found in psarotaverns near the shore. You can bring your catch here and ask to cook it for a reasonable ... Open »
Evvoia Island
The travelers can be advised to get acquainted with the traditions of Evvoia cuisine not in the cafes or restaurants, but in taverns. A tavern for a Greek is not just a place to eat. The regulars come here to discuss news with the owner and talk to each other, have a pleasant evening in a nice company with some local music. That is why in taverns they use the traditional ... Open »
Athens
Seafood lovers will surely like the restaurant named Garbi. Its menu features more than a hundred of exclusive dishes. Salads with lobster and shrimps, fish with herbs and grilled vegetables – the food here is a true delight for gourmets. Far East Restaurant offers its guests to try delicious oriental dishes. A part of its tables are located on the outdoor terrace, so guests ... Open »