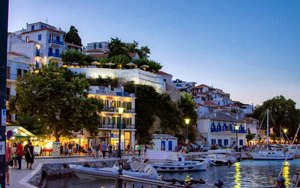 Skopelos is a small island but there are many catering establishments on it. They are called «taverns» in Greece. Taverns are places which are mostly visited by the locals. They have a tradition to gather around the table with family and friends in a favourite tavern. You can visit a tavern, have a meal and enjoy local alcohol. Moreover, some of them offer an entertaining program for visitors. Dancers and singers perform in national costumes here. The program is made not only to attract tourists but for locals too.
Best beaches and recreation areas around Skopelos Island
There are more than a hundred beaches on Skopelos to choose from. Stafylos Beach is the closest to the capital. It doesn’t feature infrastructure, and therefore is almost never …

Open
If you want to find a tavern with traditional Greek dishes, look for a place where the majority of the visitors is locals. These taverns are usually held by one family for several generations. You won't find European service in taverns, but the dishes are delicious here. Moreover, you can find «speciality menu» in some of the taverns. It means that there are dishes made according to the recipes which were known in ancient times. There is no « Greek salad» in taverns for locals, they call it «village» or horiatiki salad. Horiatiki doesn’t have a particular recipe but some of the common ingredients are cheese, onions, olives, pepper, tomatoes. The salad isn’t seasoned with oil, you can find a bottle of it on the table and add it to your taste.
If you want to have a fast snack, look for souvladzikos. They are local kebab houses where you can try souvlaki and gyro. Souvlaki is a kebab made of meat, seafood or vegetables. The dish is considered to be ancient food because people cooked it in times of the Trojan War. Gyro is souvlaki with vegetables, fries and sauce in pita, round flatbread. Locals prefer to eat Gyro and souvlaki on the go. Copyright www.orangesmile.com
Top hotels in Skopelos Island for business trip or short vacation
There are more than 150 hotels and apartments on the island enjoying high demand among tourists. One of the most upscale hotels is Adrina located in the picturesque resort village of …

Open
However, there are many various meat dishes on Skopelos. Stewed beef stifado can be found in many taverns. Dolma is a delicious dish made of ground meat, stuffed with grape leaves. Pastitsio is a pasta dish with ground meat and bechamel sauce. Don’t pass by moussaka, a layered dish with potatoes, eggplants and ground meat. Paidakia is grilled lamb chops. It is usually served with tzatziki, yoghurt sauce with garlic and cucumbers. Tefteli, lounza and loukanika sausages also deserve your attention. If you love soups, be sure to try fasolada. It is the most famous and oldest Greek soup. Odysseus could eat this dish because it was known in the first millennium BC. Vegetarians may enjoy revithia, made of chickpea. If you love fish dishes, be sure to try kakavia. The best chicken soup is avgolemono. 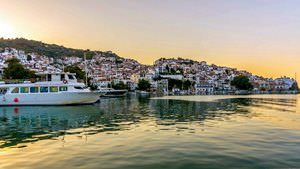 The best fish and seafood dishes can be found in psarotaverns near the shore. Moreover, you can bring your catch and ask to cook it for a reasonable price. There is a wide choice of fish dishes on Skopelos: from fried gilt-head bream to grilled sea bass, stewed octopus and taramasalata. Be careful when ordering a dish. There can be «*», «k» or «kat» indications in front of the name of the dish. These indications show that the dish was made of frozen imported fish.
Shopping in Skopelos Island - main shopping streets, outlets and boutiques
Don’t leave Skopelos without a bottle of olive oil. It is highly produced and used on the island. It is obvious because oil is not only a souvenir product here. You will find a bottle …

Open
Greeks usually eat yoghurt with nuts and honey for dessert. Eastern sweets such as lokum, baklava and kozinaki are also popular here. Keik me giaourti is a honey cake with yoghurt. Galaktoboureko is a traditional Greek pie. These two desserts are considered to be heavy food and Greeks usually eat it in winter. Qurabiya and vasilopita are usually eaten on holidays. You can find coffee and juice everywhere on the island. Most of the coffee houses are opened early in the morning, Greek usually start a day with this drink. Be sure to try local retsina and local wine, including homemade which you can find in every tavern. Metaxa cognac, grape vodka grappa and anise vodka ouzo are very popular hard drinks too. The last one can be found in ouzeri. Patsas soup will help you to restore your health after a long night.

This guide to cuisine and restauraunt in Skopelos Island is protected by the copyright law. You can re-publish this content with mandatory attribution: direct and active hyperlink to www.orangesmile.com.
Skopelos Island - guide chapters 1 2 3 4 5 6 7 8 9

Olive oil is the basis of Greek cuisine.The oil is cold-pressed, which ensures preservation of olive hale. Lemon is used to emphasize the taste of the oil; it is also added to many dishes. Much attention is paid to vegetables. The most iconic example is the famous Greek salad. Mandatory ingredients are tomatoes, cucumbers, olives, and feta cheese. Latter is made of sheep's milk with an addition of goat’s milk. Feta has a high fat content and recognizable taste. The salad is seasoned with olive oil, black pepper, oregano, shallots, and garlic. Greek snacks are simple; they are often based on yoghurt or cheese and are served with bread. The most popular meat snack are pork kebabs, souvlaki. … Open

Searching where to eat - restaurants and cafe on Skopelos Island map

Cuisine and restaurants in the neighbours of Skopelos Island

Skiathos
No less attractive is the Mediterranean restaurant Crazy Cow. Its menu will impress those who are fond of meat delicacies and can’t imagine a meal without a glass of good wine. There will be refreshments suitable for fans of fish dishes; visitors can always order fresh vegetable salads to complement their meal. For those who prefer Italian food, we can recommend the ... Open »
Alonissos Island
Souvlaki is not the only meat dish you can try on Alonissos. Be sure to try moussaka, a layered dish with eggplants, potatoes, ground meat and bechamel sauce. This sauce is also added to pastitsio, a pasta dish with ground meat. Paidakia, lamb chops, is a very delicious dish too. You should definitely try local dolma, grape leaves stuffed with meat. Cured pork louza, tefteli ... Open »
Skiathos Island
However, souvlaki is not the only meat dish on Skiathos. Local taverns serve delicious paidakia, grilled lamb chops. You should better order it with tzatziki, a yoghurt sauce with garlic and cucumber. Don’t pass by stewed beef stifado and moussaka, a layered dish with ground meat, potatoes and eggplant. Loukaniko sausages, dolma, grape leaves stuffed with meat and tefteli ... Open »
Sporades Island
Moussaka is also tasty. This dish, in fact, is a casserole of eggplant and meat with the addition of various ingredients. There is no single recipe, so you can easily order this dish in different taverns for comparison. It is also worth trying paedaki, mutton ribs, fried on coals. Arni kleftiko is suitable for those who love stew lamb with vegetables. If in the name of the ... Open »
Evvoia Island
The travelers can be advised to get acquainted with the traditions of Evvoia cuisine not in the cafes or restaurants, but in taverns. A tavern for a Greek is not just a place to eat. The regulars come here to discuss news with the owner and talk to each other, have a pleasant evening in a nice company with some local music. That is why in taverns they use the traditional ... Open »
Thessalia Region
Before everything else, we can recommend the restaurant called En Larisi. Here you can try their amazing grilled meat in combination with a fresh vegetable salad or a traditional Greek salad. For a snack, you can drop into a restaurant with a challenging name of Kimatothrafstis. Visit a restaurant of Italian cuisine, for example, Nonna Rossa restaurant or a pizza restaurant ... Open »