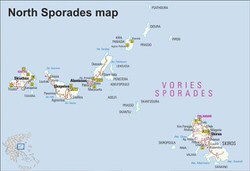 Interactive maps of hiking and biking routes around Sporades Island

1. You can zoom in/out using your mouse wheel, as well as move the map of Sporades Island with your mouse.
2. This interactive map presents two modes: 'Biking Routes' and 'Hiking Routes'. Use the '+' button on the map to switch between them.

This Sporades Island map has two modes: 'Railway Network' and 'Landscape & Rural Map'. Use the '+' button on the map to navigate.

Our guide to Sporades Island

Northern Sporades are good for those who like to relax on the beach. There is a beautiful pebbly Glisteri beach, and pebble-sandy Hamenos, and secluded Perivoli, and sand Megalos Acelinos, and Agnontas, favorite among free divers. Be sure to hire a boat and visit at least a few islands from all of Sporades. There are places for divers, and if you want you can get a diver’s license here. Yachting, surfing, … Open

Fans of desserts should not miss the local 10% fat yoghurt and baklava. Among alcoholic beverages, be sure to try the retsina, white or pink wine with an unusual aftertaste. Retsina is served chilled, and it is necessary to look for it in the stores not on shelves among wines but in the refrigerators among beer. Moschato, Nemea, Rapsani, Robola, Savatiano – these are just a few varieties of local wines that … Open

Traditions and mentality of Sporades Island

The Greeks cannot be called incredibly hardworking. The main thing for them is to get pleasure from life. From 2 to 5 p.m. life freezes even in small towns of Sporades. It is siesta time. The shops are closed, the number of staff in the cafes is greatly reduced. The Greeks appreciate the time of rest. In many respects, this is due to the fact that it is not customary to strive for big money simply for the sake of … Open

The National Marine Park is a fantastic place to get acquainted with the diversity of marine creatures. There is also an interesting museum in the territory of the park. Here visitors have an opportunity to learn about rare species of marine animals that are on the verge of extinction nowadays. On Skiathos Island, travelers are welcome to attend Koukounaries. This is a gorgeous nature reserve, during an excursion … Open

Sporades Island for children - what to visit

Many locals still live in the same rhythm as they did centuries ago. A considerable number of buildings here is made under the influence of the Cycladic culture that existed on the shores of the Mediterranean Sea in the 2-3 centuries BC. A child of any age will like the villages of the local residents, especially where the traditions of wearing national costumes still exist. Kids will be interested to learn more … Open

Kozinaki, baklava, nougat, and lokum, as well as honey, will be an excellent gift for a sweet tooth. Coffee fans should consider buying at least one or two packages of coffee beans. The Greeks love coffee, they know how to make it and sell only the kinds of the best quality and taste. From alcohol, you can buy anis vodka ouzo, grape vodka rakia or a herbal mixture of brandy and wine called "Metaxa." Local wine is … Open