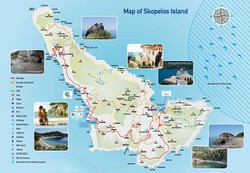 Interactive maps of hiking and biking routes around Skopelos Island

1. You can zoom in/out using your mouse wheel, as well as move the map of Skopelos Island with your mouse.
2. This interactive map presents two modes: 'Biking Routes' and 'Hiking Routes'. Use the '+' button on the map to switch between them.

This Skopelos Island map has two modes: 'Railway Network' and 'Landscape & Rural Map'. Use the '+' button on the map to navigate.

There are 5 large international airports in the country. About 22 of them have the national status. They also have a right to welcome international flights, but the capacity of their terminals is not too large. Another 25 airports in the country are designed for domestic flights; in particular, for flights from the mainland to the island of Greece. All international airports welcome about 85% of the total number of visitors to the country. They are located close to the major cities of Greece, which can be reached either by public transport, by taxi or transfer. While waiting for the flight or arriving at the airport, passengers can use ATMs or local and international bank offices at the terminal exit. There are various restaurants and cafes, as well as medical aid and baby care rooms in the airport area. Passengers can look into the picturesque souvenir shops and expensive branded boutiques. … Open

On May 1, a traditional festival takes place in Greece, during which city residents leave the metropolitan areas for a while and go to the countryside. At this time, performances, picnics and popular festivities are held. Parties are accompanied by loud music and dancing. At the end of May, a festival of roses takes place on the island of Rhodes. Solemn events are held in the old part of the city, which allows all participants to immerse themselves in the atmosphere of the Middle Ages. At this time, buds are blossoming and fine weather is set on the island. The festival begins with the sound of a trumpet that is heard from the castle. Cavalry and foot knights marche through the streets. In the small village of Epidaurus, there is an ancient theater, which has perfectly preserved to the day. This facility hosts the famous Hellenistic Festival that is one of the most iconic in the theatrical world. … Open

Our guide to Skopelos Island

Don’t leave Skopelos without a bottle of olive oil. It is highly produced and used on the island. It is obvious because oil is not only a souvenir product here. You will find a bottle of olive oil on every Greek kitchen. You can find oil in souvenir packages in the shape of amphorae or a famous Greek character. Moreover, you can buy a plastic 1-litre bottle or 3 and 5-litre jerrycans. If you have bought oil in … Open

There are more than a hundred beaches on Skopelos to choose from. Stafylos Beach is the closest to the capital. It doesn’t feature infrastructure, and therefore is almost never crowded. Those who want to spend time in relaxed atmosphere would like to have vacations there, away from the noisy companies and entertainment venues. The busy gravel and sand Velanio Beach is situated nearby. Its territory has … Open

Skopelos Island for children - what to visit

Skopelos is an incredibly picturesque island. Despite the fact that the island is situated not far from mainland Greece, it is not touched by civilization. Active and curious children will definitely love the island. Skopelos is a perfect place for long walks. It is hard to get lost here, the length of the island is only 20 kilometres and the width is only 5 kilometres. In spite of the small size, there are various … Open

Besides the observation of historical landmarks, guests of Skopelos are welcome to make their vacation even more exciting by relaxing on picturesque beaches. Besides its everlasting popularity, Limnonari Beach has managed to retain its natural beauty. Located in an incredibly beautiful bay, this sandy beach is like a magnet for all fans of scuba diving. Panormos Beach is located in the same named bay. The beach is at … Open

Traditions and mentality of Skopelos Island

Despite the fact that tourism is developing on Skopelos, it is still a quiet place. The atmosphere on the island is so relaxing that even straight workaholics forget about their work and all the problems and enjoy their holidays. It is caused by the fact that Greek people believe that the most important thing is to make the most of life. Greeks never work hard and it is not important for them to earn money. They will … Open

Skopelos is a small island but there are many catering establishments on it. They are called «taverns» in Greece. Taverns are places which are mostly visited by the locals. They have a tradition to gather around the table with family and friends in a favourite tavern. You can visit a tavern, have a meal and enjoy local alcohol. Moreover, some of them offer an entertaining program for visitors. Dancers and singers … Open