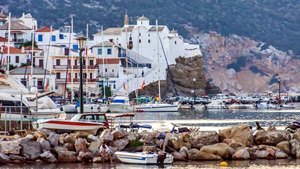 There are more than a hundred beaches on Skopelos to choose from. Stafylos Beach is the closest to the capital. It doesn’t feature infrastructure, and therefore is almost never crowded. Those who want to spend time in relaxed atmosphere would like to have vacations there, away from the noisy companies and entertainment venues. The busy gravel and sand Velanio

Beach is situated nearby. Its territory has appointed sitting areas, as well as rental of beach equipment and attractive taverns. On this beach you can comfortably rest in the early morning until late at night; it attracts visitors not only with its infrastructure, but also spectacular scenery.
Guide to Skopelos Island sightseeing - things to see and to visit
Skopelos is one of the most picturesque beaches in Northern Sporades; only 20 kilometers share it with mainland Greece. It’s rather large and is the second largest island of the …

Beach is very popular not only among tourists, but also among locals. This beach is in demand of travelers with children and gourmets, thus it’s never empty. The fact is that its territory features one of the most popular taverns of Skiathos specializing in tasty seafood. One of the largest beaches on the island is Limnonari situated in the beautiful cove of the same name. Length of the beach is about 300 meters. This stretch of coast is covered with fine white sand. Here you could get everything for a comfortable stay. There are some great taverns and equipped area for sunbathing on the beach. There is a decent selection of great hotels, and entertainment venues.
Panormos Bay is another popular tourist place that is home to luxurious hotel complexes and apartments. Both fans of relaxing stay and active travelers enjoy rest there, as there is a magnificent water sports center. A small yacht marina is also situated in the bay, so guests always have an option to diversify leisure with exciting boat trips. Gourmets won’t be bored too, as a choice of taverns on the beach is more than decent. Copyright www.orangesmile.com
Family holidays with kids in Skopelos Island. How to entertain your child, things to show to children.
Skopelos is an incredibly picturesque island. Despite the fact that the island is situated not far from mainland Greece, it is not touched by civilization. Active and curious children will …

Open
Adrines deserves special attention among popular pebble beaches; its length is about 500 meters. Thick pine forests loom close to the coast; old trees successfully replace sunshades. The beach is in demand among travelers with children, as it’s hooded from wind and is considered one of the quietest on the island. 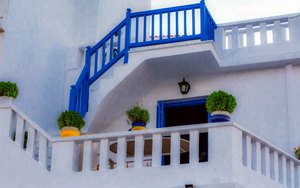 Another very interesting and attractive holiday destination is Amarandos that is a series of rock formations and small coves. These places attract fans of wild beaches, travelers with children and fishers; there are also excellent facilities for scuba diving. There are lots of small coves on the coast, so it’s not difficult find a quiet place.
Cuisine of Skopelos Island for gourmet with top restaurants and cafe
Skopelos is a small island but there are many catering establishments on it. They are called «taverns» in Greece. Taverns are places which are mostly visited by the locals. They have a …

Open
Milia covered with amazing round pebble is a best fit for comfortable vacations. That’s a well-equipped beach providing a wide range of services to fans of water sports and active entertainment. The only drawback of the beach is a large number of vacationers. Those who don’t mind the cosmopolitan atmosphere should pay attention to Kanalaki Beach. It’s considered one of the most beautiful on the island. This gravel part of coast is surrounded by very picturesque cliffs, where you can hide from the hot sun.

This guide to top beaches in Skopelos Island is protected by the copyright law. You can re-publish this content with mandatory attribution: direct and active hyperlink to www.orangesmile.com.
Skopelos Island - guide chapters 1 2 3 4 5 6 7 8 9

Barzani natural reserve is in the north of the country, close to the border with Albania. That’s a real ecological museum. The park artificially created a population of different species of wild animals. Today, serious measures are being taken to maintain a decent environment for their existence. There are such animals as the deer, the red deer, the Kri-Kri goat, and the European roe deer. Not far from this place, there is another national park, Pindus. According to legends, the Pindus were inhabited by the Muses of Apollo. Various species of coniferous trees grow and a large number of different birds live in the park. … Open

Search for useful vacation services on the Skopelos Island map

Top beaches and recreation areas in the region of Skopelos Island

Alonissos Island
Alonissos Beach is a versatile holiday destination. Discerning travelers will appreciate the well-equipped stretch of coast and the attractive tavern. Romantic natures would be impressed by the unique nature, warm golden sand and water of saturated turquoise. There are specially equipped areas for camping in the remote corners of the beach, so everyone can spend several days on ... Open »
Skiathos Island
Banana beach is the closest neighbor to Koukounaries Beach. The former is informally divided in two. This coast is known for its natural beauty. If Big Banana Beach is an excellent place for travelers with kids, then Small Banana Beach is a good choice for nudists. Attractive Megali Ammos Beach is located next to the capital and is known for its lively atmosphere. It offers ... Open »
Sporades Island
Beaches of Skopelos are also beautiful, appealing and diverse. Deep Limnonari beach has being a popular choice for diving enthusiasts and those in fond of wild coasts for many years. Charming Panormos bay located near the island’s capital is well-known after its miniature unsettled island. It's an excellent choice for travelers with children due to the shallow coast and warm ... Open »
Evvoia Island
Beaches of Dirfi located to the north of island's capital are widely regarded as the most spectacular in whole Greece. There're lots of interesting beaches around the capital as well. These are the busiest parts of the island's coast, especially in high season, but even so thousands of tourists spent time there in amazing and comfortable surroundings. Lots of gastronomical and ... Open »
Thessalia Region
Beaches of Larissa are recommended to fans of beach activities; Agiokampos beach is considered the most popular. This eco-friendly part of coast features developed infrastructure; there are excellent schools and water sports equipment rentals. Beaches Kokkino Nero located in the immediate vicinity of the capital will be good for hideaway. This stretch of coast is a combination ... Open »
Aegina Island
Aegina represents a decent selection of picturesque beaches and there won’t be a trouble to get there. The most crowded and popular site on the island is the sandy beach of Agia Marina. Length of the beach is about 500 meters; it differs with developed infrastructure and very lively atmosphere. There is an excellent water sports center and rental; visitors can get lovely sun ... Open »

Travel guide to best natural recreation areas in Skopelos Island for a quiet and secluded summer vacation. Fascinating hidden beaches, amazing bay and coves to sunbathe and swim in the gentle waters of the resorts of Skopelos Island.