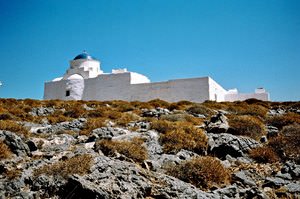 Sifnos has a turbulent past. Once there was an important outpost of the Phoenicians and Koreans. Later the island became famous for its ceramics, became a target for pirate raids and their home base, later moved to the Venetian Empire, and returned to Greece relatively recently. With such a history, it is not surprising that you can see here a large number of monuments from different eras. The main port of the island, Kamares, was used by Phoenicians and Johnites. Little has been preserved here from the ancient epochs. It is now a small and rather expensive town in the traditional Cycladic style. Everyone who wants to feel the atmosphere of the modern Greek islands should walk here.
Shopping in Sifnos Island - main shopping streets, outlets and boutiques
Be sure to bring at least one product from the local potters from Sifnos. Pottery has developed here since time immemorial, and to this day masters use some techniques exactly the same as a …

Open
However, just 6 kilometers from the modern port city is Apollonia, the modern capital of the island. This is not only an amazing, beautiful place with white stone houses but also the location of the famous Folk Museum, which can be found on the central square of Platia Iroon. The museum is known for a good collection of household items and handicrafts, national costumes and weapons of local residents. It is open every day from 9.30 to 22.00 with a siesta break, but may not receive visitors, regardless of the schedule. Also in Apollonia there is an 18th century church, Panagia Uranoforia, which was built with fragments of the 4th century BC Apollo temple. These preserved parts of the ancient structure are among the oldest found in this region of Greece. It is worth going up to the “cathedral with a balcony” of Agios Spyridon, not only for the sake of the building itself but also for the beautiful view of the whole island.
Not far from Apollonia, you can find the village of Artemion. There are many beautiful mansions in Neoclassical or Venetian style. The local church of Panagia-Gurnia is famous, like the 17th-century temple of Agios-Georgios, for its frescoes, and the Koch church was built on the foundation of the ancient temple of Artemis. If you find the Panagia-Gurnia church closed, then ask for a key in the neighboring house – the locals are happy to show the cult structure to the travelers. In Artemion, you can see the People's Exhibition of Yiannis Atsonios, which is, in fact, a house museum, furnished in accordance with the customs and traditions of the local residents. Copyright www.orangesmile.com
Guide to Sifnos Island sightseeing - things to see and to visit
Sifnos is one of the most popular Greek islands from the tourist point of view; the small island is annually visited by thousands of travelers from all over the world. Active colonization of …

Open
Be sure to stroll along the old capital of the island, the city of Castro. There are many buildings that preserved from the 15th-17th centuries. Several churches of the 18th century, columns and coat of arms classical for the Venetian architecture, narrow streets with arches. Here you can even see the ancient sarcophagus, located almost in the middle of the pedestrian part of the street. The archaeologists have discovered in the territory of Castro the ruins of an older settlement, and today everything that they managed to find on the territory of the Acropolis is exhibited in the local Archaeological Museum. You can get there only from Thursday to Sunday from 8 to 14.30. You can find the museum in the upper part of the settlement in the building of the former Catholic Church. 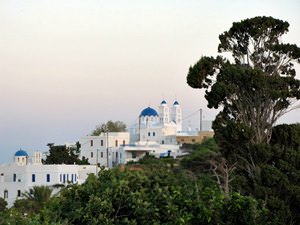 If you love monasteries and temples, then you should go on the road to Faros. The fact is that between Faros and neighboring Platis Gialos there is the most beautiful monastery of Chrysopigi on the beach, where a church, built in the 17th century, has remained to this day. Another beautiful monastery can be seen very near the village of Vati, which inhabitants, like in the old days, are engaged in fishing. The Monastery of Taxiarches is consider the most beautiful of all that are located in Sifnos, and it means something, considering the abundance of the local religious buildings. When visiting churches and monasteries, remember that you will not be allowed inside wearing too revealing clothes.

In the section below, you can get one of our excursion, activities or city discovery tours over Sifnos Island and surroundings. Our website offers 10-30% lower ticket prices, when compared to the offline purchase on the spot.

City tours, excursions and tickets in Sifnos Island and surroundings

This guide to cultural sights Sifnos Island is protected by the copyright law. You can re-publish this content with mandatory attribution: direct and active hyperlink to www.orangesmile.com.
Sifnos Island - guide chapters 1 2 3 4 5 6 7 8 9

Excursions over cultural sights of neighbours of Sifnos Island

Seriphos Island
Local Folk Museum is located in a house built in classical Cycladic style. Here are exhibited household items, works of art, clothing and shoes of local residents of 19-20 centuries. The rooms of the Museum designed to resemble a traditional Cycladic house. There is an open-air theatre next to the Museum, which often hosts a variety of performances, concerts and workshops on ... Open »
Milos Island
From a historical point of view, the Papafranka Cave is also interesting. It was a real pirate den in the Middle Ages. The history fans will like the unique Mountain Museum, located on the beach called Paliorema. In addition to rock samples, the museum’s exposition includes various devices used in ore mining – both modern and those that were in use centuries ago. Those ... Open »
Folegandros Island
Interesting and even a little mysterious object is Chrysospilia cave. This place is considered to be one of the largest caves in Greece with stalagmites and stalactites. The archaeologists haven't finished the exploration of the cave, but there have been found objects related to the 5-4 centuries BC: human skeletons and clay amphorae. Hundreds of names were carved on the ... Open »
Paros
The island of Paros has carefully preserved the heritage of the past. Its territory keeps numerous unique historical objects. The most remarkable and significant landmark of the capital of the island is the Panagia Ekatontapiliani church. The literal meaning of the principal church of the city is the church of hundred doors. The first religious construction on its place was ... Open »
Syros
Syros Island may seem deserted only at a first glance. Numerous interesting objects that are sure to fascinate a curious traveler are situated there. Ancient port of Ermoupolis appeals to those who like to walk around the picturesque historic sites. There are several attractive cafes and antique shops within the port district, so foreigners would have a perfect opportunity to ... Open »
Ios Island
If you like cult objects, frescos and icons, try to visit as many local churches as possible. They were built at different times and charm visitors with interior beauty. Be sure to visit the Museum of Modern Art in Kolitsani. There are presented modern artworks and you will get to know to modern Greek artists, poets and writers. Moreover, there are hold different photo ... Open »

Culture guide to Sifnos Island. Which fascinating sights to visit once you are in Sifnos Island: temples, churches, museums, theaters and castles. Recommendations (with addresses, phone numbers and links) on the places 'must visit' in Sifnos Island. Plan your own city excursion by using this page info!