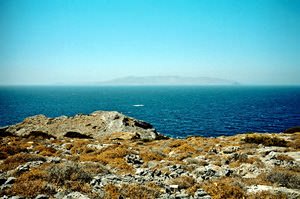 The love of the inhabitants of Sifnos for pottery is reflected even in the specifics of the local cuisine. Clay pots of different types and forms are widely used here for preparing a whole range of dishes. It became a kind of a gastronomic landmark of the island. For example, revifada, which is prepared mainly from slightly boiled and smoked chickpeas with onions, olive oil, and bay leaf, languishes overnight in a special dish called skepastaria. Mastelo, the meat of a goat or lamb, is baked with wine on grape rods in a special clay pot.
Excursion over cultural sights of Sifnos Island - 'must visit' points of interest
Sifnos has a turbulent past. Once there was an important outpost of the Phoenicians and Koreans. Later the island became famous for its ceramics, became a target for pirate raids and their …

Open
A salad of dry capers can also be called an interesting local dish. Local chefs like to cook cutlets. There are a lot of varieties of this dish, and the ingredients always are very different, ranging from the usual meat and fish and ending with peeled peas and fish caviar. On Synfos, they produce a considerable amount of cheeses. It is necessary to try mizithra, anthotyro, and manura. The latter, by the way, ripens in a special vessel in the squeezes from red wine and has a truly unique taste. Anthotyro, together with local honey, forms melopita. They sometimes use pumpkin as a pie filling, and as a dessert – almonds, which are simply cooked in a frying pan or in the oven.
However, in Sifnos, you can find a lot of places where you will also be served traditional Greek dishes. To get acquainted with the local cuisine, you should look for taverns where the majority of clients are not travelers but the locals. The establishments designed for "their own", are often held by one family for centuries and have their own traditions of cooking. They do not try to please the taste of foreigners – the formula remains unchanged. The easiest way to find out if you are in the right place or not is to look at the menu. In the local taverns, you will never see a “Greek” salad, just “village” or “homemade”. Horiatiki is made from tomatoes, cucumbers, peppers, olives, and onions. The recipe may vary from tavern to tavern, so don't be afraid to order this salad in different places for comparison. Copyright www.orangesmile.com
Your active city break in Sifnos Island. Attractions, recreation and entertainment - best places to spend your day and night here
Sifnos is not just about architectural monuments, but also about a large number of opportunities to diversify your leisure time. For example, here you can become closely acquainted with …

Open
Those who like meat should be advised to try moussaka, puff casserole of eggplant, potatoes and minced meat with bechamel sauce, or pastitsio, pasta with minced meat. You can try pork chops, roasted on a spit or coals of brizola, and lamb's ribs paidakia, and kotopoulo chicken. It is best to look for meat dishes in special taverns – psistaria. If you want to have a quick snack, then try the local fast food in a souvlatzidiko, a barbecue cafe. Here they serve souvlaki kebabs made from chicken, meat, fish or vegetables in Greek pita with french fries, vegetables, and gyro sauce. However, you can eat souvlaki separately. 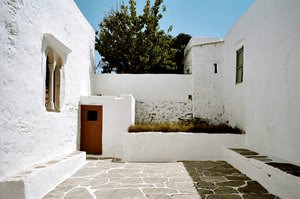 Vegetarians should turn their attention to melitzanosalata, a salad from baked eggplants, and tzatziki – thick yogurt with cucumbers and garlic, which is also often served with meat. In the psarotaverna you will be served dishes from fish and seafood. There are a lot of dishes here – boiled, and fried, and baked fish, and salads with seafood, and stewed squids, and fresh mussels without heat treatment with lemon juice. In short, the choice is huge.
Best beaches and recreation areas around Sifnos Island
One of the most picturesque and popular places on the island is Vathi Beach; it’s a continuous series of quiet secluded bays. The beach is very popular among travelers going for …

Open
Among the desserts on Sifnos, they prefer yogurts, baklava, otherwise called baklavas, and loukoumades. Yogurts, by the way, many eat with almonds and nuts, so the delicacy becomes quite hearty. Of the drinks juices and, of course, coffee are common on the island. Tea is almost never served here – the Greeks drink it only as a medicine for a cold. Among alcohol, you should pay attention to local retsina, grape vodka rakia, anise vodka ouzo. By the way, if you have drunk too much the previous day, it is worth looking for patsatzidiko, where they serve patsas soup, which relieves well of the consequences of immoderate drinking.

This guide to cuisine and restauraunt in Sifnos Island is protected by the copyright law. You can re-publish this content with mandatory attribution: direct and active hyperlink to www.orangesmile.com.
Sifnos Island - guide chapters 1 2 3 4 5 6 7 8 9

City tours, excursions and tickets in Sifnos Island and surroundings

Searching where to eat - restaurants and cafe on Sifnos Island map

Cuisine and restaurants in the neighbours of Sifnos Island

Seriphos Island
Fasolada is a dish of ancient Hellenes, which came to us almost unchanged. Fasolada is delicious bean soup. As a first course, you can order vegetarian chickpea revithia or fish kakavia. You should better try Fish dishes in psarotavernas, which are usually located close to the seashore. You can bring fresh fish to a tavern and ask to fry, boil or bake your catch at a ... Open »
Milos Island
The taverns that specialize in fish dishes are called psarotaverns. When ordering, pay attention to one detail – if there is a “k”, “kat” or “*” designation opposite the dish that you have chosen, this means that it is prepared not from fresh local fish but from imported frozen one. The price, by the way, is often indicated per kilogram, whereas the real ... Open »
Folegandros Island
Fast food is also delicious in Greece. Souvlaki is a popular food here. You can find this grilled meat in taverns or souvlatzidikos. It is usually made of fish, meat and even vegetables. There is also a fast food dish, called gyro. It is souvlaki with vegetables served in a pita. However, there are various meat delicacies on Folegandros. Moussaka is a layered dish made with ... Open »
Paros
The island of Paros offers its guests a stunning choice of original gastronomy destinations. Even the smallest localities of the island will offer its visitors excellent ethnic restaurants and cafes. A major part of popular restaurants is located in the capital of the island, the city of Parikia. The most upscale and romantic eating place of the city is considered to be the ... Open »
Syros
Syros Island may seem deserted only at a first glance. Numerous interesting objects that are sure to fascinate a curious traveler are situated there. Ancient port of Ermoupolis appeals to those who like to walk around the picturesque historic sites. There are several attractive cafes and antique shops within the port district, so foreigners would have a perfect opportunity to ... Open »
Ios Island
You can find horiatiki or village salad in every tavern. Locals never call it a Greek salad. It is usually made of olives, tomatoes, cucumbers, green peppers, onion and cheese. The salad is not always seasoned with oil, but you can find a bottle of olive oil on the table and add it to your dish. Don’t pass by tzatziki, a local yoghurt salad with cucumbers and garlic. It is ... Open »