Cuisine of Syros for gourmets. Places for dinner - best restaurants 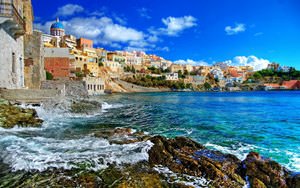 Syros Island may seem deserted only at a first glance. Numerous interesting objects that are sure to fascinate a curious traveler are situated there. Ancient port of Ermoupolis appeals to those who like to walk around the picturesque historic sites. There are several attractive cafes and antique shops within the port district, so foreigners would have a perfect opportunity to combine tasting of local food with exploring historical attractions.
Best beaches and recreation areas around Syros
Coast of Syros is a series of attractive beaches and picturesque resort towns. The most popular beach areas are located to the west of the island. Here is a charming town of Keene, whose …

Open
Miaouli square is the center of this port town; the former is home to an important architectural monument, Town Hall. Nearby there is one of the most popular cultural centers of the island, Apollo Theater. Continuing a tour around the town, you can visit the picturesque Valorem area. There remained some fine old mansions, where notable citizens and shipowners once lived.
There are amazing religious sites in this town. The picturesque Church of St. Nicholas features incomparable architectural performance and luxurious interior decoration. City Library is another important cultural center; it has an extensive collection of antique books, including many unique ones. There are several important archaeological areas on Syros, where scientists were able to find many unique artifacts. All comers can admire them, as all findings of scientists are represented at the Archaeological Museum. Copyright www.orangesmile.com
Top hotels in Syros for business trip or short vacation
The island of Syros has more than a hundred accommodation places to offer. Those are luxury hotels and budget inns that will please thrifty travelers. The most prestigious hotels are found …

Open
The village of Ano Syros was founded on a hilltop in the 13th century; its main symbol is the church of St. John. There you can also see the old monastery of the Jesuits, which was founded in the 18th century; the hill offers a great panoramic view of the island. Vacationers have a unique opportunity to visit interesting archaeological areas and see the ruins of the buildings that are thousand years old. 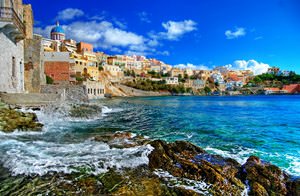 The most ambitious and interesting areas are Castries and Halandriani, where objects of the Bronze Age are represented. Another curious landmark is Grammata bay surrounded by cliffs; it is one of the most important natural attractions of Syros. You could see ancient inscriptions and drawings on the rocks surrounding the bay, which have been made by locals thousands of years ago.

This guide to cuisine and restauraunt in Syros is protected by the copyright law. You can re-publish this content with mandatory attribution: direct and active hyperlink to www.orangesmile.com.
Syros - guide chapters 1 2 3 4 5 6 7

City tours, excursions and tickets in Syros and surroundings

Among the hot dishes, musaka deserves a special attention. That’s a baked dish of ground beef (usually lamb or veal), eggplant, and tomato. On top, the dish is seasoned with Bechamel sauce. Sometimes, potatoes, zucchini or mushrooms are also added to the casserole. Traditional soup, avgolemono, is cooked on the basis of chicken broth; lamb or beef may be used too. A fine pasta and egg-lemon mixture, which gives the soup an acidic taste, are added later. The dish is served as a puree; in cold state, it can be used as a sauce for other hot dishes. Spartan chowder is one of the most specific dishes of Greek cuisine. It is cooked of pork legs and blood with an addition of lentils and vinegar. The history of the soup goes deep into the antiquity. This kind of food was intended for old people who refused meat in favor of the young. … Open 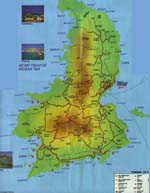 Searching where to eat - restaurants and cafe on Syros map

Cuisine and restaurants in the neighbours of Syros

Tinos Island
Be sure to order octopus stewed in tomato sauce in one of the many taverns on the island. Local housewives cook it just masterfully. Soft, slightly springy meat combined with spicy tomato sauce will not leave you indifferent. Tinos offers excellent pastries. It is most often cooked from puff pastry or Filo dough. You should taste spanakopita. These are classic triangular ... Open »
Mykonos City
The Fokos restaurant greets the visitors with popular Mediterranean cuisine dishes. Meat dishes prepared on the open fire are considered to be the house specialities. In addition to main courses the visitors are offered a great selection of accompaniments and original salads. The Lotus restaurant specializes in Mediterranean cuisine as well. A part of the tables are served on ... Open »
Mykonos Island
Fish dishes can be found in psarotaverns. The best ones are situated close to the sea. Moreover, you can bring your fish and ask to cook it in a tavern. They serve different seafood such as fish, oyster, mussel, octopus and squid. Be careful when ordering a dish. The thing is that sometimes the menu shows the price per kilo and the portion can cost more or less. One more ... Open »
Paros
The city of Naousa also offers a vast choice of places to eat and rest. Its main gastronomy establishment is still the Yemeni restaurant being most in demand for many years. The restaurant is decorated in a traditional tavern style. Its guests may enjoy traditional dishes of ethnic cuisine. In the day time the guests of the Yemeni restaurant may enjoy a special budget menu. ... Open »
Seriphos Island
There are many meat dishes on Serifos. Do not miss the opportunity to try grilled lamb ribs called paidakia or stewed beef stifado. Be sure to try moussaka, a layered dish with eggplants, potatoes, ground meat and bechamel sauce, or pastitsio with the same sauce, minced meat and pasta. You should definitely try local dolma, grape leaves stuffed with meat. Meatballs kefalos, ... Open »
Andros Island
There are a lot of taverns and restaurants here. There are a couple of establishments even in small villages. There are a huge number of them on the waterfront in Andros. You can visit a new restaurant and taste new dishes every day. Prices are average here. Lunch for two persons costs 20-35 euros. You will pay about 40-45 euros for dinner with wine. You should order dishes ... Open »

Travel notes on best cuisine and restaurants of Syros (Greece) on OrangeSmile.com. Famous recipes and traditional dishes and courses in Syros restaurants. Where to eat - our recommendations on popular places in Syros, where you can taste delicious meal and also spend a good time with your friends.