Detailed hi-res maps of Ravenna for download or print 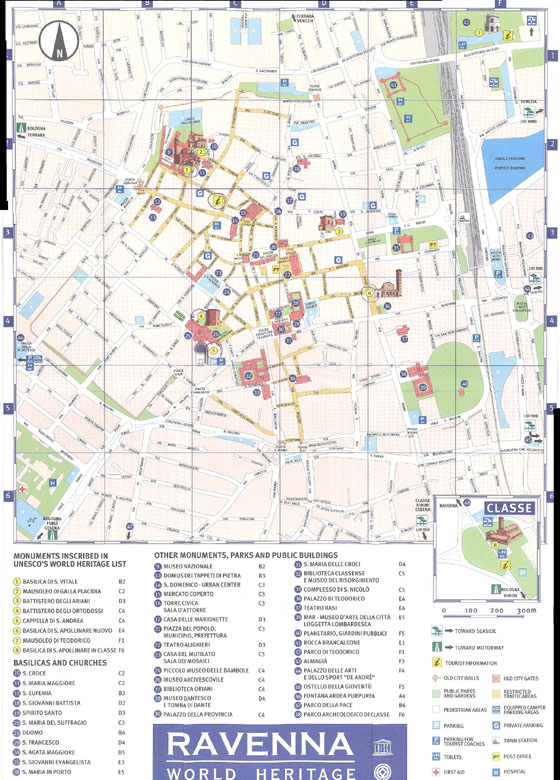 Search for services, infrastructure and sights on map of Ravenna

Our guide chapters over Ravenna

The basilica is noted for its luxurious internal decoration, its walls are designed with subtle mosaic sets and marble inlays. The Ostrogoth’s tomb constructions are part of the historical heritage of the city too. The Mausoleo di Teodorico is a unique building, which is mainly built of limestone blocks. The Mausoleo di Teodorico is among the sights of the global significance attracting annually thousands of … Open

The Archbishop's Museum is the greatest cultural center. It occupies a beautiful ancient palace. The exposition of the museum is made up of ancient works of art, which decorated destroyed churches previously. Among them are valuable paintings of the 6th century, created by Byzantine masters. One of the most precious antiques is a carved archbishop's throne, made of ivory. The National Museum of Ravenna is located … Open

5. A popular transportation means in the city is a bicycle which can be rented in one of specialized renting centers. Local residents ride red bicycles meanwhile tourists commonly ride yellow ones, a usual rent rate is about 10 Euro per a day of usage. The most popular renting center is Cooperativa Sociale la Formica located close to the central railway station. 6. The city offers a lot of attractive … Open

Maps of Rimini
At the seaside docks and boats get decorated with roses, beach leisure admirers opt for spending a night in the open air enjoying a pink night. Every night the beaches witness exciting parties and discos, commonly the parties go on till the sunrise. Every year this festival attracts more and more foreign guests. At present the Pink Night Festival attracts more than two millions ... Open »
Maps of Bologna
The event under the simple name of Bologna Festival is held between the middle of March and mid-May. The event is dedicated to classical music and is regularly attended by renowned and talented orchestras, conductors and musicians from all over the world as participants. Manzoni Theatre serves as a permanent venue for the festival. Within the framework of the event, there is ... Open »
Maps of Modena
In December, Modena prepares for celebrating Christmas and New Year. In the last month of the year, the traditional Superzampone Festival is held. It always takes place in the old Rangone Castle that turns into a big culture center at this time. In the castle, music and theatrical performances are held. You can also visit fairs and a traditional antiques market. The most ... Open »
Maps of Arezzo
According to the historical data, the first tournament was held in August 1535. The first holiday was dedicated to St. Donatus, the patron of the city. However, some scientists think that competitions of such kind appeared much earlier in Arezzo. The tournament resembles the traditional entertainment of knights, who polished their skills by piercing rag dolls with spears. ... Open »
Maps of Mestre
Here it is not customary to celebrate the New Year at home. Usually, people gather on the main streets and squares to join holiday programs and enjoy pyrotechnic shows. A festive dinner is arranged quite early, no later than 9:00 pm. According to another curious historical tradition, the lady of the house should put 13 different dishes on the New Year's table. Such a ritual ... Open »
OrangeSmile.com - online travel reservation expert providing reliable car rental and hotel booking services. We feature more than 25.000 destinations with 12.000 rental offices and 200.000 hotels worldwide.
Secure Server