Detailed hi-res maps of Arezzo for download or print 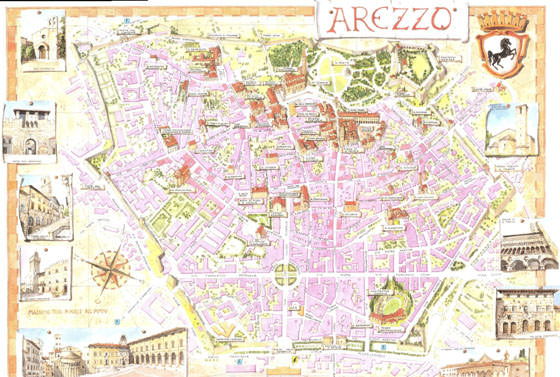 The actual dimensions of the Arezzo map are 2722 X 1834 pixels, file size (in bytes) - 885008. You can open this downloadable and printable map of Arezzo by clicking on the map itself or via this link: Open the map. 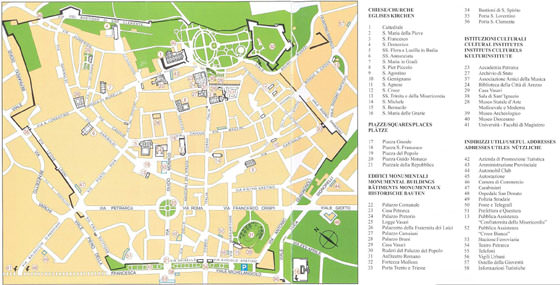 Search for services, infrastructure and sights on map of Arezzo

Our guide chapters over Arezzo

Gourmet tourists will surely enjoy visiting multiple restaurants that serve food from all parts of the world. Here you will be served best Italian delicatessens and deserts, while people, who enjoy exotic cuisine, will find what they like in Thai or Indian restaurants. While taking a walk in Arezzo suburbs, you can see olive groves, vineyards and rural zones. Don’t forget to participate in an excursion to one … Open

In order to see all landmarks of Arezzo, tourists will need more than one day full of excursions. Start your observation of the city from the Basilica of St. Francesco. The beautiful Franciscan church was constructed yet at the end of the 13th century. Some adjacent buildings appeared later, in 14th – 16th centuries. Even nowadays, visitors of the church can see beautifully made old stained-glass windows and … Open

Fans of shopping simply cannot fail to visit The Antiques Market in Arezzo. It’s a major event that draws nearly 20,000 visitors including sellers and tourists. The market is open on the first Sunday of every month and the Saturday before it. This is the time when Piazza Grande is filled with stalls that offer virtually everything – old furniture, coins, music instruments, antique clocks, silverware, … Open

Finally, if you prefer a good burger to gourmet cuisine, Alo Burger is a must-visit place. This restaurant proves that not only Tuscan dishes can taste good in Arezzo. Alo Burger is quick and cheap, but cheap price doesn’t mean cheap quality here. The restaurant also serves hearty Italian food that is a perfect day starter – tourists can stop there, quickly have a nutritious breakfast and head to long … Open

Another attractive old farmhouse houses Agriturismo Villalba hotel. It offers an excellent apartment with historical atmosphere and lots of amazing places to rest. For many years, the farm has being producing wine and olive oil, so holidaymakers will be able to taste them and even take part in production of some of the most important local products. The hotel borders with an incredibly beautiful forest that promises … Open

Traditions and mentality of Arezzo

If you happen to visit Arezzo at the end of May, check the date of Rievocazione Storica della Battaglia of Scannagallo. This fantastic event is held either on the last weekend of May or on the first weekend of June in Pozzo della Chiana, a small town just 30 minutes (less than 30 kilometers) away from Arezzo. In 1554, Pozzo della Chiana was the battlefield for military actions between Florence and Siena. That war … Open