Detailed hi-res maps of Bologna for download or print 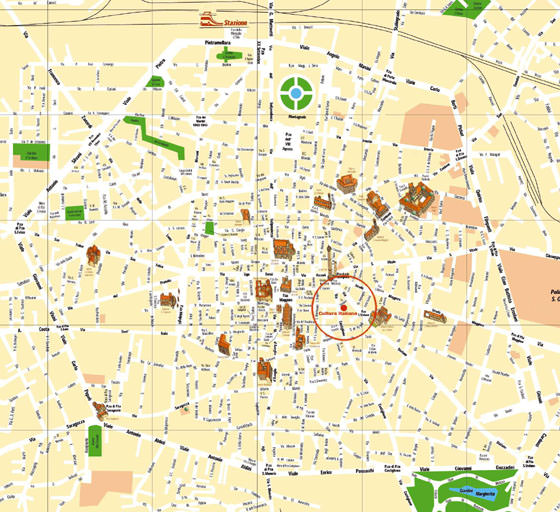 Search for services, infrastructure and sights on map of Bologna

Our guide chapters over Bologna

Tourists wishing to stay in the historic district will surely appreciate I Portici Hotel Bologna. A chic historic building housing the hotel has been completely restored. Original decoration and unique frescoes adorning high ceilings have been preserved as much as possible. You can see priceless works of art not only in public areas - frescoes decorate ceilings of some rooms. The hotel is aimed at a wide range of … Open

Bologna for children - what to visit

The park Piazza Trento Trieste does not have a large area. However, it attracts with its unique design. This beautiful small park is especially interesting to visit in the spring, when the trees bloom in it. In summer, the youngest visitors can run along the paths around the fountains and try branded sweets at a local cafe. For the locals, the park has become a favorite place for a picnic. Here you can arrange a … Open

B4 Bologna Tower by Boscolo invites travelers to spend a few days in a stylish setting. Its rooms painted in cream shades are decorated with original designer accessories: pieces of furniture of unusual shapes, glass panels, light fabrics and fresh flowers. A spacious lobby of the hotel was decorated with the use of rare woods and marble. La Caveja restaurant serving national cuisine offers an elegant atmosphere as … Open

In the immediate vicinity of Bologna, is a world-famous fur factory Mala Mati Marconi, whose visitors can purchase luxurious fur coats and other fur products at any time of the year. On its territory operates an excellent store with a worthy choice of goods. It is really attractive since high-quality fur coats can be bought on average 1,5-2000 euros cheaper than in ordinary boutiques. Traveling around the … Open

Hotels with history of Bologna

Modest Hotel Pedrini occupies another former monastery building dating back to the 16th century. Each of the rooms has its own peculiar features. Fragments of pristine stone walls have been preserved in some of them, while in others, beautiful frescoes are restored on the ceiling. The bathroom is designed with the use of natural stone and beautiful tiles, and the atmosphere is complemented by antique furniture … Open

5. Leaving tips in all restaurants, cafes and bars of the city is customary. As a rule, a typical amount of tips is 10 - 15% of the total bill. You can also leave tips to guides, maids in your hotel, hairdressers and local residents, who have kindly guided you to places of interest you seek. 6. The most beneficial way to make calls to other countries is to use telephone tubes marked with … Open