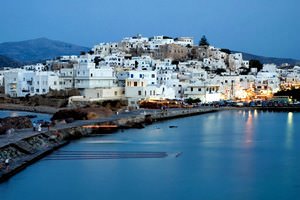 The rich history of Naxos is embodied in a huge number of attractions, including ancient temples and Venetian fortress built by the Byzantines and many museums that tell visitors about the most interesting historical and cultural features of the island. Among the main landmarks of the island, the Portara Gate has to be mentioned; those are ruins of the ancient Apollo’s Temple, which has been never completed. The Gate is located near the port of Chora, so it is the first site of the excursion program for many tourists.
Best beaches and recreation areas around Naxos
Guests of island of Naxos have over 20 charming beaches to choose from. Some of coast places are well known far beyond the country; picturesque Agios Prokopios beach is one of them. …

Open
The waterfront of the capital features the Venetian fortress, a large-scale and very picturesque architectural complex. Luxurious houses and mansions can be seen next to fortifications; the local nobility have lived there a few centuries ago. Suburban areas of Chora are rich in historical sites too. There is the monastery of St. John Chrysostom and the Cathedral not far from the capital.
Obligatory point of excursions is Bazeos Castle, which is the permanent venue for the main national holiday, the Festival of Naxos. This beautiful castle had been built in the 17th century; for many years it has remained the abode of monks. Then it was bought by the noble Bazeos family, whose name it inherited centuries later. The castle is very interesting from an architectural point of view; moreover, it constantly houses very interesting art exhibitions. Copyright www.orangesmile.com
Top hotels in Naxos for business trip or short vacation
Island of Naxos offers over 300 homelike hotels and some of them really deserve attention of tourists. Naxos Island luxurious hotel located in Agios Prokopios will surprise even the most …

Open
Travelers fascinated by Greek wine are sure to visit the picturesque village of Halki. It is home to the famous Vallindras winery, where famous wines and liquors are produced following old technologies. Very interesting objects are kouroses, ancient statues of Apollo and Dionysus. Fans of ancient history would be interested to visit the mountain village of Apiranthos featuring a number of historic buildings. 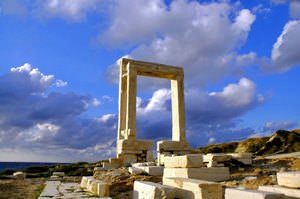 The most famous and most visited cultural venue of the island is the Archaeological Museum. It is located in Chora and has a rich collection of findings; the age of many artifacts is more than thousands of years. Among the most interesting objects of the museum there are collections of porcelain and ceramics, as well as beautiful antique statues. There is the interesting Archaeological Museum in Apiranthos. It includes an amazing collection of exhibits dedicated to geological structure of the island. Every city of Naxos features real living history; its spirit of the centuries only gets stronger from year to year.

In the section below, you can get one of our excursion, activities or city discovery tours over Naxos and surroundings. Our website offers 10-30% lower ticket prices, when compared to the offline purchase on the spot.

This guide to cultural sights Naxos is protected by the copyright law. You can re-publish this content with mandatory attribution: direct and active hyperlink to www.orangesmile.com.
Naxos - guide chapters 1 2 3 4 5 6 7
Reference information
Map of all art museums

Art galleries in Naxos and around
♥   Art museum 'Archaeological Museum of Delos' Delos, 34 km from the center. On the map 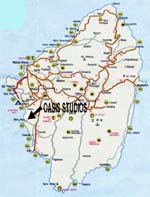 Photogallery of cultural heritage of Naxos

Excursions over cultural sights of neighbours of Naxos

Naxos
Among numerous landmarks and sights of Naxos tourists will discover Byzantine churches and majestic palaces, mighty Venetian fortresses and antique statues, numerous museums and contemporary exhibition halls. Each traveler will choose a tour after his or her own taste and heart and enjoy the majesty of original historical monuments and landmarks. In close vicinity to port area ... Open »
Paros
The island of Paros has carefully preserved the heritage of the past. Its territory keeps numerous unique historical objects. The most remarkable and significant landmark of the capital of the island is the Panagia Ekatontapiliani church. The literal meaning of the principal church of the city is the church of hundred doors. The first religious construction on its place was ... Open »
Mykonos Island
Locals say that you can visit different churches during a year and never go twice to the same one. There are many churches on Mykonos. They are situated in the centres of settlements, on the outskirts or even on the way from one village to another. Many of the local churches have been standing in their place for centuries and are considered to be historical sites. The most ... Open »
Mykonos City
A part of the monastery is reequipped into a museum which collection is concentrated on ethnic crafts. Concerning remarkable cultural establishments of the island the Aegean Maritime Museum is best worth noticing. The place of its location is a beautiful building of the end of the 19th century, ample halls of which keep several large collections. A significant part of the ... Open »
Ios Island
Ios was the arena of many bloody battles for many times. Greeks, Romans, Byzantines and, of course, Venetians visited this island. Every leader had to protect the land from the leaders of neighbouring countries and pirates, who attacked and robbed all nearby settlements. The Venetians built a large and beautiful fortress to protect Ios, which can be seen not far from the ... Open »
Tinos Island
Tinos is one of the islands of the Cyclades Archipelago. This is a real paradise for fans of temple architecture. More than 800 churches, monasteries, and chapels are located in a small area. Most of them belong to the Orthodox branch of Christianity. However, about 200 churches and monasteries are Catholic. The island is considered a shrine of the Christian world. Thousands of ... Open »

Culture guide to Naxos. Which fascinating sights to visit once you are in Naxos: temples, churches, museums, theaters and castles. Recommendations (with addresses, phone numbers and links) on the places 'must visit' in Naxos. Plan your own city excursion by using this page info!