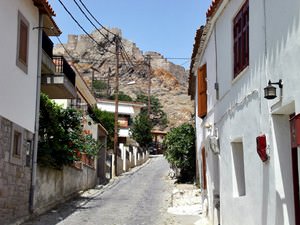 If you want to be fully satisfied with your holidays on Lemnos, be sure to enjoy local cuisine. Fortunately, there is no lack of catering establishments on the island. Locals call them taverns. Greeks are perfect cooks, especially men, but an evening in a tavern with family and friends is a part of the national tradition. So, if want to visit a tavern in the evening, it will be hard to find a free table here.
Your active city break in Limnos Island. Attractions, recreation and entertainment - best places to spend your day and night here
Lemnos will be a good place for holidays for those who love walking. There are many roads and paths, linking all the main settlements with architectural and natural attractions. While …

Open
If you want to get to know to traditional Greek cuisine which wasn’t changed for American and European tourists, try to find a tavern mostly visited by the locals. These taverns are usually owned by the same family for several generations. Don’t expect quick service and European politeness here. Taverns are not very client oriented, but you will definitely try delicious Greek food here, prepared according to national recipes.
The first dish every tourist should taste is a Greek salad. You should know that locals call it a «village» or horiatiki salad. Only foreigners call it Greek salad. Original Horiatiki salad is usually made of olives, tomatoes, cucumbers, green peppers, onion and cheese. The salad is not always seasoned with oil, but you can find a bottle of olive oil on the table and add it to your taste. Don’t pass by tzatziki, a sauce of cucumbers, yoghurt and garlic. It is usually served with mutton, different meat or pita, a flatbread. Copyright www.orangesmile.com
Best beaches and recreation areas around Limnos Island
Limnos beaches are among the main attractive features of the island. Thanks to a decent selection of scenic stretches of coastline, you can find a suitable place for secluded recreation and …

Open
There is a wide choice of Greek soups on Lemnos. You should definitely try fasolada, a traditional Greek soup made of beans and different vegetables. It is believed that fasolada was known in Ancient Greece. Vegetarians will definitely like chickpea revithia. The most popular fish soup is kakavia. A creamy avgolemono will be the best choice for those who want to try something exotic. Don’t pass by souvlaki, a popular Greek fast food, a local variant of kebab. It is grilled on a skewer and usually eaten straight off the skewer. This dish appeared before our era and the recipe hasn’t changed a lot. You can try souvlaki in souvladzikos. Souvlaki in a pita with vegetables, fries and sauce is called gyro. 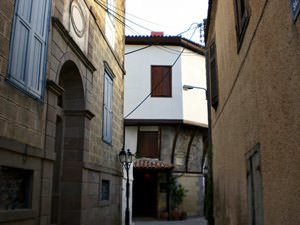 However, there are different varieties of meat dishes on the island. Stewed meat stifado is a delicious dish. Dolma is grape leaves stuffed with meat, rice and vegetables. Moussaka is a layered dish with meat, eggplant and bechamel sauce. Loukaniko sausages and tefteli are also delicious Greek food. Kokoretsi is an unusual dish. It is a lamb delicacy. You should look for fish dishes in psarotaverns. Be sure to taste stewed octopus, dorado and monkfish. You can taste all the seafood of the Aegean sea on Lemnos: from mackerel to cuttlefish and squids. Fish and seafood are boiled, stewed and fried here. A unique Greek delicacy is a taramasalata, fish roe mixed with boiled potatoes. You should know that sometimes the menu shows the price per kilo and the portion can cost more or less. One more important thing is «*», «k» or «kat» indications in front of the name of the dish in a menu. These indications show that the dish was made of frozen imported fish. While ordering a dish, ask a waiter about the price. The price can be specified for a portion, 100 grams of a kilo.
Top hotels in Limnos Island for business trip or short vacation
The most popular accommodation places are situated in Myrina, a few popular hotels can be found in Plati and the charming port city of Moudros. The upscale resort Varos Village is very …

Open
Greeks prefer to eat yoghurt with nuts or fruit or eastern sweets for dessert. You can find lokma, baklava, kozinaki and nougat in every supermarket on Lemnos. There are also heavy desserts like keik me giaourti, a honey cake with yoghurt and galaktoboureko, a traditional Greek pie. But Greeks usually eat them in winter. Coffee and juice are common soft drinks on Lemnos. But tea is used only as a remedy for a cold. Don’t pass by local chilled retsina, muscat wine, anise vodka ouzo, grape rakia, metaxa cognac.

This guide to cuisine and restauraunt in Limnos Island is protected by the copyright law. You can re-publish this content with mandatory attribution: direct and active hyperlink to www.orangesmile.com.
Limnos Island - guide chapters 1 2 3 4 5 6 7 8 9

Favorite desserts in Greece are melomakarona, which are cookies with honey, and loukoumades. Latter are deep-fried donuts with cinnamon. Loukoumades are often a part of the breakfast for those who like to start the day with sweets. To quench thirst in Greece, you can drink a local kind of coffee, frappe, which is served with ice. Among the drinks of Greece, wine is the most popular. Wine-making in this country originated thousands of years ago. The most popular wines are Retsina, Moshato, and Robola. Another famous Greek drink is Metaxa, which is a sort of brandy. Locals also produce their own aniseed vodka, Ouzo, and grape vodka, Raki. No feast in Greece can go without water and bread on the table. These are the obligatory attributes of both a gala dinner and an ordinary meal. … Open

Searching where to eat - restaurants and cafe on Limnos Island map

Cuisine and restaurants in the neighbours of Limnos Island

Lemnos
At Mantella restaurant, you can taste wonderful Greek and Mediterranean dishes. It serves the rarest sea delicacies, while fish and meat are mainly cooked on charcoal. The restaurant will surely appeal to vegetarians since the selection of vegetable dishes is quite impressive here too. The restaurant is stylized to look like a classic Greek tavern and has its own wine cellar. ... Open »
Thassos
Those preferring European and Mediterranean food can visit the Sea Breeze restaurant. Delicious fish platters, lobsters with house special sauce, various meat dishes and fresh salads will please everyone. Another Sea Breeze' feature is a wide choice of desserts and drinks. Vegetarians would like the Piatsa Michalis restaurant. It offers a dedicated menu for the guests with ... Open »
Lesvos
Lesbos is a true paradise for fans of Greek cuisine; there are attractive restaurants of national cuisine in every city of the island. Food lovers and tourists with special culinary preferences would be able to easily find a suitable place for rest, as the island has restaurants to suit all tastes and budgets. The popular restaurant serving Greek cuisine is Omega Restaurant & ... Open »
Kavala
Local cuisine is incredibly delicious and appealing. The majority of traditional dishes are nourishing and nutritious. Meat, fish, shellfish, fresh vegetables and fruit are the main ingredients used in the national cuisine. There is a list of dishes that tourists should definitely try during their stay in the city. This list should certainly contain Souvlaki (meat grilled of a ... Open »
Alonissos Island
Despite the fact that there are only about 3000 inhabitants on Alonissos, you will easily find many catering establishments here. Locals can't imagine their life without an evening in a favourite tavern, where they meet with friends and family. Greeks drink local alcohol, enjoy meals and listen to folk music. All cafes and restaurants are called taverns, except for souvladzikos ... Open »
Sporades Island
On the Sporades, as in the rest of Greece, it's best to get acquainted with the local cuisine where you see a large number of Greek clients. Local catering establishments are called "taverns". Service here is often not as fast as in most tourist-oriented European institutions but much more sincere. It is understandable because a tavern for a Greeks is not just a place where you ... Open »