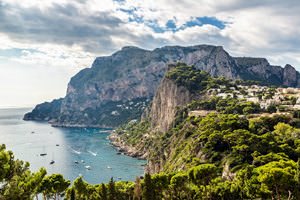 Despite its modest size, the island of Capri is characterized by an abundance of unique attractions. There are amazing historical buildings and archaeological areas, as well as curious natural attractions. The island is ready to offer its guests a very rich and interesting program of excursions.
Top hotels in Capri for business trip or short vacation
The main advantage of Capri is its decent selection of upscale accommodation places, so it would be possible to choose anything for every traveler. At the peak of popularity remains Caesar …

Open
The main symbol of the island is the Blue Grotto (Grotto azzurro). It is a long chain of caves formed in limestone rocks. As the name suggests, the water in the grotto is of deep blue color. Many curious myths are associated with this natural landmark; according to one of them, this ancient cave was a temple of nymphs.
As for historical sites, the most interesting among them is Villa Jovis. According to one version, this luxurious villa once belonged to the emperor Tiberius. The building has well preserved to our days and gives a complete picture of the former splendor of the imperial palace. The architectural monument of the later period is Villa Malaparte. It is located on a high cliff of Punta Massullo. This red-brick building looks very impressive at the sea landscape. Copyright www.orangesmile.com
Guide to Capri sightseeing - things to see and to visit
Isle of Capri has always been associated with a refined atmosphere of luxury. Everything here is perfect, including its climate, scenery and hospitality of locals. The island is only 10 …

Open
In the southern part of the island there is another important natural landmark, Giardini di Augusto. This is an incredibly beautiful park with an abundance of exotic plants and flowers. Rather unusual object is situated in the park; we are talking about the monument to Lenin. 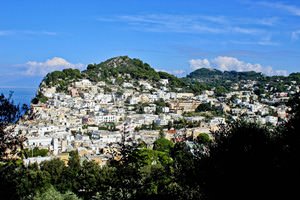 The town of Capri features a lot of interesting religious sites. The most impressive monument of the 17th century is Cattedrale di Santo Stefano. Only Clock tower, which is visible from many different areas of the town, has survived to the present day. A major renovation of Certosa di San Giacomo was completed recently. The monastery was founded in the 14th century; it is reminiscent of the days when the island was the main scenic abode of monks. There are numerous pristine elements of architecture and decorations in the monastery, including priceless frescoes and religious artifacts. On Marina Grande originates Phoenician Steps (La scala fenicia) connecting the capital of the island with picturesque town of Ankapri. The staircase has more than 900 steps, so you need to spend at least an hour to climb it.

In the section below, you can get one of our excursion, activities or city discovery tours over Capri and surroundings. Our website offers 10-30% lower ticket prices, when compared to the offline purchase on the spot.

This guide to cultural sights Capri is protected by the copyright law. You can re-publish this content with mandatory attribution: direct and active hyperlink to www.orangesmile.com.
Capri - guide chapters 1 2 3 4 5 6 7
Reference information
Map of all palaces

Public palaces near Capri
♥   Palace 'Palace of Portici' Portici, 31 km from the center. On the map

♥   Palace 'Royal Palace of Carditello' Caserta, 57 km from the center. On the map

Art galleries in Capri and around
♥   Art museum 'Archaeological Museum of the Campi Flegrei' Bacoli, 32 km from the center. On the map

Cathedrals and basilicas near Capri
♥   Ex cattedrale Santa Maria delle Grazie, Massa Lubrense, 10.9 km from the center. On the map

♥   Basilica di S. Antonio Abate, Sorrento, 14 km from the center. On the map

♥   Ex cattedrale Santissima Annunziata, Vico Equense, 19.8 km from the center. On the map

Unique spots in Capri and near 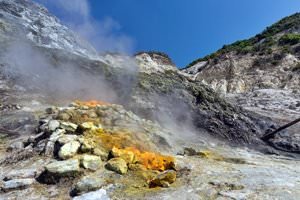 Distance from Capri center - 31.9 km.
Locals see how the cliffs level of the high changes from the vibrations of the earth layers. Even more the coastline goes closer and closer. Pozzuoli is a popular touristic place. There were found a lot of outstanding antique items. Tourists can order an interesting coastline excursion and see the drowned Seneca city. It went under the water within a short period of time. The reason was hidden in a vibration of the earth layers. Today tourists can see saved parts through the floor illuminators in the boat-cruisers. … Read further 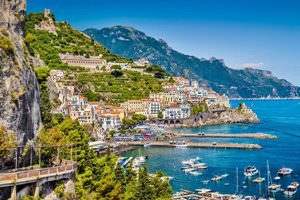 Distance from Capri center - 31.7 km.
Nevertheless the small size, Positiano is quite popular among tourists. There was saved an old church and a great number of hundreds of years old houses. There were opened mini-hotels with a traditional interior for tourists from the whole world. Amalfi is also a nice seaside town. The main symbol of the city is the Cathedral Church of 957 years. It was named in honour of the Gospel writer Andrew. … Read further 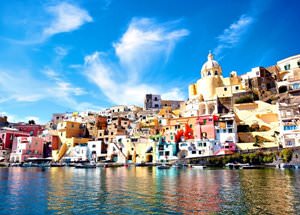 Distance from Capri center - 29.8 km.
There are just over 10000 people living on the island, its area is only 4.1 square meters. An islet has been formed as a result of volcanic activity. The first settlers on its territory appeared in the prehistoric era. Today, in addition to the colorful embankment, the ancient church of the Archangel Michael is of great interest to tourists. The inhabitants of the island consider him to be their patron. It is best to explore the island on foot. Here, you can see interesting sights at every step. … Read further

Photogallery of cultural heritage of Capri

Excursions over cultural sights of neighbours of Capri

Sorrento
Villa Comunale is among unique architectural monuments of these places. It is located in the picturesque area; during the tour, vacationers can enjoy beautiful panoramic views of surrounding places. Not far away is the Chiesa di San Francesco and a small monastery, also named after the saint. The monastery of San Francesco was built in the early 15th century. It features ... Open »
Procida Island
Visit the village of Coricella. It was here that some scenes of such famous films as "The Talented Mr. Ripley" and "The Postman" were shot. However, the settlement was founded a long time ago and in itself is a monument of history. The Church of San Rocco, built in the 15th century, can be called one of the most ancient local buildings. Here you can find many mansions of the ... Open »
Amalfi
Step inside the cathedral to see its marvelous inner décor. Besides, the cathedral keeps one of the most valuable religious artifacts in the region - the Apostle Saint Andrew relics. During your visit to the shrine, you can admire fabulous mosaics and stained-glass windows, take a look at old sculptures and icons, and see elements of the artistic design in detail. A small ... Open »
Atrani
Another interesting historic monument is the Church of San Michele Arcangelo located near Atrani. The construction of the church took place in the 11th-12th centuries on very difficult mountainous terrain. Initially, there was a cemetery on the site of the church. That's why it was built outside the city walls. One of the most massive burials took place here in 1656 when a ... Open »
Isola di Ischia
Take time to visit the Cathedral of Ischia. Next, to it, there is the beautiful Clock Tower, where the Museum of the Sea is located. Be sure to visit the Papal Basilica of the Madonna of Loreto and the Church of Saint Maria of the Snow of Soccorso in Forio. By the way, a dozen medieval towers that served to protect against the pirate raids have remained in the city. For a ... Open »
Agropoli
Speaking about Agropoli's sights, it is also necessary to mention its wonderful nature. The amazing marine parks of Infreschi and Santa Maria Castellabate attract thousands of outdoor enthusiasts every year. During a walk through picturesque places, you can see beautiful caves, marvelously beautiful lavender groves, as well as rare plant species and typical inhabitants of ... Open »

Culture guide to Capri. Which fascinating sights to visit once you are in Capri: temples, churches, museums, theaters and castles. Recommendations (with addresses, phone numbers and links) on the places 'must visit' in Capri. Plan your own city excursion by using this page info!