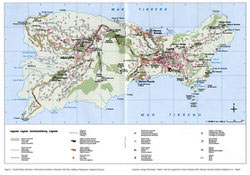 Interactive maps of hiking and biking routes around Capri

1. You can zoom in/out using your mouse wheel, as well as move the map of Capri with your mouse.
2. This interactive map presents two modes: 'Biking Routes' and 'Hiking Routes'. Use the '+' button on the map to switch between them.

This Capri map has two modes: 'Railway Network' and 'Landscape & Rural Map'. Use the '+' button on the map to navigate.

Our guide to Capri

The main advantages of Capri Island are enchanting beaches. The coast of the island has quite a complex structure. There are a lot of calm secluded coves that you can reach only by boat. Tourists can also visit beautiful pebble and artificial beaches of stone platforms here. Connoisseurs of modern comfort should choose the Marina Piccola Bay. There are several well-equipped beaches. At the coast, there are … Open

Marina Piccolla has to be mentioned among comfortable places. This pebble beach differs with modest size, but that doesn’t bother its customers. Isle of Capri is the unique resort area with parts of the coast suitable absolutely for everyone: romantic couples and families with children, the elderly and active travelers who want to spend every day of their vacations in a new way. Those who want to spend time … Open

Isle of Capri gained a reputation as an upscale resort, and it is safe to say that its exquisite culinary traditions fully comply with this status. The island is famous due to local cheeses; excellent mozzarella, caciocavallo and silano are produced here. Many gourmets buy local cheese as a gift for loved ones; local restaurants cook a lot of interesting dishes adding cheese. The island of Capri is famous for its … Open

Capri is a luxurious resort that enjoys continued popularity among international celebrities. Only two towns are situated on the island. The focus of elite entertainment, shopping, restaurants and beaches is the town of Capri. Ankapri is popular among travelers who wish to relax in tranquil and secluded ambience; it can also offer its guests numerous scenic beaches and attractive ways of spending their leisure time. … Open

Maps of Sorrento
Sorrento isn’t distinguished by an abundance of noisy entertainment venues, but the resort is sure to please fans of shopping, hiking and beach holidays. Fans of loafing and those who prefer to sunbathe in a secluded place would like the Punta del Capo Beach. Here you can perfectly relax all day long, enjoying the serenity and natural splendor. No less attractive is the ... Open »
Maps of Procida Island
If you like beach holidays and prefer beaches with golden sand, then you should go to the western part of the island. It is there that Lido di Procida is located. However, you can relax on the beach near Corricella, and on Pozzo Vecchio and Silurenza. Fans of active nightlife should keep close to the busy beaches: most of the parties that are held here during the holiday ... Open »
Maps of Amalfi
If you prefer the most stylish and exquisite venues, the L'Arsenale Bar deserves at least one visit. You can simply relax here, sipping your favorite wine, or can order the bar’s signature dishes with the finest seafood. The lounge bar has an attractive design. Its main hall mostly has light colors and is decorated with modern art. As a rule, visitors order various fruit ... Open »
Maps of Atrani
There are many interesting hiking trails around the city. You will have the opportunity to walk through indescribably beautiful mountain areas and visit the best observation platforms in the region. Fans of romantic entertainment should go for a walk at night when the city is decorated with wonderful lights. An evening boat cruise could become an interesting adventure. From ... Open »
Maps of Isola di Ischia
Fans of clubs and parties will not be disappointed either. There are enough places for night parties on the island. The largest and most famous clubs in the capital are Calise and Ecstasy, which you can find on the central Via Roma. The disco New Valentino is also popular. Many coastal cafes and restaurants work till late at night, and after sunset, they organizing dance ... Open »
Maps of Agropoli
Speaking about the sights of Agropoli, it is worth mentioning about the beautiful nature. The magnificent parks of Infresa and Santa Maria Castellabate attract thousands of fans of outdoor activities every year. During a walk through the picturesque places, you can see beautiful caves, marvelous beauty of lavender groves, rare plant species and inhabitants of these places - ... Open »
Maps of Isole Pontine
On any island, the easiest way to get somewhere is to walk. Only Ponza and Ventotene are populated in the whole archipelago but even they can’t boast to have a large territory. In Ponza, it is generally forbidden to use personal transport, so you only can rent a car here. However, for a comfortable journey around the island, there is enough public transport, and it is ... Open »
OrangeSmile.com - online travel reservation expert providing reliable car rental and hotel booking services. We feature more than 25.000 destinations with 12.000 rental offices and 200.000 hotels worldwide.
Secure Server