Detailed hi-res maps of Varese for download or print 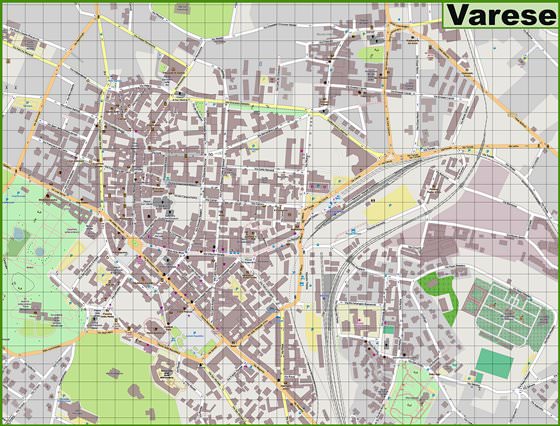 Search for services, infrastructure and sights on map of Varese

Our guide chapters over Varese

In Varese, there are several beautiful villas and mansions that deserve the attention of curious travelers. Villa Mirabello has been transformed into a museum that exhibits a priceless collection of archaeological artifacts. Some halls of the museum are dedicated to a collection of art, so visitors can see many precious works of famous medieval artists. Continue your acquaintance with works of local painters in the … Open

Travelers interested in religious landmarks and everyone keen on mountain paths are welcome to explore the ancient “Sacred Path”. The Sacred Path of the Chapels of the Rosary was created yet in 1604. The cobbled path was made to connect the 14 chapels that present the “Mysteries of the Rosary”. The building lasted almost a century, attracting many talented sculptors and architects. Excursions to Sacro Monte … Open

Ristorante Crotto Valtellina is one of the most romantic restaurants in Varese. It pampers its visitors with live music in the evening and a fabulous open-air terrace that is open in summer. Budget tourists will certainly like Golden Egg. A fantastic choice of pastries, sandwiches, snacks, salads, alcohol-free cocktails, and beverages is everything that hungry tourists need after long excursions in the city. Fans … Open

Traditions and mentality of Varese

The unusual location has also shaped the character of people who live in this area. The name Varese is of the Celtic origin – in the Celtic language “var” means water. Different nations passed the area of the modern city during its long history, bringing their own traditions and customs. Modern Varese residents are active, they like setting and achieving goals. Water has always been important to them due to … Open

Among the religious sights, it is worth highlighting the Basilica of San Vittore. Its construction began in the late 16th century and lasted for more than 150 years. Today, the Basilica has preserved several chapels which were built in different periods. The Basilica is unique from the architectural point of view the monument; it is wonderfully combines elements of various architectural styles. The bell tower … Open

Varese for children - what to visit

Another original cultural center which will certainly appeal to young visitors is the Museo Castiglioni. In this museum which occupies a beautiful historical building, a rich collection of archaeological artifacts is collected. Here you can see fragments of stone on which images of animals and ancient writings are carved, as well as fragments of rock art. A significant part of the collection is dedicated to the … Open