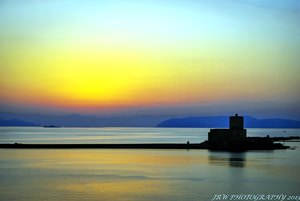 Santuario Dell Anunziata remains the main historical symbol of Trapani. It is also famous under the following names: the Basilica-Sanctuary of Maria Santissima Annunziata or just “Madonna of Trapani”. The building of the first church on the site of the basilica started in 1315, but the church was ready only in 1332. The modern basilica is a harmonious combination of different architectural styles – that is quite typical for architectural landmarks in Sicily. In the design of the gorgeous basilica, it’s easy to notice elements of Gothic and Renaissance styles that are skillfully mixed with oriental motifs. The magnificent statue of Madonna that dates back to the 14th century is, without a doubt, the main relic of the basilica. Famous Italian sculptor Nino Pisano is the author of the sculpture. There is an interesting story of how the statue appeared in the basilica. It was a gift of a Pisan knight who found shelter and protection from the chase on the sacred land. For many centuries, the gorgeous basilica has been an important national symbol for all inhabitants of the city. Needless to say, it is the traditional venue for celebrations during various religious holidays.
Family holidays with kids in Trapani. How to entertain your child, things to show to children.
There are not too many specialized children's activities in Trapani. It will be better to go here in the summer. You and your child can go to one of the two beaches close to the city to …

Open
Travelers keen on the antique history will be more than pleased with their visit to Museo Pepoli. This museum exhibits collections of priceless archaeological artifacts that mostly belong to the ancient Greece and Rome epochs. A part of the museum has been transformed into a picture gallery that exhibits works of the most famous Sicilian artists. There are halls with unusual items, for example, the exhibition of handmade coral goods and decorations. Several hundred years ago, coral items were worth their weight in gold and were extremely popular with foreign merchants. Nowadays, it’s prohibited to make souvenirs from corals, so it’s only possible to look at these items in the museum.
Simply no traveler in Trapani can fail to visit Vittorio Emmanuele Square that is also the beginning of one of the most famous streets of the city - Corso Vittorio Emmanuele. This part of Trapani is rich in architectural landmarks with Palazzo della Gidecca being one of the most famous. It’s hard not to notice the palace as it has a very eye-catching décor of the façade. In the 17th – 19th centuries, only the wealthiest people in Trapani could build their mansions on that street. There is also an important landmark nearby - Church of Purgatorio. This church is famous because of ancient statues that are exhibited inside. During the Holy Week, these statues are taken outside for a solemn procession on the central streets of Trapani. Copyright www.orangesmile.com
Cuisine of Trapani for gourmet with top restaurants and cafe
More than a hundred restaurants are open in Trapani today. Traditional Sicilian dishes are served in them. The cuisine of the region is multi-faceted and diverse due to the mixing of various …

Open
One of the most notable landmarks of the 17th century, Cathedral of San Lorenzo is another must-visit place. When describing the oldest buildings in Trapani, it is important to mention Church of St. Francis of Assisi. This church dates back to the 13th century and is famous for an important historic artifact – an ancient tombstone with inscriptions in Latin and Armenian. There are several theories about this tombstone. In accordance with one of them, members of the Armenian diaspora, who lived in Trapani, made the first religious landmark on the site of the church. 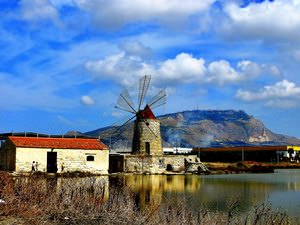 Not everyone knows that salt has been one of the main symbols of Trapani. Actually, it was the “white gold” that fastened the prosperity and development of the city. The Phoenicians were the first ones to start the production of salt in this region. Nowadays, ancient salterns have become another landmark of this wonderful city. The ancient salterns are large complexes, many buildings in which are still in a good condition. During an excursion in this place, visitors will see old mills and pools used to extract salt from the sea water. There is even a museum dedicated to salt, Museo del Sale, an excursion in which will be no less entertaining. The exploration of magnificent landmarks of Trapani promises to become an unforgettable adventure.

In the section below, you can get one of our excursion, activities or city discovery tours over Trapani and surroundings. Our website offers 10-30% lower ticket prices, when compared to the offline purchase on the spot.

This guide to cultural sights Trapani is protected by the copyright law. You can re-publish this content with mandatory attribution: direct and active hyperlink to www.orangesmile.com.
Trapani - guide chapters 1 2 3 4 5 6 7 8 9
Reference information
Map of all churches

Cathedrals and basilicas near Trapani
♥   Basilica S. Nicolò, Trapani, 2 km from the center. On the map

Photogallery of cultural heritage of Trapani

Excursions over cultural sights of neighbours of Trapani

Favignana Island
There is a monument to an elderly man in a suit of the 19th century near the city council on the main square. It is Ignazio Florio who left a mark in the history of the island. He owned a tuna reprocessing plant built by Florio family in the 17th century. The plant had innovative and modern equipment for those times. The plant brought enough money and Ignazio bought Favignana ... Open »
Aegadian Islands
You will never meet an Italian on the Aegadian Islands who is dressed inappropriately. Nobody will ever go to work in jeans. You will never meet an official in trainers or a baker in a suit on Favignava. A sailor will never wear an expensive brand suit. A housewife will never go to a shop in home clothes. Locals wear clothes appropriate for the situation. Even a package for ... Open »
Palermo
Another remarkable landmark of Palermo is the Porta Nuova. The gate serves as a symbolic entrance to the historical center of the city. The gate was built in the second part of the 17th century. The construction presents a complex architectural composition of ingenious statues, large stanzas and pyramid shaped cupola. The most remarkable and significant historical landmark of ... Open »
Ustica Island
Carthaginians have inhabited the island. Greeks called the island Osteodes, which means «Crypt». This name was given to the place in the 4th century BC because thousands of the rebellious inhabitants of Carthage were left to die here. Unfortunately, there are no remains of Carthaginians necropolis on the island. Romans gave to Ustica its modern name, which can be ... Open »
Sicily
Among religious objects, Cathedral of the Assumption of the Virgin Mary is worth mentioning. It is the burial place of the kings of Sicily. In addition to the sarcophagus, former rulers kept a priceless collection of jewelry in the cathedral; now it can be evaluated by all comers. According to one of the versions, the cathedral was built on the site of prehistoric places of ... Open »
Agrigento
Temple of Olympian Zeus is one of the most notable antique attractions in Agrigento. The giant temple dedicated to Zeus was never completed. The city suffered from several alien invasions, and later the temple was severely damaged during an earthquake. Nevertheless, even the restored fragments of the building look very impressive. Archaeologists also discovered an antique ... Open »

Culture guide to Trapani. Which fascinating sights to visit once you are in Trapani: temples, churches, museums, theaters and castles. Recommendations (with addresses, phone numbers and links) on the places 'must visit' in Trapani. Plan your own city excursion by using this page info!