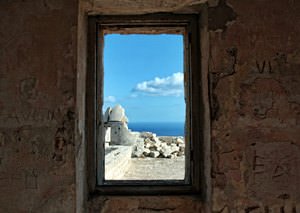 The lifestyle of Favignana inhabitants hasn’t changed a lot since the times when people explored the world by boats and electricity seemed impossible for humans. In fact, local settlements haven't changed since medieval times. There are still narrow intertwining streets which were built in order to puzzle enemies. There are still small cosy houses which bricks remember several generations of local fishermen. In short, local houses themselves are historical landmarks.
Best beaches and recreation areas around Favignana Island
All the island's beaches without exception have very relaxed atmosphere; there is nothing to prevent enjoying the pristine beauty of nature. One of the most picturesque places on the island …

Open
There is a monument to an elderly man in a suit of the 19th century near the city council on the main square. It is Ignazio Florio who left a mark in the history of the island. He owned a tuna reprocessing plant built by Florio family in the 17th century. The plant had innovative and modern equipment for those times. The plant brought enough money and Ignazio bought Favignana Island and all the other parts of the Aegadian Archipelago in 1876. The life of the local fishermen changed for the better because of Ignazio. So, the locals build a monument in honour of their patron.
The Isola Di Favignana will be a nice holiday destination for those who are interested in modern times, the industrial revolution and industry in general. The fact is that the factory of the Florio family, where were all tuna caught in the waters of the Aegadian Islands in the 17th century, is well preserved now. Of course, it doesn’t function anymore, but, nevertheless, many appliances, tools and machines are left untouched. And the building itself, built more than three centuries ago, is of great interest. In addition, the Florio factory is often used by local authorities as an exhibition space. Copyright www.orangesmile.com
Top hotels in Favignana Island for business trip or short vacation
The most famous and popular hotel, Florio, is situated on the main square of the capital. It will surprise even those travelers who like to rest at the most luxurious resorts. The main …

Open
One more important attraction on Favignava is the castle of Santa Caterina. The castle is located on the peak of Mount Santa Caterina. Its peak is 310 meters high and it provides amazing views of the island. The Castle was built in the 10th century by Saracens and it was besieged and destroyed several times. Later, the Saracens left the castle and new owners decided to expand the tower and build a castle. In the 15th century, Andreo Riccio, the ruler of Favignana, rebuilt the fortification again and it acquired the present look. The castle was built using local limestones and its name derives from the small church that Normans rose near the castle to honour Santa Caterina. Scientists believe that the castle was rebuilt from the scratch for several times. Now the fortress is quite well-preserved for its age. 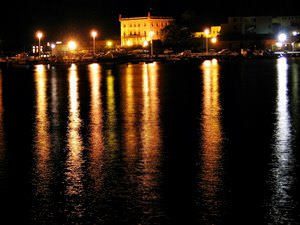 Every person can visit the fortress for free. You can explore its full area: from the upper terrace to the underground prison. But you should be careful, the construction doesn’t have safe ladders and there are no fences on the upper observation decks. You can see not only the preserved rooms and corridors with the remains of antique furniture, doors and windows inside the fortress but also a real military radar which doesn’t function now. If you are tired of walking along the corridors of the fortification, come back to the capital and visit the Tuna Processing Museum. You will get new information about fishing on the island here.
Shopping in Favignana Island - main shopping streets, outlets and boutiques
Be sure to bring a Pinnocio from Favignava. The doll is a national Italian symbol. You can buy it in any size, from a keychain or magnet to a big toy in human growth. Pinocchio is something …

Open
There are several old churches on the island. Some of these cult buildings stand in its place for 3-4 centuries. If you haven't tired of tuna and its presence on the island, be sure to visit nearby Tonara island. It was something like a transhipment base for local fishermen for several centuries. A well preserved old plant of salt production, several medieval windmills are a good proof of it.

In the section below, you can get one of our excursion, activities or city discovery tours over Favignana Island and surroundings. Our website offers 10-30% lower ticket prices, when compared to the offline purchase on the spot.

This guide to cultural sights Favignana Island is protected by the copyright law. You can re-publish this content with mandatory attribution: direct and active hyperlink to www.orangesmile.com.
Favignana Island - guide chapters 1 2 3 4 5 6 7 8 9
Reference information
Map of all churches

Cathedrals and basilicas near Favignana Island
♥   Basilica S. Pietro, Trapani, 18.3 km from the center. On the map

Excursions over cultural sights of neighbours of Favignana Island

Aegadian Islands
The family is usually ruled by a grandmother, but not a grandfather. Women are often leaders of their family but men don’t want to accept this fact. Men like to pay a compliment to women, regardless of their age, education and built. If you want to increase your self-esteem, the islands are the perfect place for you. It may seem that Italian men have learned to flirt with ... Open »
Trapani
Santuario Dell Anunziata remains the main historical symbol of Trapani. It is also famous under the following names: the Basilica-Sanctuary of Maria Santissima Annunziata or just “Madonna of Trapani”. The building of the first church on the site of the basilica started in 1315, but the church was ready only in 1332. The modern basilica is a harmonious combination of ... Open »
Palermo
Tourists choose the Quattro Canti architectural complex as a starting point of exploration of landmarks and sights of Palermo city. Its name can be literally translated as Four Corners. The complex encompasses four buildings which are located by the sides of a crossroad. The construction of the buildings was held in the 17th century. The buildings are executed in baroque style ... Open »
Ustica Island
Ustica is a small island in the Tyrrhenian Sea. It is just 9 kilometres wide. Despite the fact, that its population is less than one and a half thousand people, the island is rich with historical attractions. Scientists believe that the first settlers came from the Aeolian Islands and inhabited Ustica long ago. One more evidence is ruins of the ancient settlement existed in ... Open »
Agrigento
Temple of Olympian Zeus is one of the most notable antique attractions in Agrigento. The giant temple dedicated to Zeus was never completed. The city suffered from several alien invasions, and later the temple was severely damaged during an earthquake. Nevertheless, even the restored fragments of the building look very impressive. Archaeologists also discovered an antique ... Open »
Hammamet
Hammamet is considered the most picturesque resort in the country. Its most distinguishing feature is its unique nature. The main historical attraction of the city is the Medina of Hammamet; it is an incredibly beautiful complex of old buildings. The Medina is 300 meters long and 100 meters wide; you can get to it through one of the four gates. In the center there is the ... Open »