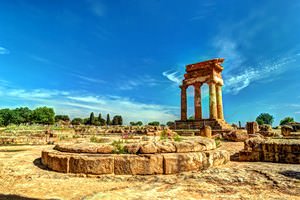 Agrigento is one of the leaders in terms of the number of unique landmarks among other Sicilian cities. Tourists can see inimitable antique attractions and medieval buildings here. Of course, local museums deserve a visit too. Valle dei Templi or Valley of the Temples is a worldwide famous attraction. Some of the most interesting antique attractions are located in this archaeological site. Tourists can see an ancient necropolis, explore an antique forum and fragments of protective walls, and take a closer look at several temples. More than two thousand years ago, this area was the center of a large and prosperous city full of luxurious palaces and temples. The majority of buildings that have survived to this day were constructed in the 5th – 6th centuries BC.
Shopping in Agrigento - main shopping streets, outlets and boutiques
Shopping should be a mandatory part of any vacation in Agrigento. There are many attractive shops in the city, where visitors can find stylish clothes and shoes, as well as accessories for …

Open
Temple of Olympian Zeus is one of the most notable antique attractions in Agrigento. The giant temple dedicated to Zeus was never completed. The city suffered from several alien invasions, and later the temple was severely damaged during an earthquake. Nevertheless, even the restored fragments of the building look very impressive. Archaeologists also discovered an antique statue of King Telamon here. It was decided to install it in the center of the architectural complex. The statue is 8 meters tall, and it’s a miracle that it has survived to this day.
Besides the legendary antique attractions, pay your attention to landmarks of the medieval period. Cattedrale di San Gerlando remains the main religious symbol of Agrigento. This gorgeous cathedral dates back to the 11th century. The church suffered much damage in the mid-13th century due to the landslide. The reconstruction works were finished only four centuries later. The cathedral changed its look and got some Baroque elements in the 17th century. Today, Cattedrale di San Gerlando is a church that not only looks impressive but also has a fabulous inner design. The shrine was partially damaged during an earthquake in 1966, but later it was thoroughly restored in strict accordance with its historic look. Among the most interesting elements of inner décor, it is important to mention the medieval nave and the wooden ceiling that dates back to the 15th century. The cathedral exhibits many precious artifacts including relics of patron saints. Copyright www.orangesmile.com
Guide to Agrigento sightseeing - things to see and to visit
If you plan a vacation on Sicily, consider including a visit to Agrigento as this city definitely deserves the attention of tourists. This is the capital of the province with the same name …

Open
Chiesa Santa Maria dei Greci is a prominent landmark in Greek-Byzantine style. The construction of the shrine took place in the 13th century. Chiesa Santa Maria dei Greci was built on ruins of an ancient temple. The church hasn’t got any significant damages over the centuries, so it still features many interesting elements in the Gothic style. Magnificent frescos are the main decoration of the church. Most of them were made yet in the 14th century. Enter the church to see amazing medieval sculptures of saints. 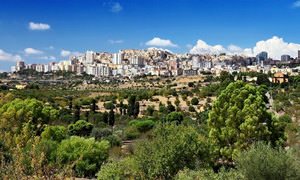 Chiesa San Calogero, which dates back to the 13th – 14th centuries, is one more gorgeous shrine in Agrigento. This church has one very unusual element – an ancient altar that was made in the 14th century. Made from black rosewood and orange tree bark, the altar is a true masterpiece. Chiesa San Calogero also features many precious artifacts including gilded mosaics and elements of décor made from rare sorts of wood.
Your active city break in Agrigento. Attractions, recreation and entertainment - best places to spend your day and night here
Having explored the main local attractions, don’t forget to visit Giardino Botanico di Agrigento. This botanic garden occupies an area of almost 7 hectares, and so it is easy to spend …

Open
When it comes to museums and other cultural establishments in Agrigento, Museo Archeologico is definitely the most visited venue. The museum opened in the 60s of the previous century. It is located in the heart of the historic district. A significant part of the exhibited items belongs to the Hellenistic period in the history of Agrigento. The oldest artifacts in the collection date back to the 15th century BC. A collection of ancient tableware and statuettes is considered a true gem of Museo Archeologico. Ritual weapons that local people used more than 2,500 years ago also draw the attention of guests. The museum building is located at some elevation, offering picturesque views of the historic quarter. 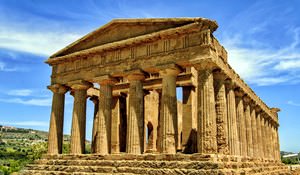 Do not miss an opportunity to visit Gems Museum – this is one of the most marvelous attractions in Sicily. Precious stones and fine jewelry made in different periods are the main exhibits in this museum. An excursion to Gems Museum is not only interesting but also educative. You will learn how to distinguish real precious and semiprecious stones from fakes and even try to use the equipment of professional jewelers. Finally, it would be a mistake to forget to mention Museo Diocesano, the collection of which started forming in 1958. Today, this museum exhibits interesting collections of religious artifacts and artworks from local churches.

In the section below, you can get one of our excursion, activities or city discovery tours over Agrigento and surroundings. Our website offers 10-30% lower ticket prices, when compared to the offline purchase on the spot.

City tours, excursions and tickets in Agrigento and surroundings

This guide to cultural sights Agrigento is protected by the copyright law. You can re-publish this content with mandatory attribution: direct and active hyperlink to www.orangesmile.com.
Agrigento - guide chapters 1 2 3 4
Reference information
Map of all churches

Cathedrals and basilicas near Agrigento
♥   Cattedrale di S. Maria La Nova, Caltanissetta, 46.7 km from the center. On the map

♥   Basilica di S. Agata, Montemaggiore Belsito, 61.7 km from the center. On the map

Photogallery of cultural heritage of Agrigento

Excursions over cultural sights of neighbours of Agrigento

Sicily
Among religious objects, Cathedral of the Assumption of the Virgin Mary is worth mentioning. It is the burial place of the kings of Sicily. In addition to the sarcophagus, former rulers kept a priceless collection of jewelry in the cathedral; now it can be evaluated by all comers. According to one of the versions, the cathedral was built on the site of prehistoric places of ... Open »
Palermo
In the middle of the 19th century the palace was surrounded with a large park which is nowadays among the most attractive and remarkable natural sights of the city of Palermo. The square of the park is about 60ha. Its visitors get a unique chance to observe and enjoy plenty of aged trees and antique statues. The same interesting and attractive for tourists is the Palazzo dei ... Open »
Trapani
One of the most notable landmarks of the 17th century, Cathedral of San Lorenzo is another must-visit place. When describing the oldest buildings in Trapani, it is important to mention Church of St. Francis of Assisi. This church dates back to the 13th century and is famous for an important historic artifact – an ancient tombstone with inscriptions in Latin and Armenian. ... Open »
Favignana Island
There are several old churches on the island. Some of these cult buildings stand in its place for 3-4 centuries. If you haven't tired of tuna and its presence on the island, be sure to visit nearby Tonara island. It was something like a transhipment base for local fishermen for several centuries. A well preserved old plant of salt production, several medieval windmills are a ... Open »
Catania
The old chapel and the frescoes of the 18th century are considered the main decorations of the church. There is also a secret room in the cathedral. This room stores the main artifact - a golden statue of St. Agatha. Travellers will find three small churches near the cathedral. All the churches are also dedicated to St. Agatha. Ursino Castle is another unique historical object ... Open »
Aegadian Islands
The family is usually ruled by a grandmother, but not a grandfather. Women are often leaders of their family but men don’t want to accept this fact. Men like to pay a compliment to women, regardless of their age, education and built. If you want to increase your self-esteem, the islands are the perfect place for you. It may seem that Italian men have learned to flirt with ... Open »

Culture guide to Agrigento. Which fascinating sights to visit once you are in Agrigento: temples, churches, museums, theaters and castles. Recommendations (with addresses, phone numbers and links) on the places 'must visit' in Agrigento. Plan your own city excursion by using this page info!