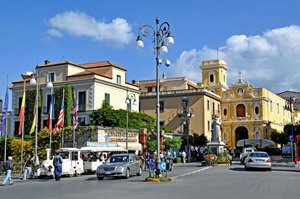 Sorrento is the city with an amazingly beautiful scenery and harmonious atmosphere. It never ceases to attract artists and fans of rest in beautiful places. During leisure travelers will find a lot of surprises, because in addition to the flawless appearance a popular resort features its incomparable flavor. The main symbol of the city is a lemon. Local fruits differ much from those to which people in other countries are accustomed. Lemons are very big and incredibly tasty, and many travelers buy them as gifts for loved ones. Lemon trees can be seen literally everywhere in the city, they exude a pleasant aroma.
Excursion over cultural sights of Sorrento - 'must visit' points of interest
The famous landmark of Sorrento is the Basilica di San Antonio. It was built in the 11th century on the site of a small chapel; now it has an interesting collection of works of art. Visitors …

Open
With the name of the town some beautiful legends are associated. According to one of them, first settlers of this area were Phoenicians; they gave the city its name. It is believed that it was formed from the word ‘sireon,’ which means ‘the land of Sirens.’ First inhabitants of the city believed that mermaids, or sirens, have lived in these places. Their divine songs have attracted sailors to the island; subsequently they couldn’t keep themselves from staying in that picturesque area. That is the legend described by Homer in his Odyssey.
Sorrento is famous for its wine-making traditions. Local wineries produce liquors and wines following ancient traditions. Common souvenir for tourists is Limoncello liquor produced from local fragrant lemons. A true national drink is Lacrima Christi wine; the symbol of Sorrento also has its own unique story. Copyright www.orangesmile.com
Your active city break in Sorrento. Attractions, recreation and entertainment - best places to spend your day and night here
Sorrento isn’t distinguished by an abundance of noisy entertainment venues, but the resort is sure to please fans of shopping, hiking and beach holidays. Fans of loafing and those who …

Open
According to the legend, God was so upset with evil-minded people that uttered a tear. It fell at the foot of the volcano and soon a vine sprouted near Vesuvius. Today, tourists are invited to stroll through the legendary vineyards and appreciate impeccable taste of local wine with a beautiful name. The old factory Capo di Monti, which produces interesting porcelain, also operates in Sorrento. You can buy it in specialty stores or directly at the factory; you would be fond of figures of exquisite beauty and quality. Talking about cultural traditions of the city, it’s certainly worth to mention Musical Summer in Sorrento. It takes place every year and always attracts a large number of foreign guests.

This guide to traditions and festivals in Sorrento is protected by the copyright law. You can re-publish this content with mandatory attribution: direct and active hyperlink to www.orangesmile.com.
Sorrento - guide chapters 1 2 3 4 5 6

City tours, excursions and tickets in Sorrento and surroundings

Cathedrals and basilicas near Sorrento
♥   Basilica di S. Antonio Abate, Sorrento, 0.2 km from the center. On the map

♥   Ex cattedrale Santissima Annunziata, Vico Equense, 5.8 km from the center. On the map

♥   Basilica di S. Maria Assunta, Castellabate, 9.4 km from the center. On the map

Survived castles around Sorrento
♥   Castle 'Vigliena Fort' Naples, 24.5 km from the center. On the map

♥   Castle 'Castello del Parco' Nocera Inferiore, 26.4 km from the center. On the map

Unique landmarks in Sorrento and around

Distance from Sorrento center - 22.1 km.
The eruption that happened in ancient times was described as a real apocalypse. Within hours, cities located near the volcano were hidden under a layer of ash. The sun was completely blocked by clouds of volcanic dust. The darkness reigned over the ancient Roman city. The massive eruption resulted in the formation of the caldera of incredible size, which is about 15 km in diameter. People have been watching the activity of Vesuvius for hundreds of years. According to historical data, it has erupted 80 times over the last 2 000 years. … Read further

Distance from Sorrento center - 22.3 km.
Vesuvius is not only one of the most active, but also one of the oldest volcanoes of the planet. According to the preliminary version, it had formed in the 7th millennium BC. In the late 19th century there has been built funicular, which immediately became one of the most popular tourist attractions of the region. In 1944 there was the last major eruption of the volcano, which completely destroyed not only the funicular, but two cities, Massa and San Sebastiano. … Read further

Colors of Sorrento in photos

Traditions and festivals in cities around Sorrento

Naples
There is a belief that local people of Naples are more passionate about granita than about traditional Italian pasta. The ethnic drink is served in almost every café and sold in special concession stands located in the central streets of the city. Apart from culinary talents and peculiarities local people feature extreme passion to gambling games and lotteries. Almost ... Open »
Procida Island
The Italians are very emotional. In communication, they like to actively gesticulate and raise their voices to such an extent that sometimes it feels like the words were locked up, and now they are bursting into freedom. The locals also admire women with all their passion. It is accepted to admire and give compliments to every member of the fair sex, regardless of her ... Open »
Isola di Ischia
The inhabitants of Ischia are religious. The overwhelming majority of the population is Catholics, which, however, does not prevent them from being very superstitious. On the first week of September, they hugely celebrate the day of St. Giovanni Giuseppe on the Cross, who is the patron of not only the capital but together with St. Restità, the patron of the whole island. ... Open »
Agropoli
Moreover, Agropolis has very interesting and ancient traditions. Almost every day, you will be able to enjoy the bright puppet shows in the central city square. This tradition has a hundred years, and even today these shows have not lost their value and attract a lot of tourists annually. Another fascinating "national performance" is the process of cooking a caramel. Dexterous ... Open »
Isole Pontine
If somebody gave you a gift, then the rules of good taste suggest the need to open it in front of a person, who gave it to you. They appreciate the ability to enjoy life. In general, the locals may seem careless and frivolous, but in reality it is completely different. It's just that it's not accepted to strain more than the situation requires. The Italians are very ... Open »
Lazio
One of the most beautiful and oldest national holidays in the region is the Macchina di Santa Rosa; it takes place every year on September, 3 in the picturesque town of Viterbro. The festival is dedicated to the patron saint of the city; this event is more than 750 years old. The solemn procession begins promptly at 9:00 pm at the Church of St. Damian housing an ancient statue ... Open »

Cityguide on traditions, mentality and lifestyle of people in Sorrento. Learn the best periods to visit Sorrento to discover its soul - authentic festivals, events and celebrations. We will also reveal the interesting habits, attitude towards the world and to tourists in Sorrento.