Detailed hi-res maps of Sardinia for download or print 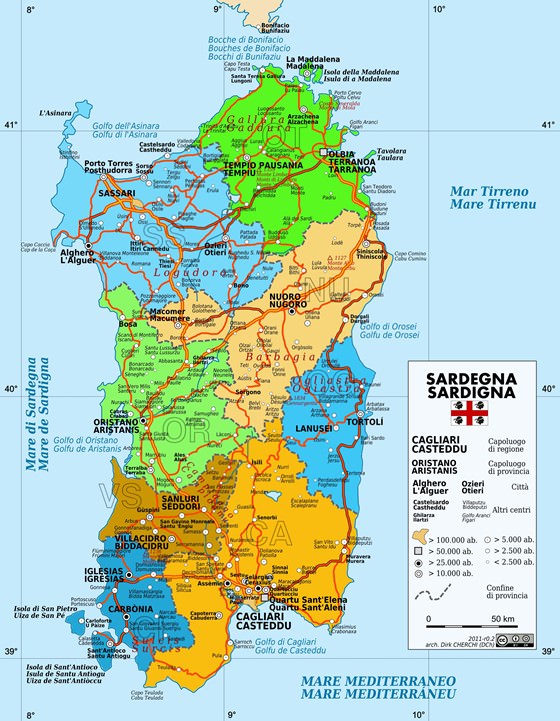 Search for services, infrastructure and sights on map of Sardinia

Our guide chapters over Sardinia

Those fond of elite sports are recommended to visit local golf clubs that will delight even the most demanding and experienced athletes. The most popular sports clubs are located near Pula, which is famous for its picturesque nature. Those are Arenas, Pevero and Is Molas resorts, which are well known to golfers from around the world. Fans of noisy and busy environment would enjoy Cagliari. Among its main tourist … Open

In addition to agriculture, the island is famous for its livestock, so travelers would have an opportunity to taste delicious dairy products and meat specialties. The local menu is based on bread, milk, meat and cheese, as well as seasonal vegetables; chefs cook incredible culinary masterpieces of those ingredients. Pecorino is produced in Sardegna; it is a true delicacy made of selective sheep milk. Lamb is … Open

Traditions and mentality of Sardinia

Each year, Quartu Sant’Elena hosts Sciampitta Festival that got its name from the old local dance. In 1985, the festival gained international status. Today, it is attended by dance groups from different countries. The festival takes place in mid-July and lasts for five days; its program includes dancing performances and other events associated with the culture of the island in one way or another. Fans of … Open

The core of all the programs offered by all wellness centers in Sardinia is balneological procedures. The health center of the Pelican Beach Resort&Spa is popular with the adherents of the healthy lifestyle. Its clients have an opportunity to consult professional specialists on dietary food. They can master yoga and try innovative programs that are aimed at cleansing the body. Despite the fact that such type of … Open

2. The vast part of island’s coastline is occupied by hotels. As a rule, each institution has its own beach fully equipped for a comfortable stay. Public beaches usually have no equipment, but you can rent it. 3. Thrifty travelers should pay attention to hotels in the southern part of the island. They differ with quite attractive prices and ample infrastructure; many tourists even don’t leave their … Open

The main tour object of the capital is the Roman amphitheater, a prehistoric building that has perfectly preserved to this day. Thousands of years ago, gladiator fights and horse races watched by thousands of spectators have been held on this grand arena. Palazzo d'Albios located in the small town of Alghero is notable too. Built in the 16th century, the cathedral is not only impressive in appearance, but also has … Open