Detailed hi-res maps of Corse for download or print 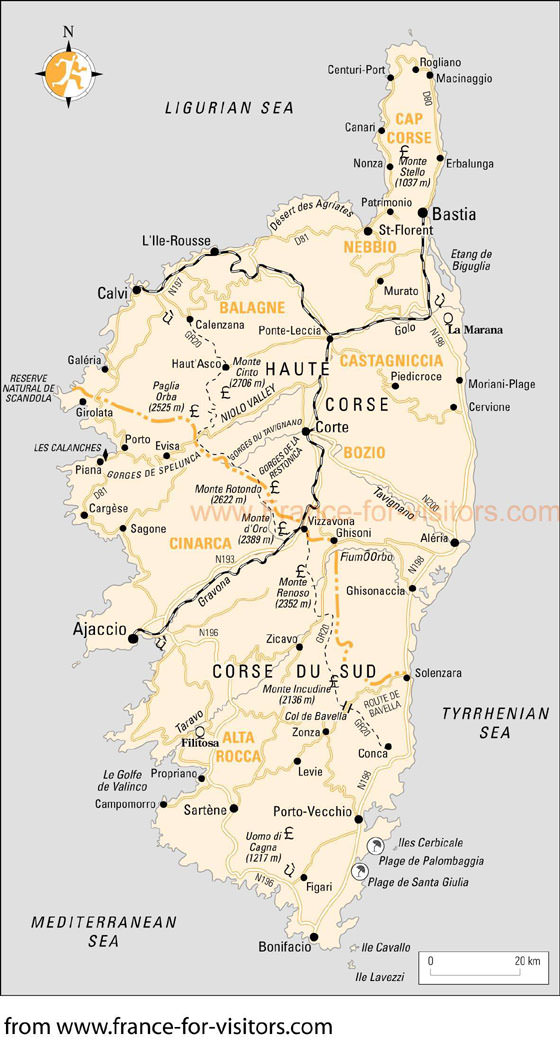 Search for services, infrastructure and sights on map of Corse

Our guide chapters over Corse

Corsica is a real godsend for those who enjoy scenic walks and prefers outdoor activities. In the eastern part of the island there are beautiful chestnut groves. Anybody who wants to is invited to walk through the nature reserve. During a tour, vacationers have a great opportunity to appreciate the diversity of local flora and fauna. The most famous is Buguglia natural reserve, not only visitors, but also locals like … Open

The place of honor in the national cuisine is occupied by seafood. Almost every Corsican restaurant serves it. The most famous fish market is located in Ajaccio, chefs from all over the island come here to buy fresh tuna, skate and trout, as well as more exotic delicacies. Fans of classic dishes may order fish cooked following the most original recipes. Fans of the more exotic treats would like anchovies and … Open

Traditions and mentality of Corse

To get acquainted with the culture and traditions of local people you have to visit one of their national holidays. Every year in Corsica interesting festivals and religious celebrations, competitions and fairs are held. No matter what is the subject of a holiday, it is always accompanied by performance with folk music, dancing and tasting of special treats. Every year, on August 12, a competition of bell ringers … Open

Corsica is famous for its natural attractions. The valley of Calanche de Piana is of great interest. Here, travelers can admire the beautiful granite rocks with red peaks. Some of them have a very unusual shape, so you can barely belief this shape is of natural origin. The height of some rocky peaks is 300 meters. According to geologists, this valley was formed over millions of years ago under the influence of wind … Open

A family vacation on the Island Of Beauty (as Corsica is often referred to) will appeal to every family member. In any part of the island, there are places that are definitely worth visiting with the kids. Corsica boasts a great variety of sights - both man-made ones (architectural, historical, cultural and religious) and those created by mother nature (mountains, forests, cliffs, streams). Together with kids, … Open

Corsica delights its guests with a variety of interesting specialty stores. In Satrene, near Hotel U Listincu, there is an excellent store specializing in essential oils. This store sells oils of the famous brand Michèle Pantalacci. Customers can choose wonderful citrus, lavender, and juniper oils, as well as various caring cosmetics based on them. For fans of aromatherapy and natural cosmetics, this store will be a … Open