Detailed hi-res maps of Olbia for download or print 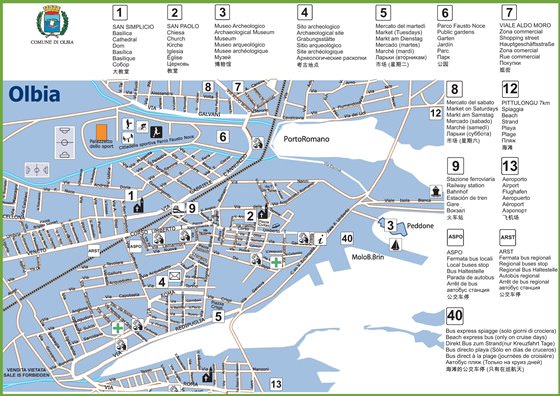 The actual dimensions of the Olbia map are 2749 X 1943 pixels, file size (in bytes) - 1034827. You can open this downloadable and printable map of Olbia by clicking on the map itself or via this link: Open the map. 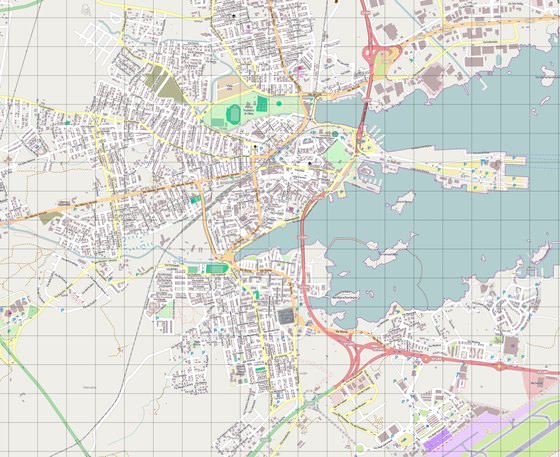 The actual dimensions of the Olbia map are 3062 X 2501 pixels, file size (in bytes) - 1651640. You can open, download and print this detailed map of Olbia by clicking on the map itself or via this link: Open the map.

Search for services, infrastructure and sights on map of Olbia

Our guide chapters over Olbia

The Basilica of San Simplicio is the main religious sight in Olbia. The shrine is dedicated to Saint Simplicio, the first bishop in the region. Many local people still honor him and consider Simplicio the city’s patron saint. The church was built in the 11th century. This is a fabulous example of the Romanesque Pisan architectural style. The shrine is comfortably located on a high hill, so it is not hard to … Open

Maps of Ajaccio
Local people honor old customs and traditions, especially those that are connected to the great French commander - Napoleon Bonapart. That's why all the residents of Ajaccio loudly celebrate his birthday on August 15. Everything here is reminiscent of Napoleon, like monuments and busts at every corner. Therefore, for local residents of Ajaccio, the Emperor's Birthday is a ... Open »
Maps of Corse
Early April in Bastia is dedicated to the annual comic book festival called BD À Bastia. At this time, in Centre Culturel Una Volta, visitors can see people wearing costumes of their favorite heroes, meet comic book illustrators, take part in workshops and just have fun. Festival visitors will be able to enjoy all of the above activities for three days. Each year, a new ... Open »
Maps of Cagliari
Among national holidays celebrated in Cagliari (and across Sardinia), Easter (Semana Santa) and Christmas (Natale) are the most popular. Easter is a family holiday. In the morning, locals usually visit church for a special festive mass. Before Christmas (namely, at the beginning of December), Fiera Internazionale della Sardegna hosts Fiera di Natale, which is a wonderful ... Open »
Maps of Bastia
Tourists, who want to listen to authentic music of the region, should attend a concert of traditional polyphonic music. Once almost forgotten, Corsica’s polyphonic music has become very popular in recent years. Groups of three or four people sing a cappella or with an accompaniment of strings, percussion or flute. Singers use voice as a musical instrument, and everyone has ... Open »
Maps of Elba Island
People in Elba like to party and they know how to. On May 5th they celebrate the Day of Napoleon Bonaparte, who had lived on the island for several years. After the festive service, the costume procession goes from The Church of Mercy to the Villa Mulini. On July 14th in Capoliveri commune, they celebrate Maria’s love for Lorenzo. According to the legend, five centuries ... Open »
OrangeSmile.com - online travel reservation expert providing reliable car rental and hotel booking services. We feature more than 25.000 destinations with 12.000 rental offices and 200.000 hotels worldwide.
Secure Server