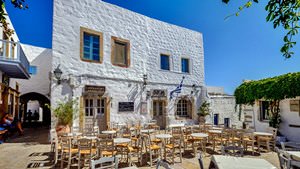 Feta cheese, wine, olives, vegetables, seafood, and meat are the most important ingredients of Greek cuisine. On Patmos, as well as on all other resort islands, there is a big difference between food for tourists and dishes "for their own". Therefore, if you want to touch the Greek cuisine in its original form, it is best to find a tavern away from the port areas, where most of the visitors will be the local Greeks. The service in such places is usually not too fast but they cook here according to the traditional recipes and there is less risk of finding "extra" dishes in the bill or facing not fresh food.
Authentic traditions, festivals and lifestyle of Patmos Island inhabitants
The Greeks are a very hospitable people, and the vacation on Patmos will appeal to all those who enjoy life. After all, where else can you be so distracted from work as where almost no one …

Open
The easiest way to understand if you are in a "tourist" tavern or not is to look at the menu. If you see there "home" or "rural" and not "Greek" salad – it means that here they cook for their own. Tomatoes, cucumbers, green peppers, onions, olives – that's far from a complete list of ingredients included in the village salad. In every place they make it in different ways, and so you can safely order this dish in different taverns for comparison. Another traditionally Greek dish is moussaka, which includes layers of eggplant, potatoes, and minced meat with bechamel sauce. Pasta with minced meat with the same sauce is called pastitsio. It is also worth trying aubergine salad melitzanosalata and thick yogurt with cucumbers and garlic tzatziki.
If you prefer fish to meat, then go to psarotaverna. They mostly serve fish courses here. Usually, such establishments are located near the coastline. In the local cuisine, not only fish but also mussels are very popular – they are often eaten raw, with lemon juice, and octopuses – they are added to fried eggs, salads, cooked with other seafood or served as a self-sufficient meal. Squid and cuttlefish are also popular. The fish here are fried, boiled, and steamed, and baked. They even make a paste of caviar. The latter, by the way, is called "taramasalata". Note that if in the menu in the dish you like is labeled "kat", "k" or has an asterisk, then it will be cooked from imported, frozen fish. Copyright www.orangesmile.com
Excursion over cultural sights of Patmos Island - 'must visit' points of interest
Patmos is known throughout the world as the "Island of the Apocalypse". It was here, as the legends say, where in one of the caves in the first century of our era John the Theologian …

Open
In the taverna-psistaria, you can usually order only meat roasted on charcoal or on a skewer. Here you should try pork chops called bisola, and paidakia lamb ribs, and bifteki cutlets. Kotopoulo chicken also has an unusual taste. If you want to have a quick bite, then it is worth to go to shish kebab souvlatzidiko. They usually cook here for take away, and the main dishes giros, which is something similar to shaurma, and souvlaki shish kebab. Those who like sweets should pay attention to the local yoghurt, which many eat as a separate dessert with honey and nuts. Baklavas, loukoumades, galaktoboureko (custard pie) or nuts in honey kataifi will become a wonderful dessert. On the island, they mostly drink coffee in a variety of types and fresh fruit juice. 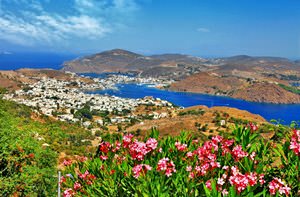 If you want to have a glass or two of local anise vodka ouzo, then it's worth going to the ouzeri. In fact, besides ouzo, they serve there a lot of snacks under the general name of mezedes. In addition to ouzo, you should pay attention to grape vodka rakia and local wines, which you will not find outside Greece. Retsina, Assyrtiko, Muscat, robola, savanjato, moschofilero, mantinia, nausea – the assortment is huge, you should just choose a drink to your taste. If on the previous day, you spent too much time tasting the alcohol, then patsas will help you get rid of unpleasant consequences. This soup is served in patsatzidiko, which are working around the clock. Patsas is not only a traditional but also quite a healthy dish.

This guide to cuisine and restauraunt in Patmos Island is protected by the copyright law. You can re-publish this content with mandatory attribution: direct and active hyperlink to www.orangesmile.com.
Patmos Island - guide chapters 1 2 3 4 5 6 7 8

Searching where to eat - restaurants and cafe on Patmos Island map

Cuisine and restaurants in the neighbours of Patmos Island

Leros Island
They prepare fish and seafood here in a variety of types – fried, stuffed, smoked, salted, marinated, added to a salad. The clams, which were found on the shore, are baked with lemon sauce or eaten directly from the shell. The octopus is added to fried eggs, squid is fried and served under the name of Kalamari. Cuttlefish with rice and spinach - soupia, boiled shrimps with ... Open »
Ikaria Island
However, meat is not only a part of fast food dishes on Ikaria. Definitely try paidakia, Greek lamb chops. Try stewed beef stifado. Moussaka is a delicious layered dish with ground meat, potatoes and eggplant. Pastitsio is pasta with ground meat and bechamel sauce. Loukaniko sausages, dolma (grape leaves stuffed with meat) and tefteli also deserve your attention. All the ... Open »
Kalymnos Island
There is also a wide range of soups on Kalymnos. Fasolada is a traditional Greek soup made with white beans. It was known in ancient times. Vegetarians will definitely like revithia, a chickpea soup. Kakavia is a traditional fish soup. Avgolemono is a classic soup of chicken broth, egg yolks and lemon juice. The best fish and seafood dishes can be found in psarotaverns. You ... Open »
Samos
The island of Samos is one of the richest and most fruitful islands of the Aegean Sea. Its main gastronomy feature is still the Vathy wine which is produced on one of the local wineries. A production of Muscat wine was started there far back to ancient times. Today this wine is exported to the various countries of the world. The island of Samos is a major manufacturer of dairy ... Open »
Amorgos Island
There is a wide choice of meat dishes on Amorgos. You can find delicious dolma here. It is a dish made of grape leaves and stuffed with meat. Moussaka is a dish, every tourist should taste. It is a layered dish made with minced meat, egg-plants and potatoes with bechamel sauce. Don’t pass by paidakia, a dish with lamb chops and roast potatoes. Pastitsio is a baked pasta ... Open »
Kos Island
Do not be surprised at the high prices for seafood courses – most often the cost is indicated per kilogram, and the real portion is likely to be much less and, accordingly, will be cheaper. If you want, you can specify, which fish you want to be cooked for you among the available ones. The assortment of seafood courses on the island is huge – from grilled octopus and ... Open »